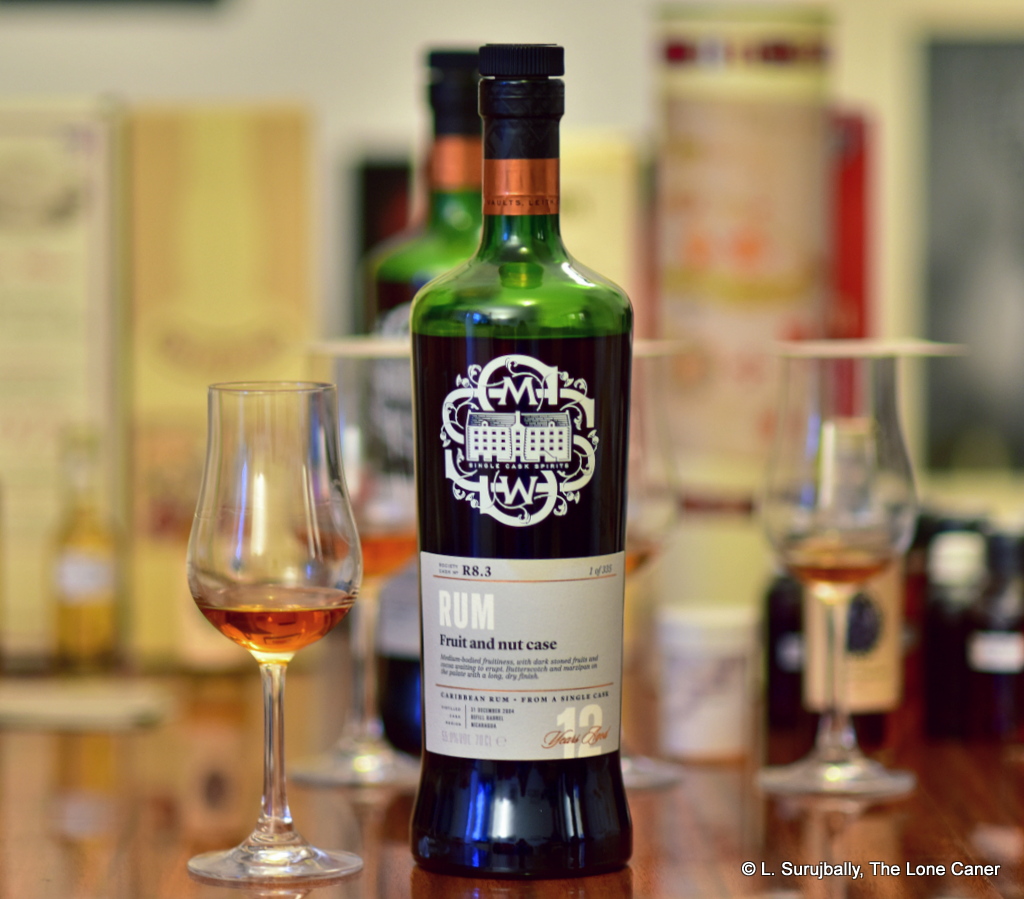 If two rums from the same company were made the exact same way on the same still, there are just a few things that would explain any profile variations. There’s the still settings themselves, because one rum might have different “cuts” than the other, or from higher or lower plate; there’s the proof point, stronger or weaker, at which either is bottled; and then there’s the barrel strategy, which is to say, the barrel itself and the duration of the rum’s slumber therein.

Last week I looked at a 12 year old Flor de Caña Nicaraguan rum from Compañía Licorera de Nicaragua, which came off their column still in some undisclosed year and was then aged in ex-bourbon barrels in Central America for more than a decade before being diluted down to a milquetoast 40%.  The 335 bottles of this Nicaraguan rum released by the Scotch Malt Whiskey Society were also 12 years old but allowed to flex the glutes at a solid 55% ABV, was in so many ways a better rum that one can only wonder at the difference. After all, isn’t tropical ageing supposed to be better? Stuff made at the distillery of origin from cane to cork should be benefiting from the voodoo of location, yet clearly that didn’t happen here. 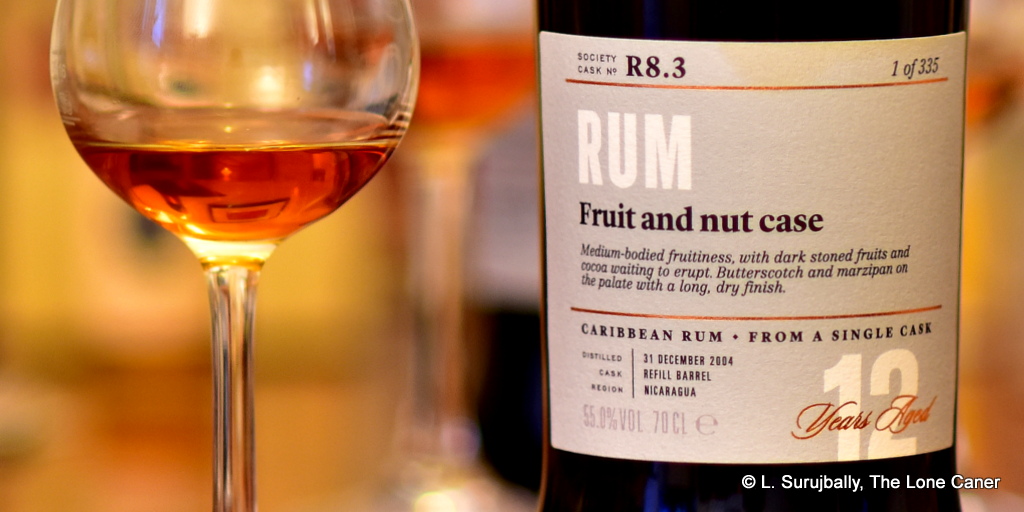 I mean, consider the profile from start to finish.  This SMWS rum was deep and forceful from the get go.  Caramel and toffee melded well with a woody component.  Dark fruits and raisins waft across the nose and combined with some apple cider, threatens to overwhelm the smell…but the toffee, caramel, oak, chocolate and tart yoghurt end up carrying the day.  It’s a bit sweet, with some bitterness after a while, and an emergent strain of coconut and marzipan, with the whole thing getting both darker and sweeter the longer it’s nosed

Palate?  Not bad at all. It’s woody, more so than the Flor de Caña product (and this is something  about their rums many have commented on before); caramel and bitter chocolate wrestle for dominance with dark Russian peasant bread. “It’s kind of like a thin Blairmont and without the complexity,” remarked my friend Marco, who was tasting it unenthusiastically with me (he was not a fan). I disagree there, because when you leave the rum alone for a while (okay fine, I forgot about it and checked it again an hour later, so sue me) it actually provides some nice notes of coffee, brown sugar, apples and vanilla – these temper the slight oaky bitterness we sensed, and while overall I think it is rather simple and the finish just repeats the chorus of notes from above, it’s a pretty powerful statement for the company…and what it could be doing.

I have no way of knowing in which year the Flor 12 was made – company-made blends like that stay stable for long periods and are tweaked to make them that way – and so a comparison between a continentally aged rum from a single barrel selected by a whisky maker, and a blended, easier product continuously being made by the distillery, lacks true comparability or real meaning; and will without question taste differently. And that’s even without going into the oft-repeated doubts as to whether even back then, their rums truly aged for X years.

And yet, and yet….perhaps it should not taste that different. The shared DNA should be clear, there should be points of similarity that would permit a reasoned comparison to be made, the family tree to snap into focus. Here, that’s hard. If pressed, I’d say I felt this one was less like the 12 and more akin to the superlative blue-bottled 15 year old “21” I’ve always liked — but that one was also quite different from other Flor products (it was an anniversary bottling, never repeated). 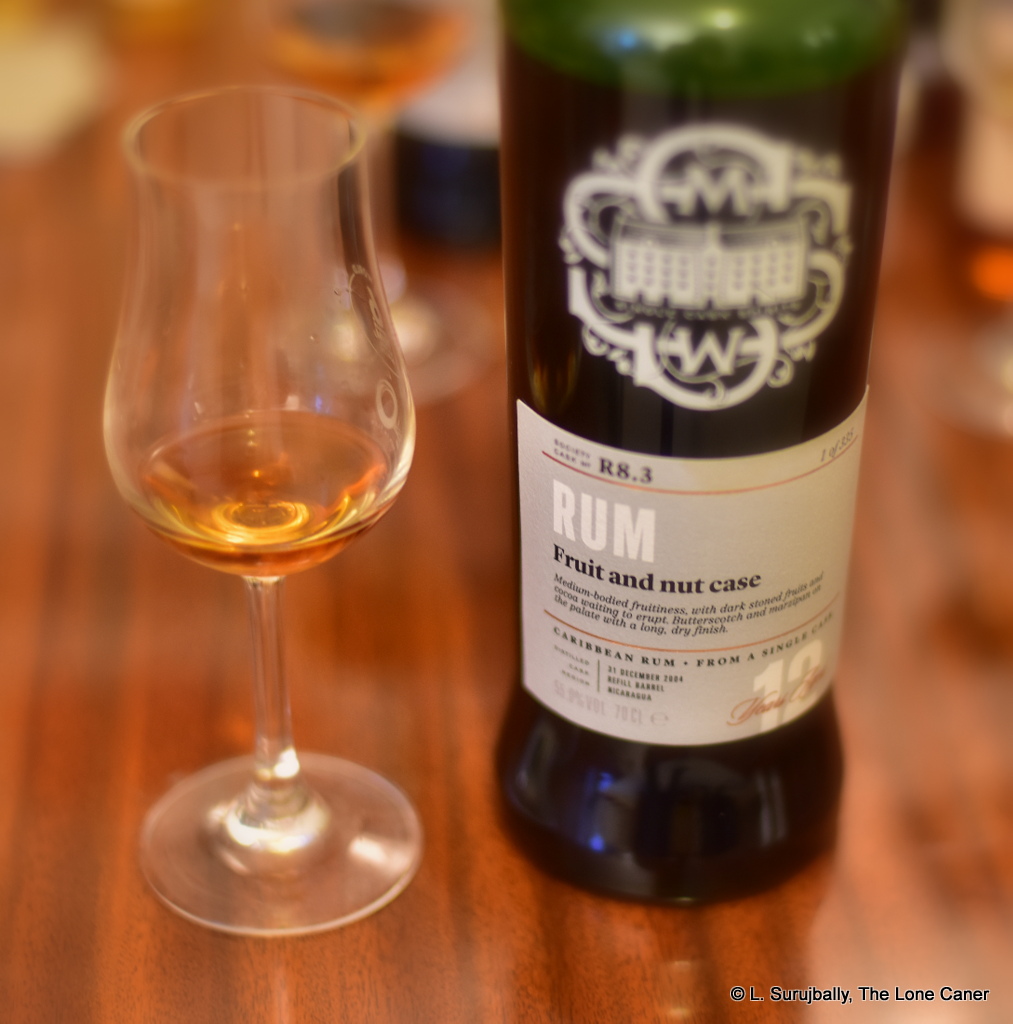 So taking all that into account, what made the SMWS rum from Nicaragua so relatively good? Maybe they really were made at different times and in different ways and came off the still already more like second cousins than brothers. But assume for a minute that they were the same up to that point:  given the similarity in age, similarity in barrels and assumed sameness off the still, the only thing left to consider is the wide divergence of the proof point, and the ageing location. The 40% TA variant is faint, lacklustre and ultimately boring – it in no way provides the complexity and solidity of tastes the CA 55% does.

I’m not trying to make a case for continental over tropical (aside from pointing out how pointless the discussion is from a taste perspective) – but I will go on record for suggesting that maybe one reason Flor de Cana can’t seem to increase its market share or get a bigger footprint on the connoisseur’s mindset, is because they have not had the guts to stake out the full proof market for their products, or even issue a limited edition series of single cask releases. And what that means is that other, smaller independents are stealing the thunder and reaping the rewards that by right should have been theirs. All because they couldn’t be bothered to move away from the traditional philosophy of their blenders.