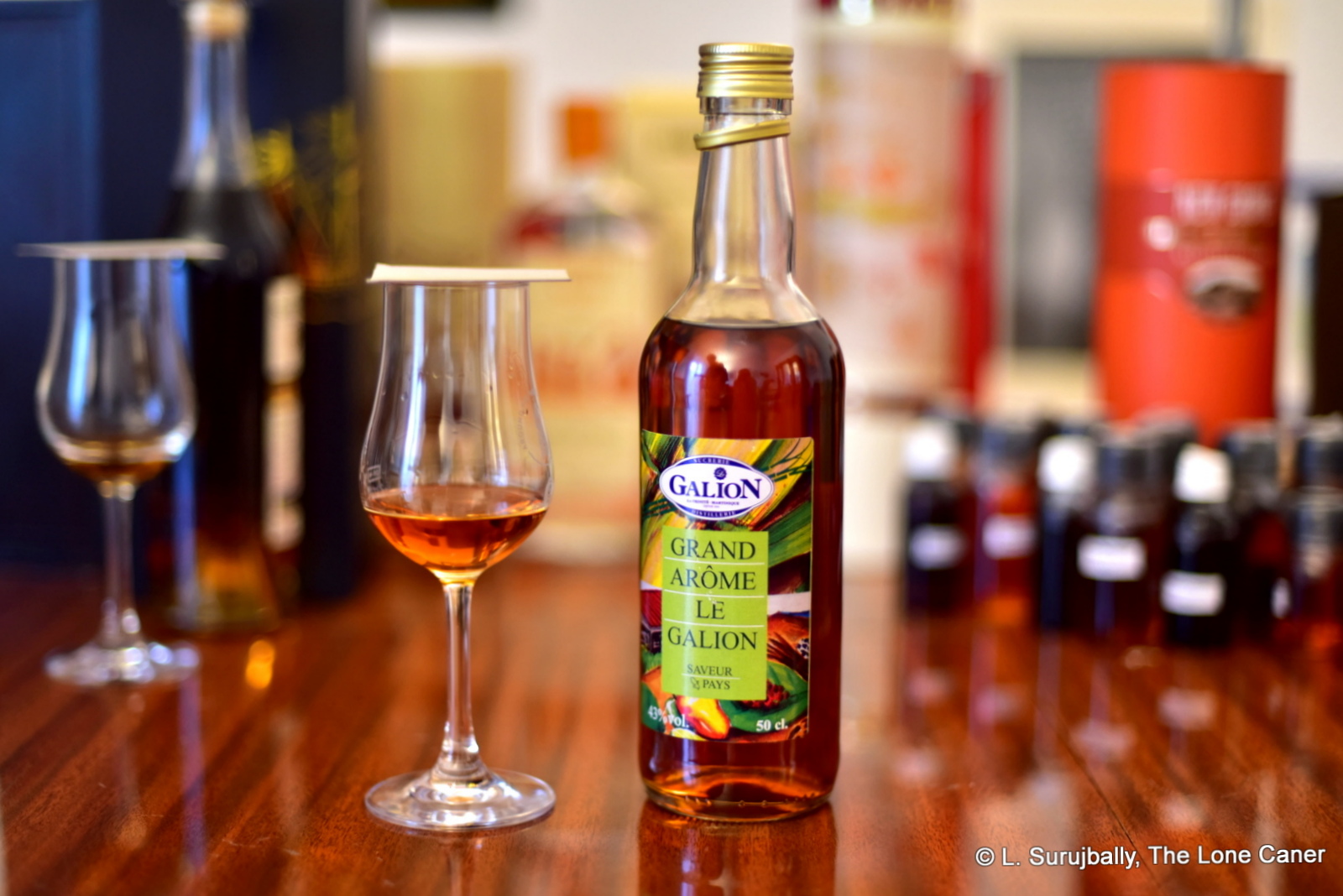 It was the words “Grand Arôme” that caught my eye: I knew that term.  “Galion”, which I seemed to remember but didn’t, quite. And “Martinique,” hardly seeming to go with either.  It had no brothers and sisters to its left and right on the shelf, which, in a shop stocking rows and rows of Plantations, Rum Nation, BBR, Saint James, Bally, HSE, Dillon, Neisson and all the others, struck me as strange (that and the rather “poor-relation-from-the-backcountry” cheap label and tinfoil cap).  What on earth was this thing?

I bought it on a whim and cracked it in the company of some other agricoles that night and did not one lick of research until after it was done: that was probably the right decision, going in blind like that, because here is a rum which lurks behind the Martinique canon the same way the bottle did on that shelf, and it’s rare enough these days to find a rum you didn’t know existed, especially from an island with so many different rhums of its own that are well known.

Rums and rhums titled “Grand Arôme” are high-ester products much associated with French island rhums in general (Reunion Island’s Savanna HERR in particular) and have a lot in common with the New Wave of Jamaican rums we’re currently seeing from Hampden, Worthy Park and others, with their own classification titles like Plummer, Wedderburn and Continental Flavoured.  They are all branches from the same tree – hooches with boosted ester counts to make for a enormously flavourful product.

And you could sense that on the nose, which was one to drive Cyrano de Bergerac into conniption fits.  It lacked the smooth warmth of an aged product, but whether it did or didn’t spend time sleeping in wood, it reeked like a white monster from Haiti, even at the low strength.  Olives, brine, licorice, black pepper, some vanilla, prunes and pencil shavings were immediately noticeable, in a sort of delirious free-for-all for dominance, followed by a lessening intensity over time as it opened up and provided some secondary aromas of vanilla, bags of fleshy fruits (peaches, apricots, prunes, plums, citrus), very light caramel and some aromatic tobacco. Not entirely original, but very very pungent, which for a rum issued at 43% was quite impressive – it was certainly more interesting than the light Cuban-style San Pablo or milquetoast Dictador Best of 1977 I happened to have on hand.  Actually, that smell it reminded me rather less of an agricole than of a Jamaican, with all the funk and rotten bananas and midden heaps (akin to the Long Pond TECC but nowhere near as intense). 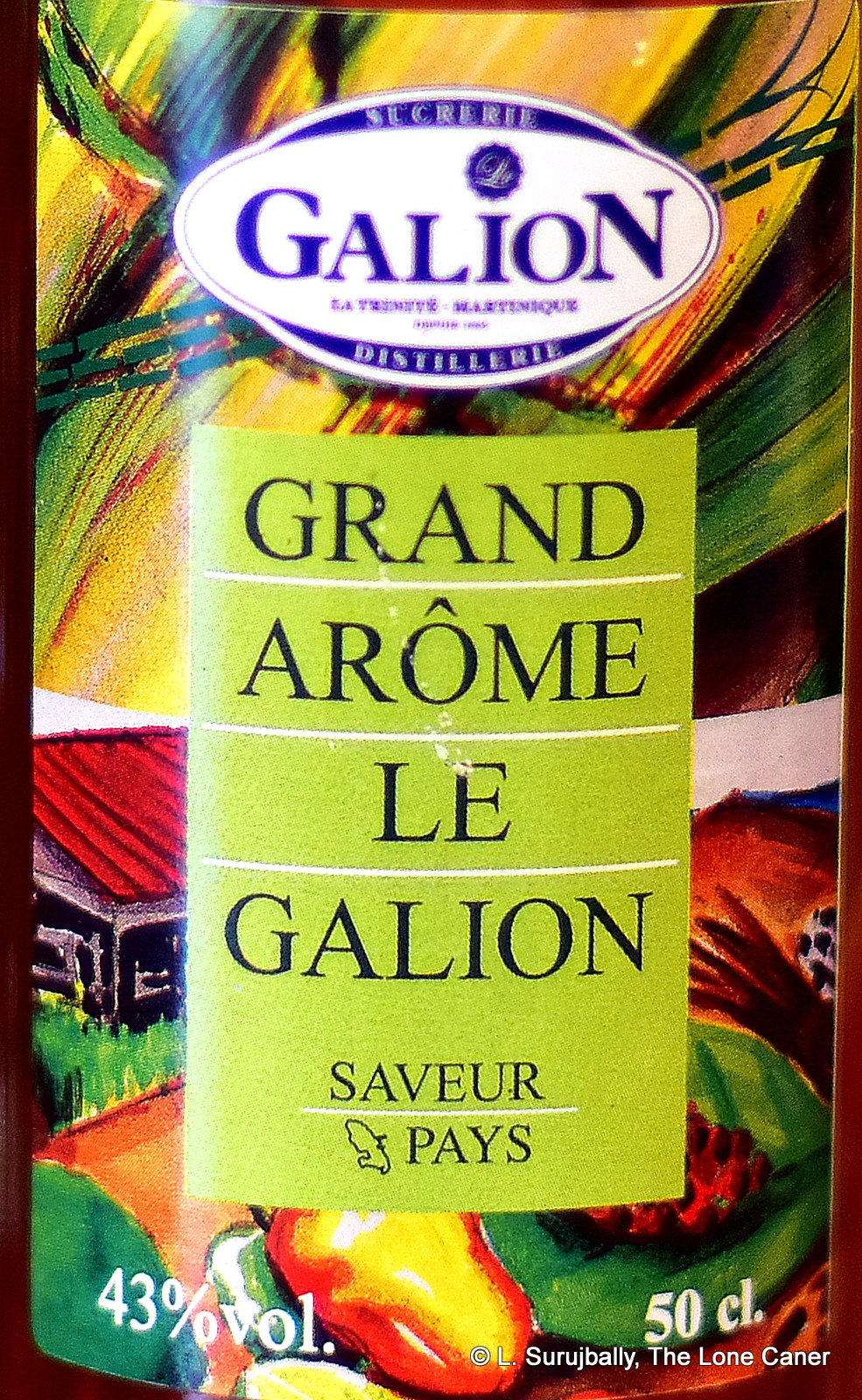 The pattern repeated itself as I tasted it, starting off sharp, uncouth, jagged, raw…and underneath all that was some real quality. There were caramel, salty cashews, marshmallows, brown sugar (truly an agricole? I wrote in my notes), plasticine, wax crayons, brine, olives, sugar water, pineapple, raisins, a solid citrus heft to it, and again a lot of varied ripe fruits (and some not so ripe that were just beginning to go off).  It was kind of sweet and salt and sour all at once – practically a roadmap to the esters it squirted from every pore. But what was nice about it, was that if left to rest, it turned out to be smooth enough to sip while retaining that edge of raw quality that would make it a great mixer, and it’s got all the character of profile which the San Pablo (both the Gold and the White) so conspicuously lacked.  Even the finish demonstrated that – it was short, but quite intense, with lingering notes of citrus, light anise, molasses, fruits, raisins and a last hint of salt.

My initial scribbles, transcribed here verbatim, read “Can’t tell what this is, need more background work. Says from Martinique, but it backs away from the crisp/clean agricole party line; seems more like a Jamaica-Martinique stepchild?” (Yeah, I really do write like that).  Because to me, it presented as a hybrid at the very least, suggesting intriguing paths for rum makers – a combination of agricole and molasses rum, made perhaps en passant, but certainly not lacking in brio, aggro or tempo.

So what is it? A local rum made for the backcountry and not for export?  A trial balloon of sorts to suss out the market? A failed attempt at something different, an experiment that somehow got loose from the lab? A bottle of the chairman’s private stash that got smuggled out in someone’s trousers?

Not quite.  It’s Martinique’s answer to the Jamaican bad boys, made by the last remaining sugar factory on Martinique, Usine du Galion, which has the added distinction of also being the last distillery on the island to make rum from molasses (they source cane from around the island, from areas not AOC labelled). It’s mystifying why there’s such a lack of awareness of the Galion rum itself, but on reflection it’s perhaps not so surprising, because — according to the estimable Benoit Bail and Jerry Gitany who I contacted about this odd lack of profile — the commercial bottled rum is peanuts to them. Their real core business is sugar, and that part of the operation is huge, their primary focus. They installed a column still in the factory to make rum in bulk, which is then almost all exported to Europe, used primarily in the tobacco/candy/pastry industries and pharmaceuticals (probably perfumes). 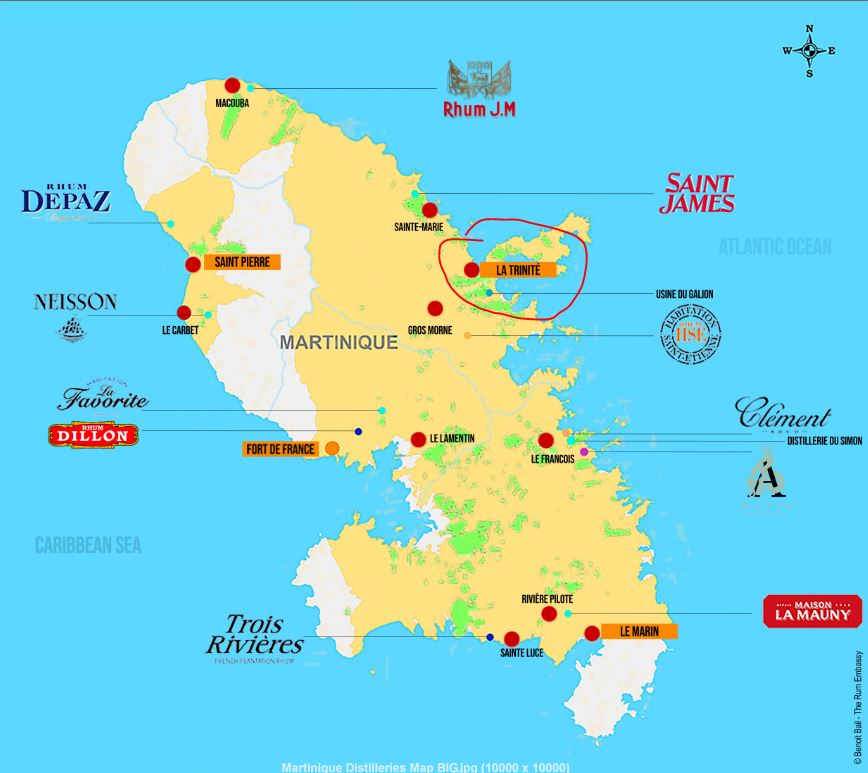 There are only two Galion rums I’m aware of at this point: a white I’ve never seen at around 50-55%, and this one at 43%, which, according to Nico Rumlover’s enormously informative article here, is made from molasses, fermented with the addition of vinasse for anything between eight to sixteen days in wooden vats, using indigenous yeasts in a continuous cycle through the columnar still.  Apparently it is unaged, with a small amount of caramel added to give the brown colour and generally limited to the ester midrange of around 500 g/hlpa – squarely in the no-man’s land between Wedderburn (200-300 g/hlpa) and Continental Flavoured (700-1600 g/hlpa).

And it’s a hell of a rum, I’ll tell you that – Matt Pietrek in his article on “Beyond Jamaican Funk” mentioned Galion and what they were up to, but missed this under-the-radar rum and suggested that if you wanted French Island ester bombs, Reunion was the place to go.  You might still have to, since the Galion is either available only at the factory, as a blender’s sample from Scheer in Amsterdam (at a whopping 61% ABV), or in some small, dusty forgotten shelf somewhere in Europe. But if you can pick it up, think of it as a high ester funk bomb that could be seen as a cheerfully insouciant French bird flipped at Jamaica; it proves emphatically that you don’t need to go all the way to the Indian Ocean to get yourself some, and provides a really cool comparator to those flavourful rums from all the other places we are only now getting to know so well.