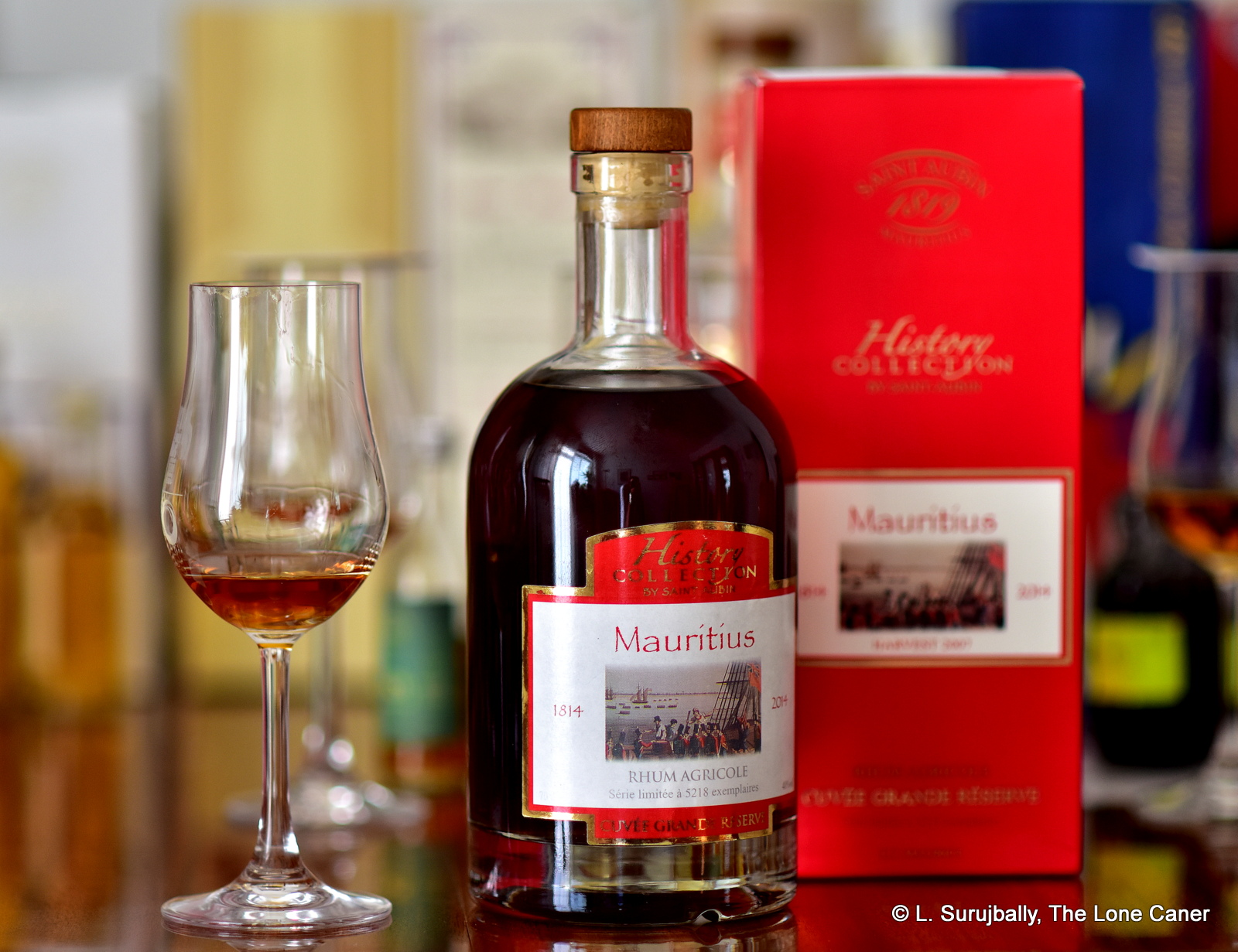 The History Collection 1715 “Isle de France” Cuvée Spéciale, in spite of being made from cane juice, reminded me rather more of an El Dorado rum than a true agricole, and with the History Collection’s 1814 “Mauritius” Cuvée Grande Reserve we’re looking at today, similar thoughts occurred to me…albeit about a different country. Perhaps that’s the marker of a rum that lingers in the mind and titillates the senses – it reminds you of something, but pinning it down proves elusive…and then it turns out to be quite a distinct product in its own right, as this one is.

So, that said, and similarities aside, it’s instructive to assess the achievement of St. Aubin in producing a rhum that — even at 40%  — was no slouch to sample: it had the same rich and fruity aromas of the Isle de France, brown sugar, cherries in syrup, pineapple, peaches, apricots, vanilla, and to distinguish it from its sibling (perhaps), also a series of coffee and musty, sawdust-y, cereal-y back-end notes.  Sprinkled with raspberries.  What with a hint of chocolate in there someplace, I was actually moving away from comparing the nose to an El Dorado, and relocating myself to Colombia, know what I mean?  This thing was like a crisper Dictador 20 with just enough of the agricole background shimmering through to provide a clue as to its origins. 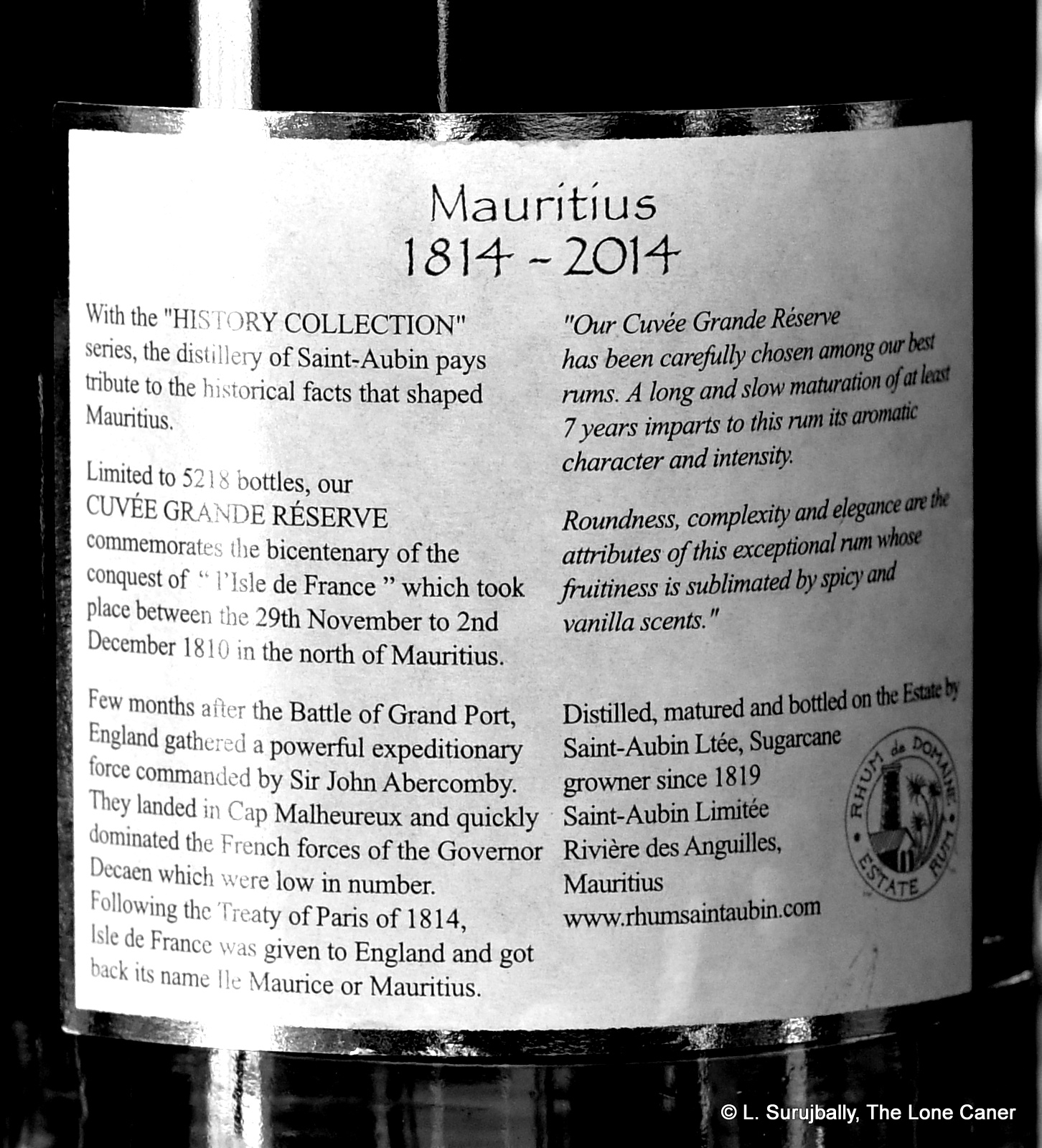 The nose told a tale that would be repeated right down the line, and what I smelled was pretty much what I tasted, with a few variations here and there.  It was light and clean, yet displaying darker, muskier spicier notes as well: vanilla, coffee, licorice and some sharp tannins, with the musty long-disused-attic tastes remaining.  Some fruits – peaches and cherries for the most part – stayed in the background.  The core was anise and sawdust and unsweetened chocolate, and overall it presented as somewhat dry.  Quite nice — if it fell down at all it was in the finish, which was more licorice and chocolate, thin tart fruits (gooseberries perhaps) and after a few hours, it took on a metallic tang of old ashes doused with water that I can’t say I entirely cared for.

Some background. The date on the bottle (1814) relates to the the Treaty of Paris signed at the end of the Napoleonic Wars by the warring nations of Europe, and it was this treaty which gave Guadeloupe back to France (it had been ceded to Sweden (!!) for a while), but which also formally confirmed Mauritius to be a colony of Great Britain (who had held it since 1810). I was informed that the rhum is cane juice based, 30% pot still 10 year old from 2004, and 70% column still (stored for six years in an inert inox tank), — which therefore does not makes the rum a 10 year old in spite of the bottling in 2014, and so I have had to retitle and amend this post, after checking with St. Aubin directly. Oh and there are 5218 bottles in the outturn, so probably enough for anyone who wants one to get one.

As noted on the Ile de France, by the way, you should expect some dosing here (caramel and “natural flavours”, not sugar, I was informed), and that’s evident after some switching back and forth between a true agricole and this one…not enough to mess it up, but noticeable enough after a while.  On the plus side it gentles the whole experience down a mite, makes it smoother and quieter and more sippable for those who like softer profiles to their rums (plus of course, sweeter ones); on the negative side it dampens and mutes a profile which doesn’t really need that kind of tampering – it’s good enough as it stands.  Underneath the muffling effect of the caramel addition, you can sense what it was and what was there, but it’s like listening to music underwater…the full impact and effect of the symphony is lost. And that’s a shame because I’d be much more interested to see what it was like when pure – based on the quality of what I was sampling, that was probably quite something.

As stated above, current versions of the rum are only partly 10 years old, although the components remain the same as older ones – the 10 YO pot still component replaces the 7 YO portion. The label on the bottle I was sold was an older one which is now being changed to eliminate the age statement.  So even if your label says 7, you’re not precisely getting that.