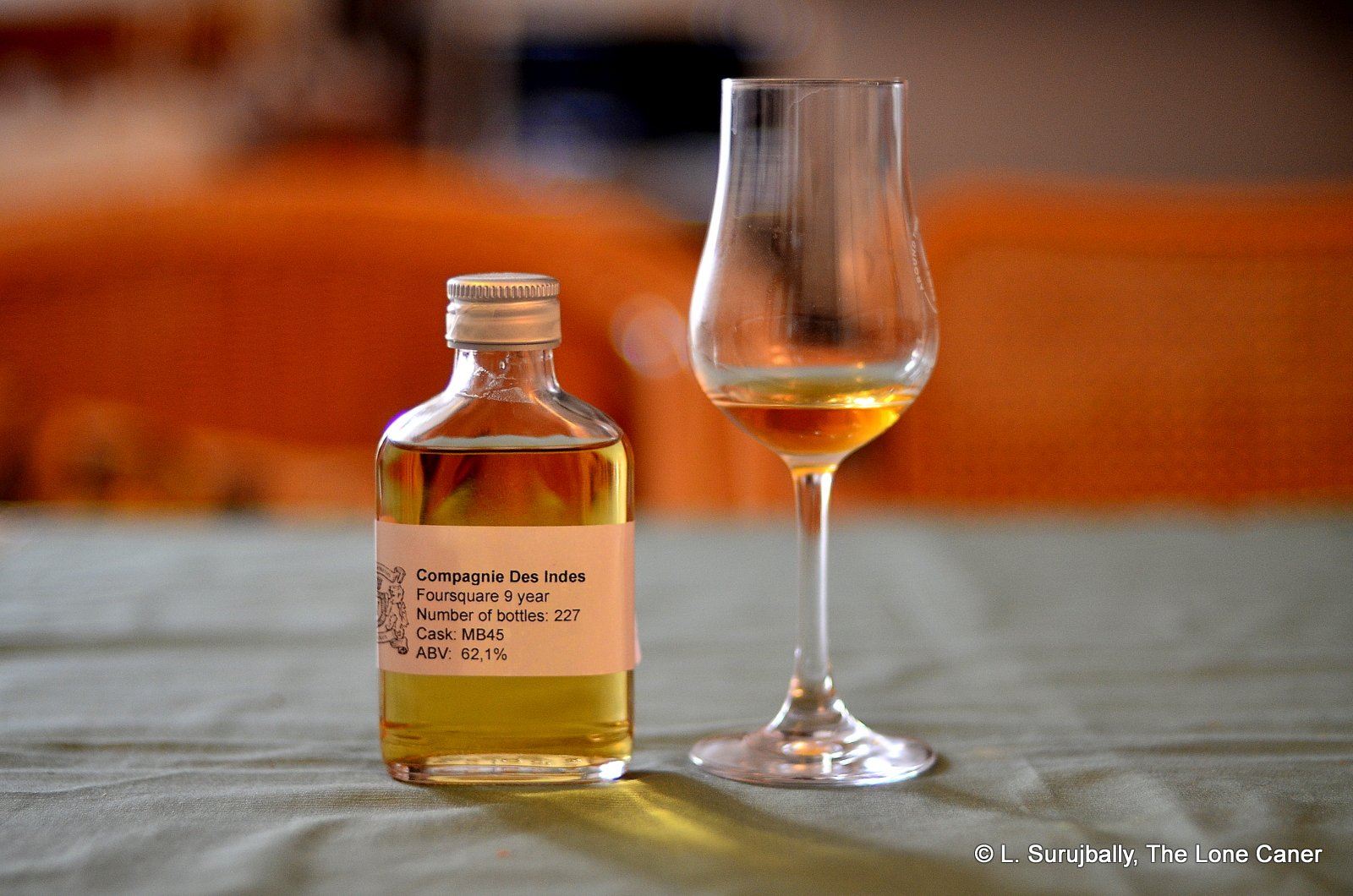 After messing round with other Bajan rums for a while, I finally came to the Compagnie des Indes FourSquare 9 year old, and had to concede that even setting aside the headline-grabbing 2006 or Triptych or Criterion releases, this was what I was looking for and which almost none of the three other caskers — the Cadenhead BMMG and 10 year old and the Isla del Ron — had not provided.  Mount Gay’s indie fullproof bruisers were certainly interesting and made powerful statements for their distillery of origin, but either Florent picked more judiciously than Cadenhead or the Isla del Ron, or the 4S juice in this instance was simply better…because for a nine year old rum aged in Europe, it really was a tasty piece of work.

There’s a full bio of the Compagnie des Indes available, so suffice to say I need only add that the Florent’s outfit is still going full blast in 2017, and has added to its stable of standard strength rums every year, as well as taking notes from the happiness of the gloating Danes up north (and the envy of everyone else) and began releasing cask strength variations starting from 2016 onwards, to the relief and applause of the less fortunate proles who previously had to beg and genuflect and possibly hock the family jewels to get themselves some.  This Danish-edition rum was a rip snorting 62.1% and one of 227 bottles with the original distillation in 2006 and bottled in 2016 (Barrel #MB45), and now you know pretty much all you need to be going along with aside from the tastes, and we’re going there right now 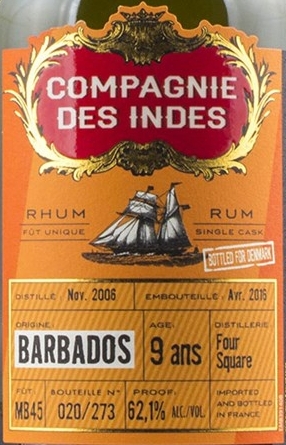 Right away, the aromas of salty, oily brine (like a really good olive oil) and florals emerged, better integrated than all the other Bajans which were being tried alongside it; and for 62.1% the control over the release of all that sharpness was amazing, because it seemed actually quite gentle for the strength, like a tiger pretending to be a tabby (water helps even more).  Other delectable scents emerged over time – acetones, cherries, peaches in a light syrup, more olives, cherries, even some bananas and raisins here and there – it was really quite nice and the best part was, it lasted for a good long time.

I  thoroughly enjoyed the taste as well: something of a Demerara seeped delicately into the profile here, some deeper caramel and licorice tastes, mixed in with fried bananas, red olives brine, and yes, peaches in cream, cherries and some tart apricots, plus a green apple slice or three, all covered over with  drizzle of lime.  And again I’m forced to mention that the control over intensity and stabbing pitchforks of proof was again masterful: concrete solid, massively rooted in rum fundamentals, assertive and aggressive like a boss, and tasty as all get out.  Even the finish did not falter: longish, very warm, with closing notes of cider, apples, salted butter and caramel, florals and fruit, all coming together and concluding the night’s entertainment with a nice exclamation point.  And a bow.

It always makes me wonder who gets the kudos when a rum like this succeeds.  After all, one could argue that CDI just decanted a third party barrel from FourSquare and bottled and sold it, so shouldn’t all the hosannas go to Richard Seale’s boys, and hence increase their sales?  Well, kind of. Certainly there’s no gainsaying the overall quality of rums from the distillery of origin (even if the ageing was likely done in Europe by Scheer)…yet as we observed with the indie Mount Gay rums we tried before, cask strength and a respected house name do not always a superlative rum make.  The discernment and selection of the guy doing the choosing of which  barrel to buy, also comes into play and I think they did well here, really well.  I’m not a dedicated Foursquare deep diver and uber-fan like my friends Steve James, The Fat Rum Pirate and Rum Shop Boy (they know every one of Richard’s bottlings ever made, by their first names), but even I have to say that  this sub ten year old rum aged in Europe does both the Compagnie and Foursquare damn proud…and given its quality, deservedly so.