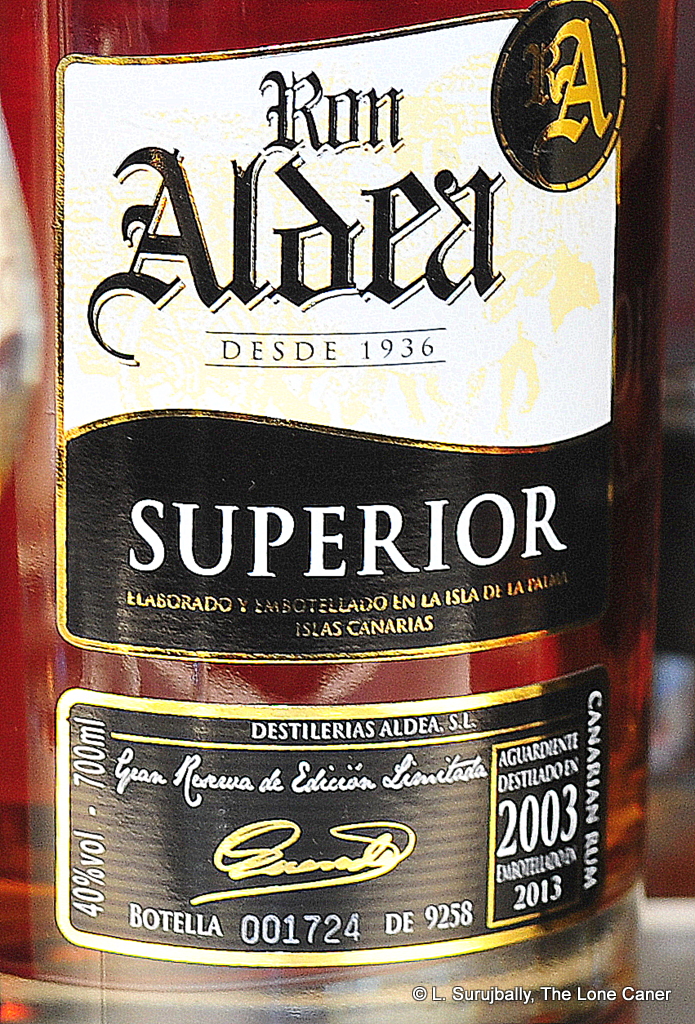 With respect to companies which don’t want to make (or be seen to make) spiced or flavoured sugar bombs, it’s always instructive to observe the techniques that they use to avoid the dreaded “A” word. Some play with ageing or blends, some with finishing (the new El Dorado 15 year old series comes to mind), some with unorthodox schemes (like Lost Spirits or 7 Fathoms), some with toasting, but all are trying to do the same thing – impart an extra smidgen of taste to their rum, without actually adding anything to it, which I’m sure makes any rum nerd’s heart pitter-patter happily. Ron Aldea, a rum company from the Canary Islands, in the place of combined finishing and ageing regimes such as Gold of Mauritius and Mauritius Club utilize, prefer to experiment with their cask strategy – in this case they used brand new American oak barrels with heavy toasting levels, which I take to mean an inordinate level of char – but fortunately without any wine or port sloshing around inside. 1

For those who didn’t read about the Caña Pura White Rum (I felt it tried unsuccessfully to straddle some kind of middle ground between soft mixer and individualistic white), it’s worth mentioning that all Ron Alddea’s rums derive from cane juice distilled to 62% in a 150-year-old, wood-fire-fed double column copper still — made by the French firm Egrott — in the Canary Islands. For those interested in historical details of the company itself, the Caña Pura review has it at the bottom of the page. 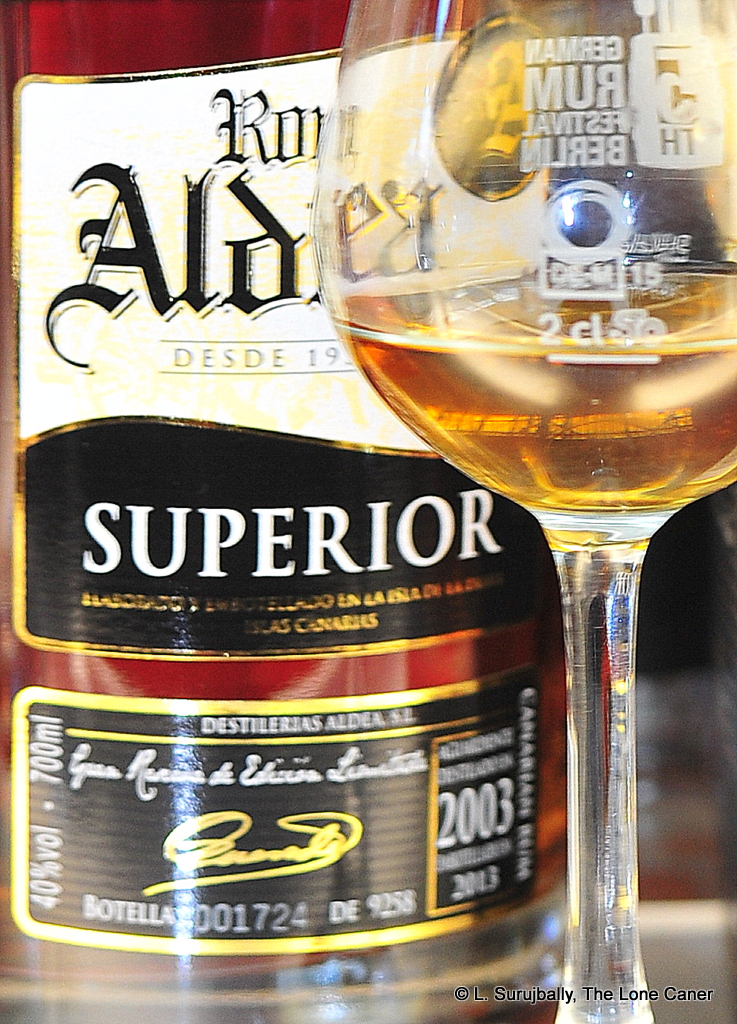 This particular rum, renamed the Maestro for the 2016 release season, was the 2013 edition limited to 9258 bottles, and dialled way down to 40%. It was a darkish gold colour, and initially presented a nose that was quite lovely…breathy even (“Hi sailor-man…want a good time?…”) before thinning out and gasping for air, which is a characteristic all 40% rums share, unfortunately. Still, all was not lost – fresh peaches and apricots were there, weak but accessible, plus clearer, purer aromas – cucumbers, pears, sugar water, cut grass in rain, herbals, and a last rounding off of vanillas and a vague bitterness of oak. Char or no char, ten years in new oak was discernible, though well handled and not overbearing,

The agricole origin of the rum (perhaps I should call it rhum) develops from the hints given in the nose, and blossoms into something much more in the realm of such products: grassy, clear vegetals; more peaches and apricots and softer fruits, yet with some tartness, like unripe but yellow mangoes, under which coiled a creamier background of soft sweet white chocolate coffee and sugar…almost a cappuccino. The divergence from the norm came with an odd taste of ashy mineral-like notes that fortunately stayed well in the background, but were definitely noticeable. The finish was about standard for a 40% rum – short and heated, quite nice in its own way — not overly complex, just as comfortable and easy as an old chesterfield, with closing hints of chocolate and vanilla, and very little of the spicier, fruity notes. Perhaps that was to its detriment – the integration of these various tastes matters, and here it was impossible to pick apart individual notes – but I acknowledge that’s a matter of private opinion. And as a matter of record, I did enjoy the Superior quite a bit.

Overall, for its strength and age it’s a pretty good mid-tier rum (or rhum). It’s not as distinctive as the El Dorados, say, or the various Jamaicans, or even those from St Lucia or the French islands, but I’m not sure that’s the intent. Santiago Bronchales, who I’ve been watching and talking to since his involvement in the interesting if flawed Ocean’s rum, is more of an experimenter, not a copier or a follower-on of old traditional rum profiles, and likes to go in original directions. He takes what he can, does what he is allowed, and is trying to come up with his own version of the perfect profile at the strength he knows will sell. The Superior 10 year old he’s made here is another step on the road to discovery of his own personal truth, and is an interesting rum to try when you have the chance.