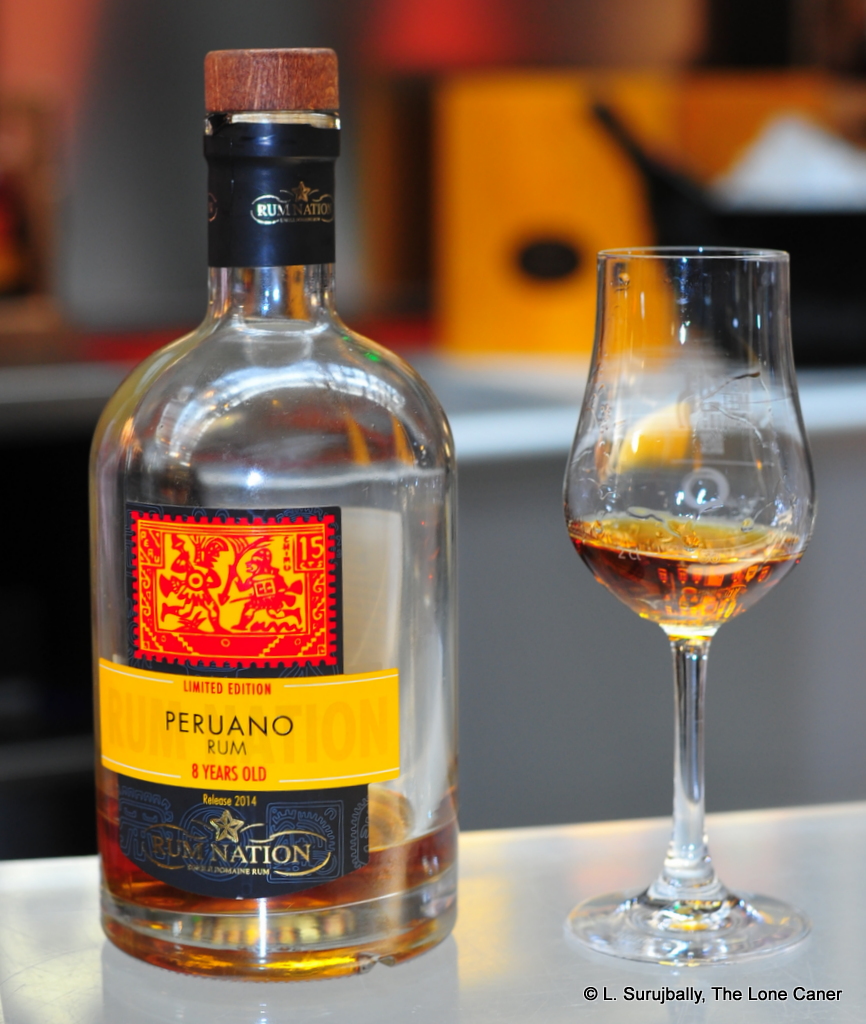 It’s been quite a few months since I picked up a Rum Nation product to write about.  This is not to say that they have either lapsed in sleep or are resting on the laurels of past achievements, since just the other day they put out some promo materials for two new Guadeloupe rums I’m going to keep an eye out for.  However, today I wanted to look at one of their other countries’ offerings, the Peruano 8 year old.

Aficionados are no strangers to rums from that country: both the Millonario XO and Millonario 15 soleras hail from there, Bristol Spirits pushed out an 8 year old Peruvian I quite liked, and Cartavio continues to issue rums such as their own XO Solera — all of which adhere to the medium-to-light, easygoing and sweet profile that excites admiration and despite in equal measure depending on who’s talking.  This one matches most closely with the Bristol Spirits version, and that was no slouch…it made me reconsider my decades long love affair with pungent Jamaican and Demerara rums (just kidding). 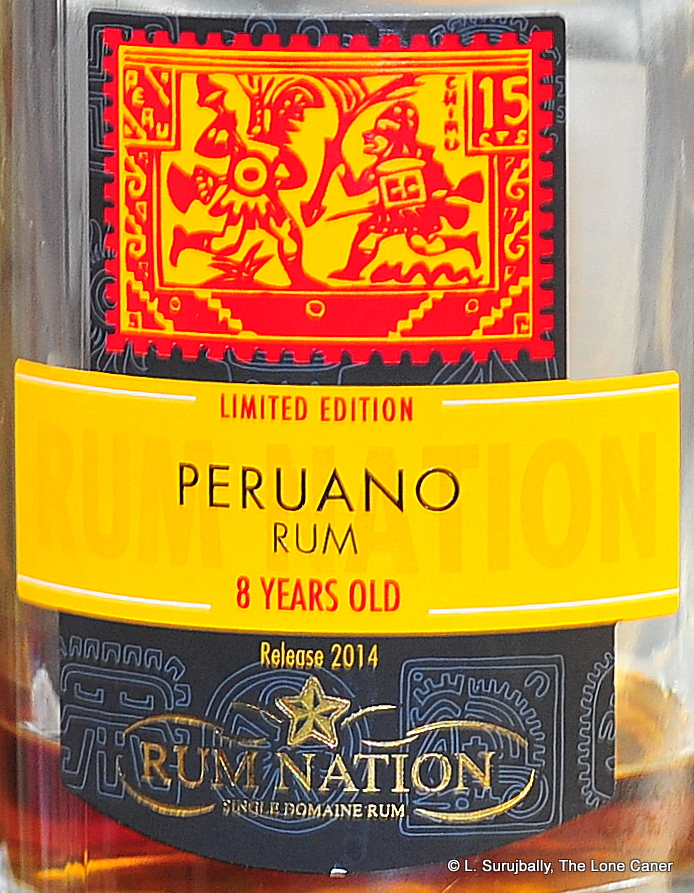 Anyway, the Peruano 8: an dark gold-copper coloured rum, clocking in at 42% ABV, and deriving from the Trujillo gents who also make the Cartavio XO. Fabio told me once that some years back he was seeking a very light, delicate rum to take on Zacapa, and thought he found it in Peru, in the Pomalca distillery which also produces the Cartavio on what looks like a muticolumn still.  The initial rums he got from there formed the Millonario 15 and XO rums, and these were successful enough for him to issue a Peruvian in its own right, aged for eight years in bourbon casks. No more mucking about with soleras here.

I certainly approved.  Rums like this are easy going and don’t want to smack you over the head with the casual insouciance of a bouncer in a bar at the dodgy end of town, and sometimes it’s a good thing to take a breather from more feral and concussive full proof rums.  This one provided all the nasal enjoyment of a warm chesterfield with a couple of broken springs: lightly pungent and aromatic, with a jaggedly crisp edge or two. Cherries, apricots, cloves, nutmeg, some vegetals, chocolate, a slice of pineapple, and sugar water and cucumbers.  Kinda weird, but I liked it – the smells harmonized quite well.

The palate was pleasant to experience, and brought back to memory all other Peruvians that came before.  The light clarity — almost delicacy — was maintained and demonstrated that it is possible to sometimes identify different rums made from the same source…here it was almost self-evident.  Tannins, vanillas, fruits, brown sugar (too much of this, I thought), some caramel, all melding into each other; peaches in unsweetened cream, some easy chocolate and pineapple flavours and a tart cherry and citrus blast or two allowing a discordancy to draw attention to the softness and lightness of the others. What so distinguished this rum and the others from Peru (including Bristol Spirits’ own Peruvian 8) is the way the various components balanced off so no single one of them really dominated…it was like they had all learned to live together and share the space in harmony.  Finish was perfectly fine (if short): sweet, warm, and very much like a can of mixed fruits in syrup just after you open it and drain off the liquid.

I’ve unwillingly come to the conclusion that many Spanish style rums — and particularly these from Peru which I’ve tried to date — almost have to be issued at par proof points.  There’s something about their overall delicacy which mitigates against turbocharging them too much. The Millonario XO went in another direction by the inclusion of sugar (for which many have excoriated it), but one senses that were it and its cousins be too strong, it would destroy the structural fragility of the assembly that is their characteristic, and they would simply become  starving alley cats of glittering savagery and sharp claws, and that does no-one any favours

The downside of that approach is that it limits the use such a rum can be put to.  Rums this light don’t always make good cocktails, are more for easy sipping (that’s my own personal opinion…you may disagree), and to some extent this drives away those guys who prefer the dark massiveness of a 60% full proof.  Still, I’ve made the comment before, that I drink different rums depending on how I’m feeling, and for a pleasant sundowner on the beach when it’s time to relax and unwind (and I’m not unduly pissed off at the universe), this one ticks all the boxes and is a pleasant reminder that not all rums have to beat you over the glottis to get your attention.

It could just be me, but I think there’s something else lurking in the background of this rum.  It’s slightly deeper and smoother in profile, and definitely sweeter, than the Bristol Spirit’s rum which is the same age. Some subtle dosage, perhaps? No idea.  If so, it really wasn’t needed…it actually detracts from the profile.

Fabio considers this another one of his entry-level rums, and whenever he says that, I always laugh, since his products are usually a cut above the ordinary no matter what they are.