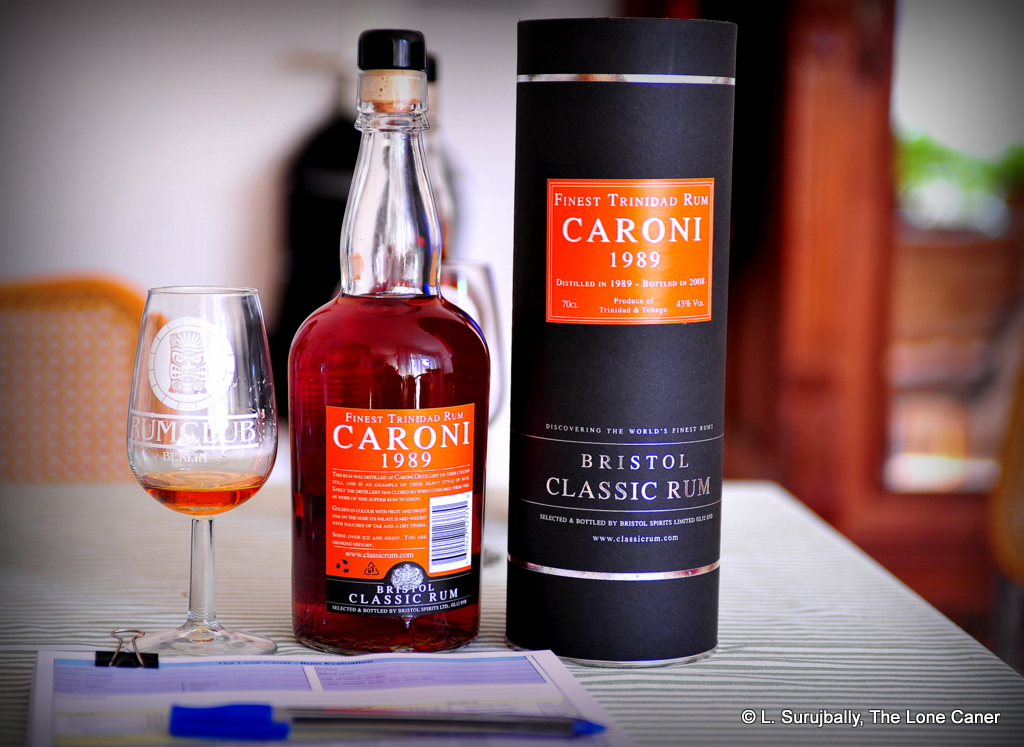 Another, slightly lesser brother from the same mother. It stands in the shadow of the company’s magnificent 34 Year Old.

It’s possible that Bristol Spirits decided to play it safe (again) with the 43% expression from the closed Caroni Distillery of Trinidad…y’know, give it a wider audience than the drop-down-dead-of-old-age 34 year old 1974 variation which would dig a deep hole in both your wallet and your marriage. Or maybe that’s how the barrel played out when it came time to bottle the liquor (notice that 2008 was the same year they produced the 1974, so both were issued simultaneously). It’s good, but in my own opinion, could have been a shade better — their contention that they’re happy with the strength at which they issue their rums always struck me as taking the road more commonly travelled instead of breaking out to chart their own path.

Which is not to say that anyone buying the 19 year old will be disappointed. Even the appearance is quietly dramatic and eye catching, and adheres to Bristol’s standards: a psychedelic orange label on a barroom bottle with a plastic tipped cork, all housed in a cool black torpedo tube lettered in silver. I love Velier’s minimalism, but must concede I have a soft spot for Bristol as well.

Anyway, the rum itself: column-still produced, it was a dark golden brown liquid in the glass, displaying slow, chubby legs draining away down the sides. At 43% it was mellow to smell, dense and almost heavy with dark cherries, hibiscus blooms, licorice and a touch of brown sugar and molasses.  Yet at the same time it was also quite clean on the nose, warm, without any overweening alcohol sharpness that would have debased the rather luscious aroma.

To taste, the Caroni 1989 would not be described as “heavy,” as opposed to a full-proofed Demerara hailing from a wooden still, or a massively aged Jamaica rum flinging dunder and funk in all directions, both of which really could be. It was, in point of fact, a curious and delicious melange of textures that accurately navigated to being a medium bodied rum without actually being a pussyfooted one-hit-wonder. A column still distillate produced this?  Wow. Rich — but not overwhelming — notes of anise, fleshy fruit on the edge of ripeness, brown sugar, licorice, some molasses started things going, and after opening up you could tell the shared DNA of the 1974 (which I was tasting side by side): it was a less aggressive, easier version of that growling geriatric Trini. There were faint tastes of black olives, smoke, tannins and smoke, mixed in with road tar (this actually sounds worse than it is, trust me). I could not detect any of that salt and nuttiness that I remarked on the 1974 and it was a very pleasant drinking experience all ‘round…until the end.

I’m going to spare a word about what to me was a disappointing finish for something so aged.  It was lacklustre in a way that was surprising after the quality of what had come before, and which diminished the positive impact of the preceding nose and palate.  This is where the 43% works against the rum and lessens the overall experience I’m afraid (some may disagree).  Sure it was clean and warm, even a shade dry, on the exit, with caramel and vanilla and smoky notes to finish things off…but it displayed a too-short attitude of good-enough “git-’er-dun” that offended me in a vague way. So yeah, the 43% does make a difference (just as 35% or 55% would).

I’m sort of conflicted on this Caroni.  I certainly liked it enough: it’s a rambunctious, delicious rum with a great profile and sleek, supple tastes to it — but which chokes a little on the back end.  The question is – as it must be – whether it’s as good as the 34 year old expression, or just different.  It’s probably leaning more to the latter. At the end, while it’s not quite as remarkable as its sibling, if you’re on a budget and want a Caroni, this one is an absolutely decent buy (I paid €130 for it), and you won’t feel short-changed if you spring for the thing, my whinging on the finish aside. Because it’s a Caroni and because I wanted to give the distillery some exposure, I bought it (and four or five others from various makers)…yet personally, I’d prefer to wait and save for something a bit more mature, something…well, beefier.  Like the 1974. Even at 46%, that one at least had some of the courage of its convictions.