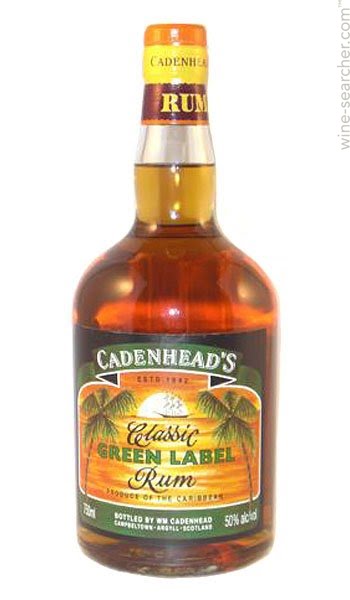 It looks like a rum and occasionally smells like one, but it sure doesn’t always feel like one; Cadenhead’s policy of making the Classic without any additives or subsequent filtering gives it a less voluptuous body than the average and an overall whisky character that only a psychologist could unravel. Decent drink for those who like a little danger and seeing how rums can go to the edge, though.

This is as strange a rum as I’ve ever had, and was a selection of the November 2009 gathering, where nothing but rums were served, and it went head to head with two other rums: the Zaya 12 year old (and the winner by a nose, ha ha), and the Appleton Estate Master Blender’s Legacy (which was the most expensive and opined as the least value for the money).  The Cadenhead Green, for all its ~$75 price tag, was considered middle of the road.

It’s a strange one, this. For one thing, I have no idea how old it is. Nor am I entirely certain where it comes from, although I believe it is a Demerara rum that was then further refined in Scotland and watered down a tad to bring it down from cask strength. The website states it remains untreated and no additives brought in for either colour or taste, and its bold taste makes that likely to be true.

Cadenhead Distilleries is a scotch maker, not a rum maker (actually it’s now owned by the Campbeltown distiller J.&A. Mitchell and Co., which runs the  Springbanks distillery in Argyll), but perhaps they took a gander at what good products came out of Bruichladdich’s Renegade line and followed suit. For whatever obscure reason, Cadenhead has chosen not to reveal the provenance of this rum (the “Demerara” appellation refers to the dark colour and body, not the source), but a few people on the internet have speculated it’s Jamaican, or possibly even Cuban – that would be illegal to market in America, so if anyone bought one of these in the US, I’d be interested to hear about it. It’s listed at 50% ABV, making it an fullproof Rum (I use the word “overproof” to denote rums that are insane for all practical applications…you know, like 70% and up).

The nose is candied, with hints of cinnamon, charcoal, and marshmallow. Dark gold in color, clear. It settles out with chocolate notes, caramel, and burnt pineapple, lightly tingling at the back of the tongue. Strong finish and some bite on the way down. I’d recommend this one with a drop or ten of water plus some ice, unless you’re a peasant like me and just say to hell with it and destroy it with a coke (just kidding). Not really a good sipping rum — it’s not subtle or smooth enough for that – but I’ll say this: the thing had character, and kicked back like a spavined mule after the first few glasses. I’m hoping to get another bottle to see if the first was just me. You’d think that our whiskey drinkers would have been in transports of ecstasy with the Green, given its resemblance to a decent scotch, but in fact the opposite was true, and it came in, as I mention above, in the middle. Given our evolution since then, it’s possible that this opinion might change on a second go-around. (2014 Update: it did, and for the better)

Did I like it?  Tough question. I’ve made no secret of my dislike for distillers who refuse to put provenance or age on their labels – it’s too much like a cheat, giving the buyer no chance to make a first-pass determination of quality, or rate it against other, similarly-aged products –  and that goes double for the higher priced babies, where a buyer needs to know what he’d forking out his dough for. Whisky – Scotch whisky – has its rules about what kind of hooch can bear the highland name, but the plebian and slightly disreputable origins of rum seem to mitigate against rum distillers doing the same.  I admired the strength and character that the Green had, and its body was excellent. The strength stiffened the starch in its spine quite well and the complexity was admirable.

So I’ll split it down the middle: I’d recommend it unhesitatingly for true rum aficionados who dislike adulterations, and dedicated whiskey drinkers (these are the guys who have their snoot glasses in one coat pocket, who sniff and sip and gargle and then rinse with distilled water).  For more middle of the road folks I’d say “Give it a shot, for here is something remarkably different you won’t soon forget.”  And for those who just want a decent mixer, I’d suggest getting something cheaper and sweeter to put into your cocktail.

Fairer than that I just can’t be.