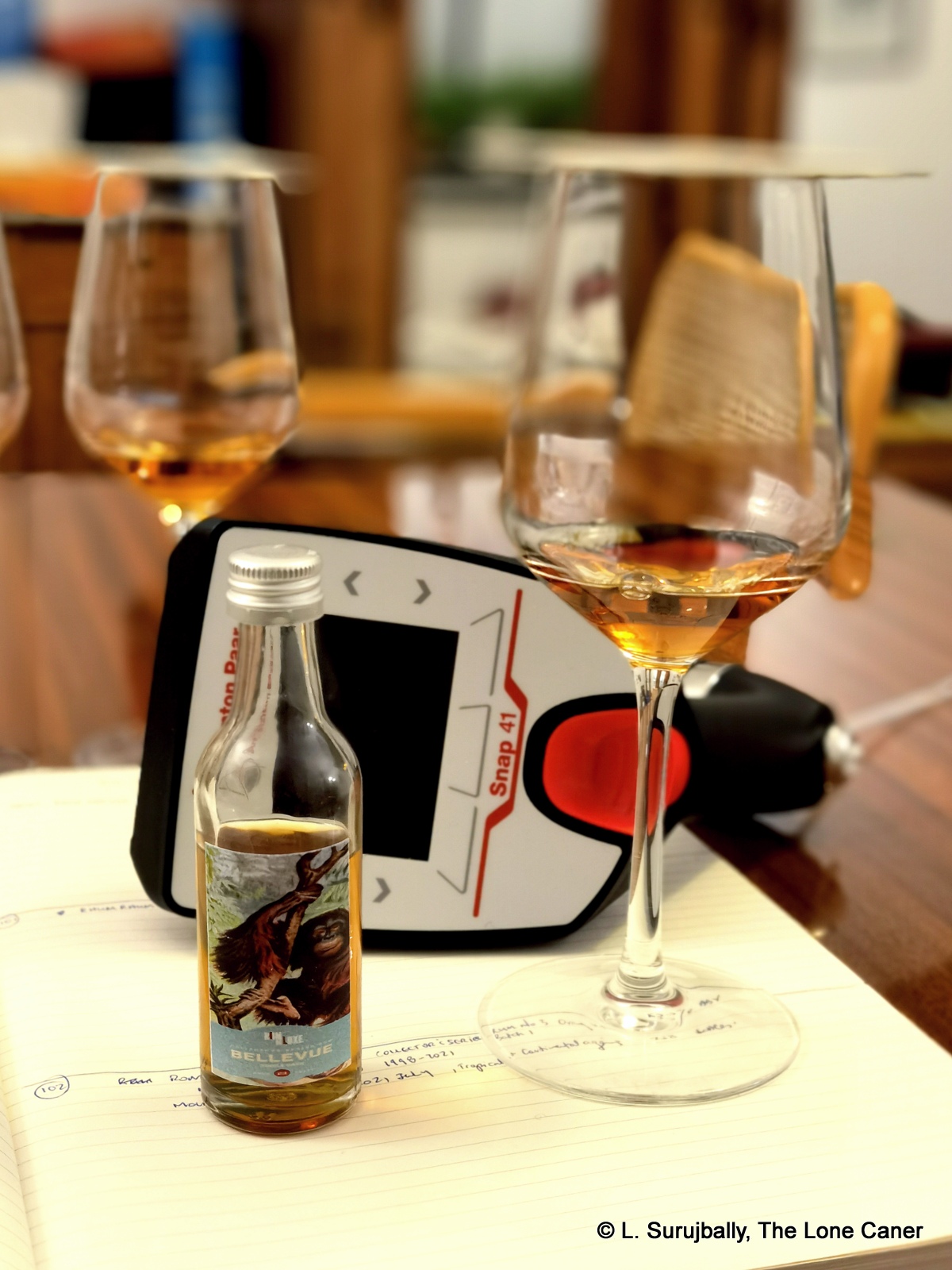 Aside from their premium “Wild Series” line of rums with their striking black and white labels and dizzying proof points, the relatively new Danish indie Rom Deluxe also has various downmarket rum offerings. One step down from “Wild” is the Collector’s Series, originally meant to capture rums that were not quite as strong as the former but retaining much of the quality.  On the face of it and perusing the listings, I don’t honestly see much difference, however, aside perhaps in a lower price. 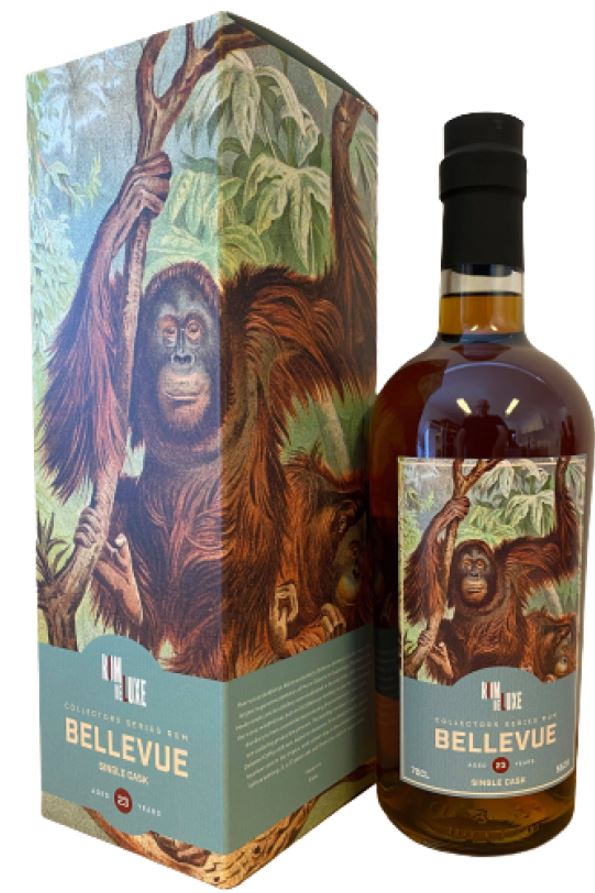 The rum, fortunately, did not disappoint.  The nose was middle-of-the-road complex, a Goldilocks-level symphony of just about enough, never too much and rarely too little. The nose was slightly briny, but not a Sajous level-salt wax explosion. It had fruits, but was not an ester-bomb – peaches, apples, melons, apricots, flambeed bananas.  A little smoke, a little wood, noting overbearing, and all these notes were balanced off with a pleasant melange of breakfast spices, cinnamon, vanilla, caramel and a touch of licorice.

The palate settled down a bit and continued to channel an approach that eschewed the screeching sharp vulgarity of a fishwife’s flensing knife and went with something more moderate. There was salt caramel ice cream in Irish coffee, topped with whipped cream. Vanilla and brine, stewed apples, green peas, light pineapples, peaches in syrup. Things got a little odd somewhere in the middle of all this when distinct notes of wet ashes, rubber and iodine came out.  These however, didn’t stick around long and gave way to a dry, short, crisp finish redolent of strong hot black tea (sweetened with condensed milk), acetones, nail polish, brine and a last filip of toffee.

No matter.  Whatever category it’s placed in, it’s really worth checking out of it ever turns up in your vicinity. I doubt you’d be disappointed. 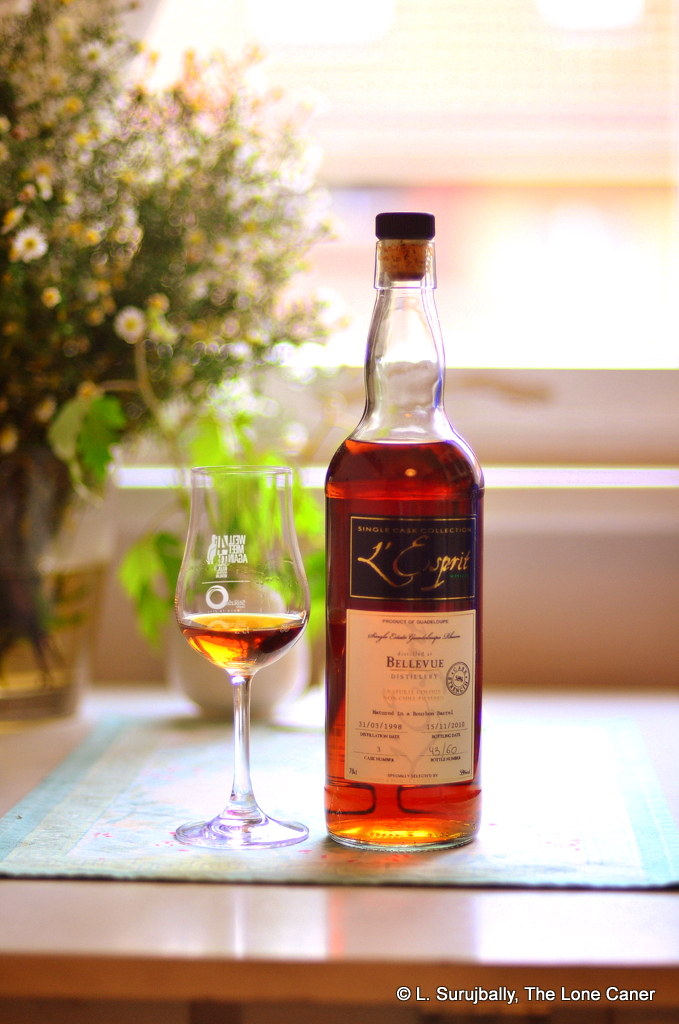 The surprisingly heavy and dark Bellevue rhum made by L’Esprit purred salt and sweet caramel ice cream into my nose as I smelled it, revealing itself in so incremental a fashion, with such an odd (if excellent) profile that it almost had to be experienced to be properly appreciated, and it left me wondering whether this was a molasses rum, not one from cane juice.  It was bottled at the perfect strength for what it displayed, melding power and smoothness and warmth in a nose of uncommon quality.  Yet there was lightness and joyousness here too, a sort of playful melange of all the things we like in a rhum, skimping not at all on the secondary notes of prunes, plums, peaches, and pineapples.  It was plump, oily and aromatic to a fault, and demonstrated quite forcefully that the Epris Brazilian rum that had been my first introduction to the company had not been a one-off, one hit wonder.

Even to taste it, the experience did not falter or withdraw from its exuberance. The Bellevue seemed to operate on two levels of quality simultaneously – first there were the faint oily, rubbery notes, leavened with nougat, pink grapefruit and light citrus.  And behind that, almost at the same time, there was the real deal: honey, vanillas, olives and briny notes in perfect balance, chopped light fruits and flowers, plus a thin thread of licorice coiling through the whole thing.  There was just so much going on here that it rewarded a rather languorous approach to the tasting – usually I do all my tastings at the table with all the comparators within easy reach, but here, after ten minutes, I simply said “to hell with it” and went out onto the balcony, sat down to watch the sun go down, and idly observed the passers by below who didn’t share my good fortune at having a lovely rum like this one growling softly in my glass.  Even the finish kept on developing (not always the case with rhums or rums) – it was crisp and smooth and hot, long lasting, a real delight – it seemed to be a little more oaky than before, here, but the lasting memories it left behind were of a lot of hot, strong black tea, and burnt sugar resting easily on a bed of softer vanilla, tobacco and citrus notes.  It was, and remains, a solid, smooth, tasty, drinking experience, not quite as good as the Damoiseau 1989 20 year old…but close, damned close. 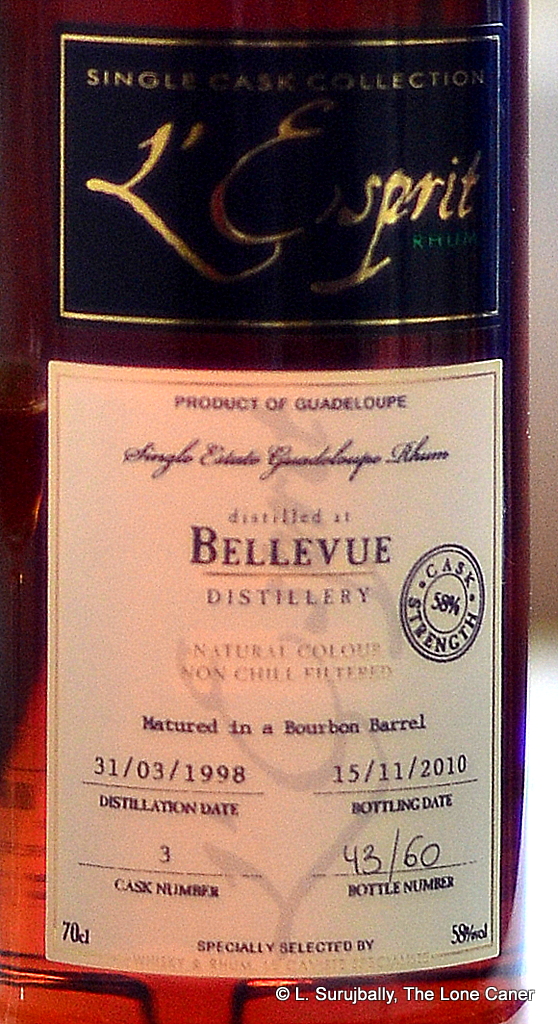 If you’re one of the fortunate owners of this nectar, let me run down the bare bones so that you know what you’re drinking: column still product, cask strength 58%, matured in a bourbon barrel for slightly more than twelve years.  This is not from the Habitation Bellevue distillery on Marie Galante, but from the Bellevue estate which is part of Damoiseau on Guadeloupe (the main island), founded in 1914 and bought by Louis Damoiseau in 1942 – commercial bottling began around 1953.  Like just about all commercial spirits operations in the West Indies, they ship bulk rum to Europe, which is, as far as I know, where this one was bought, so ageing was not tropical, but European.  Which, fortunately for us, didn’t diminish its achievement in the slightest.

My association with L’Esprit, that little French company from Brittany I wrote about earlier this week, came as a consequence of that Brazilian rum referred to above — that thing really impressed me.  And so I kept a weather eye out, and bought the first bottle made by L’Esprit that I saw, which just so happened to be this one…I have a few others from the company to go through so it won’t be the last either.  While thus far L’Esprit hasn’t made a whole lot of rums – twenty five or so the last time I looked – the worth of their wares is consistently high.  This one is no exception, an enormously satisfying rhum with exclamation points of quality from start to finish.

The minimal outturn should come in for mention: I’m used to seeing a “set” of a few hundred bottles from the various indies, a few thousand from Rum Nation, so there’s a fair chance some reader of this little blog will pick one up…but to see one of merely sixty bottles from a single cask, well, I may just be spitting into the wind (it was beaten, for the trivia nuts among you, by the Old Man Spirits Uitvlugt, a measly twenty eight bottles, and by the reigning world champion, the Caputo 1973 which had just one). The reason why the outturn is so relatively small, is because L’Esprit is bowing to the market – they know it’s mostly connoisseurs who love cask strength rums, but they’re few and far between, and it’s the general public who drive sales and buy the 46% versions.  What Tristan does, therefore, is issue a small batch of cask strength rums from the barrel (60-100 bottles) and the remainder gets tamped down to 46% and issued in 200-300 bottles.

After going head to head with as many agricole rhums as I can lay paws on for the last few years, there’s nothing but good I can say about the tribe as a whole.  I enjoy the fierce purity of the AOC Martinique rhums, their almost austere clarity and grassy cleanliness – yet somehow I find myself gravitating towards Guadeloupe a bit more often, perhaps because they have a slightly more experimental, almost playful way of producing their hooch (they never bothered with the AOC certification themselves, which may be part of it).  This gives the rhums from the island(s) a certain unstudied richness and depth that seems to have created a bridge between traditional molasses rums and agricoles (my personal opinion).  If you can accept that, then this Bellevue rhum demonstrates – in its fruity, oily, creamy, complex, balanced and warm way –  the potential and quality of the best of both those worlds.

A last pic: Yeah, it’s out of focus and photobombed by The Little Caner…but we could all use some cheer and smiles once in a while, and I liked this one a lot anyway. 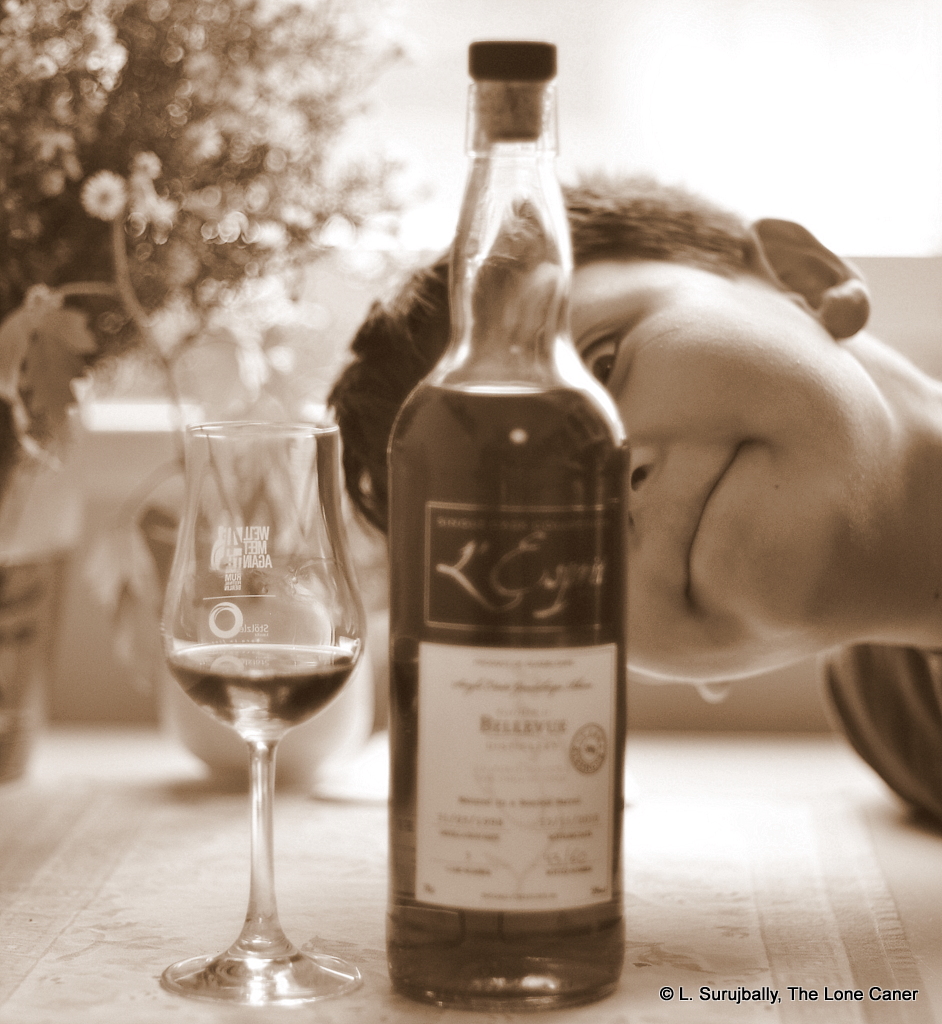