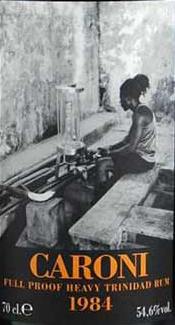 If we assume Luca found four thousand barrels at that legendary Caroni warehouse, and the average outturn from each was 250 bottles, a simplistic calculation suggests somewhere in the neighborhood of one million bottles of the Trini juice from Velier alone is waiting to be bought, and that doesn’t even count the other independents out there who are releasing their own.  Figuring out which Velier Caroni to buy is complicated by the bewildering array of aged expressions that have been released, some differing only by the proof point (years and age being the same) – but the general thesis I’m coming around to is that you can pretty much buy any of them and be assured of a really good rum.  This one from 1984 is no exception. Not sure how many barrels this came from, but 580 bottles emerged…so maybe two?

Colour – Amber (these things are all amber, more or less)

Nose – Wow, this is nice – deep caramel, petrol and tar aromas meld well with an undercurrent of burnt brown sugar, cream cheese, Danish cookies and licorice.  There’s some bitter chocolate in the background, and after some minutes a thin blade of citrus emerges and lends a really nice counterpoint to the heavier, muskier smells.

Palate – If it didn’t have tar and petrol it wouldn’t be a Caroni, right?  There’s bags of the stuff here, a Carnival jump-up of them, but so much more too – that dark unsweetened chocolate, green grapes, coffee grounds.  Some ash and minerals, and fruits kept way back, and also honey and nougat and an olive or two.  It’s actually somewhat salty, and the sharper oak bite is a bit dominant after ten minutes or so.

Finish – Dry, briny, tarry, sharp, with some caramel and raisins and prunes to give it depth.  Still too much oak and the chocolate disappears, leaving only the slight bitter aftertaste, like the Cheshire cat’s grin.

Thoughts – Great strength for what was on show. 1984 was a good year (and that was a memorable anno for me personally since I fell in love and got dumped for the first time then, so the period kinda sticks in my mind) and this rum is an excellent line into the past…a Trini in the best sense of the term, and a Caroni lover’s delight.