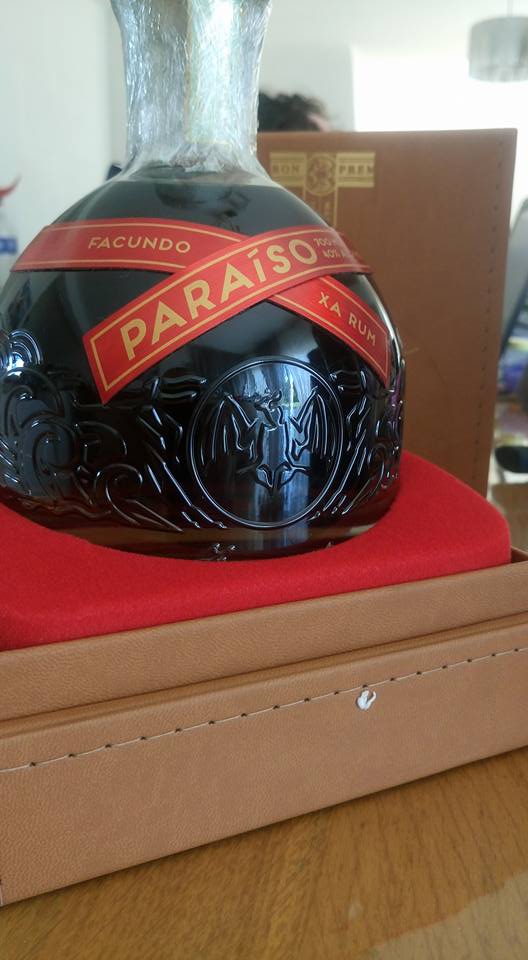 The Facundo rum series from Bacardi which was launched in 2013, is an attempt by the company to insert itself into the premium market with a series of aged blended rums.  Strictly speaking, it’s not a true Rumaniac vintage (the idea is to write about old stuff that isn’t actually in production any longer), but every now and then a more current expression slips through the cracks without having gone through the process of being recalled only by the elderly, filtered through their fond recollections of where they had been when they first tried it.  You know how it is – when you can’t get the vile crap you had in your younger years any longer, it grows in the memory, somehow getting better each time.

The Paraiso is the top end of the four expressions released under the brand (Neo, Eximo and Exquisito are the others) containing various rums aged up to 23 years, finished in old cognac barrels and is priced to match, though one wonders how much of that is the bottle and enclosure rather than the rum itself.  And of course there’s all the old marketing blather about jealously guarded, never-before-seen, private stocks and family casks meant only for visiting royalty, not the ignoble peasantry.

Nose – Briny, soft and mildly fruity, with almonds and vanilla. Some toblerone and a whiff of tobacco. Herbal, grassy notes, and oak, and exactly two grapes. Sweet and light and too damned faint.  Not sure what’s stopping them from boosting it to maybe 45%.

Palate – It may be a blend of old rums, but I think it hews too closely to the formula represented in its downmarket mega-selling cousins.  The thing is too light and too weak in both mouthfeel and taste – there’s no assertiveness here. Caramel (weak). Pears and another two grapes (weak). Alcohol (weak). Vanilla (some). Almonds, oak, breakfast spices (almost nonexistent).  Sugar (too much – I read it has 15-20 g/L when doing my research after the tasting, so now I know why).  Plus, all these flavours blend into each other so it’s just a smooth butter-caramel-vanilla ice cream melange at best.  Did I mention I thought it was too sweet?

Thoughts – Unless you’re a fan of light, easy sipping rums from Cuba (or in that style), and are prepared to drop north of £200, I’d suggest passing on it.  It’s not, as the website suggests, “possibly the finest rum ever sipped,” not even close. Still, the presentation is excellent, and for its strength it has a few pleasant notes — but pleasant is not what we want in something bugled to be this old and this expensive: we want a challenge, a blast from the past, something majestic.  This isn’t it, and frankly, it just annoys me. There’s more and better out there at a lesser price from the same island.