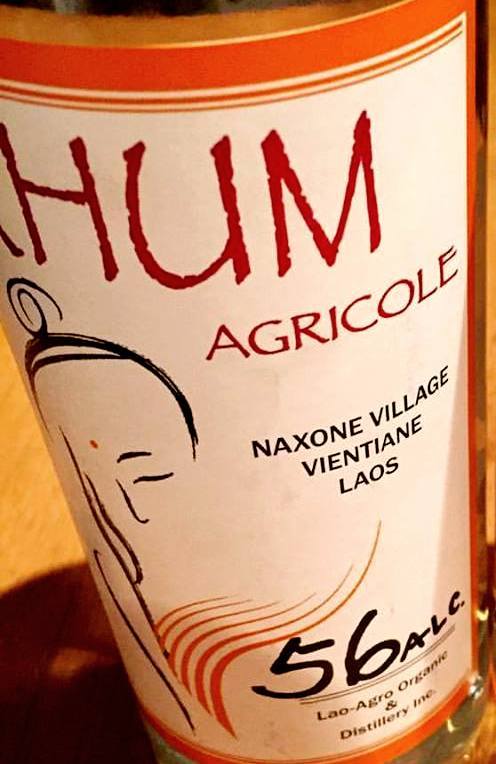 A white rhum from Laos, which comes out punching at 56%

The rums we see and drink share a certain geographic commonality. On the shelves are rums from the various Caribbean islands, those old British, Spanish and French (and Dutch, and yes, Danish) colonial possessions. Next to them are South and Central Americans tipples which are the inheritors of the Spanish traditions brought over centuries ago…no shortage of their products either. Then there are those from micro-ops from Canada and the USA, few of which make any sort of big splash but which gain an audience from the communications infrastructure of those developed nations. And of course there are independent bottlers in Europe who take 90% or more of their stock from the Caribbean and further south. We hear about these all the time. But it’s possible that the future undiscovered variations of the rum world lie not west of Greenwich, or close by…but east.

Bar the odd exception like the Fijians, Old Monk, Bundaberg and Nine Leaves (or CDI’s Indonesians), how often do we hear about other rums from Australia, from India, from Africa, from the Far East? I’m not saying they make ninety-point masterpieces of rum which would make a pilgrimmage necessary, but if we consider ourselves Evangelists of the Cane, perhaps some attention should be paid to the outliers as much as the more familiar and popular mastodons of our world.

The problem lies in getting one’s paws on any.  The rum makers of the east (or south) usually lack good distribution networks or agents to bring their products to the western markets, which is why Capo Verde off Senegal makes grog like the clairins but nobody ever heard of them, or why Ogasawara and Ryomi are relatively unknown outside Japan.  In other situations, the domestic market is large enough to swallow all the output, so again, unless you’re there it’s not likely you’ll hear much about, for example, Ord River, Substation No. 41 or Beenleigh’s 5 year old, all of which are made in Oz.  Old Monk and Amrut are ginormous sellers in India but not always that easy to find one in your local hoochery, and then there are the Asian nations which make ersatz rum their own way, like Tanduay, Chalong Bay, Mekhong…or this Laotian one, which we’ll poke our snoots into today.

Information on the rhum is as maddeningly hard to find as the product itself. What little I’ve been able to cobble together from mon ami L’homme à la Pousette (the source of the sample, big thanks to the man) and some diligent googling, is that it derives from Vientiane, Laos, and is an organically made agricole bottled at a hefty 56%.  The company that makes it — Lao-Agro Organic and Distillery Inc — has a brand called Laodi which is primarily liqueurs, and they also produce a lower proofed white variation of this rhum, and a slightly aged one.  I gather that it is mostly for local consumption, not export (which may be why few of us ever heard of it before).  But in terms of the production methods, source of cane, filtration etc, there’s not much to go on, sorry.  We have to take it on its merits alone. 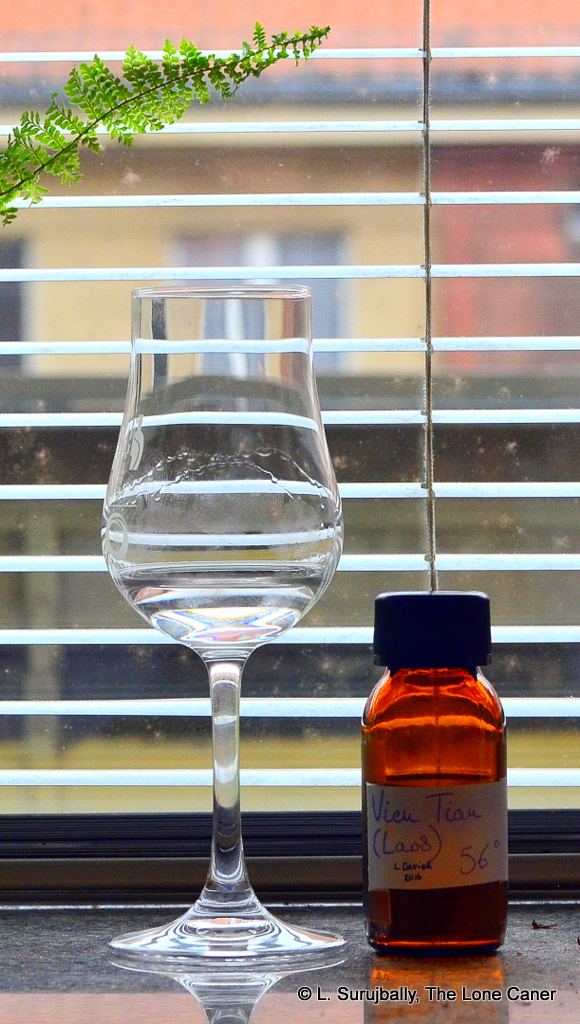 All that aside, this was quite some rhum – it reminded me of the clairins, the Rum Nation Pot Still Jamaican, the DDL High Wine (sadly discontinued), oomphed-up French Island unaged blancs, or, for that matter, even some of  those new whites Velier put out last year.  The raw pot still style was right there up front when one sniffed it – salty, vinegary notes, crisp cool cucumbers, rubber and acetone and nail polish and freshly varnished furniture.  Yeah, it was sharp, and quite stabbing, and there was an odd developing odour of commingled fish sauce, citrus juice, and coconut water nosing around the back end…fortunately, that was controlled and not excessive, and the whole aroma was underlain by that herbal swank and sugar water that so characterizes agricoles.  In that sense it was both similar to and different from, “regular” agricoles with which most of us are more familiar.

Palate wise, the agricole origin was much more evident.  Tons of sweet sugar water and juicy pears, white guavas, grass, lemon juice and also — somewhat to its detriment, because these did not enhance the balance or integrate properly — some wax, brine and red olives.  To the end, it remained harsh and sharp, quite raw, nowhere near as cultured as, say, the Nine Leaves Clear or even the Appleton (Wray) overproof, which was stronger.  Still, say what you will – it was unique, with an enormously long, hot finish, redolent of wax paper and olive oil, more brine, more herbals and grass, and yes, more swank.

On balance this is a cocktail maker’s dream, I think, and would make a mix that would blow your hair off, but as a sipper it fails, which is no real surprise — much as I like agricoles, white rums and unaged rhums for their sheer machismo and balls-to-the-wall aggro, this one isn’t up in my wheelhouse. That’s because the way the flavours intermingle isn’t quite right, and the sandpaper rawness of the experience is off-putting.  However, I have to concede that I’m somewhat partial to rhums that swing wildly for the boundary, go for a six instead of a safe one, and miss with grandeur, rather than never bothering to come up to the batting crease at all. Is this Laotian rhum a success?  No, not really (or not yet) – but it’s never somnolent, never moribund…never boring.  It runs smack into the wall at full speed, and fails with authority, know what I mean? And that, to me, is something that matters.