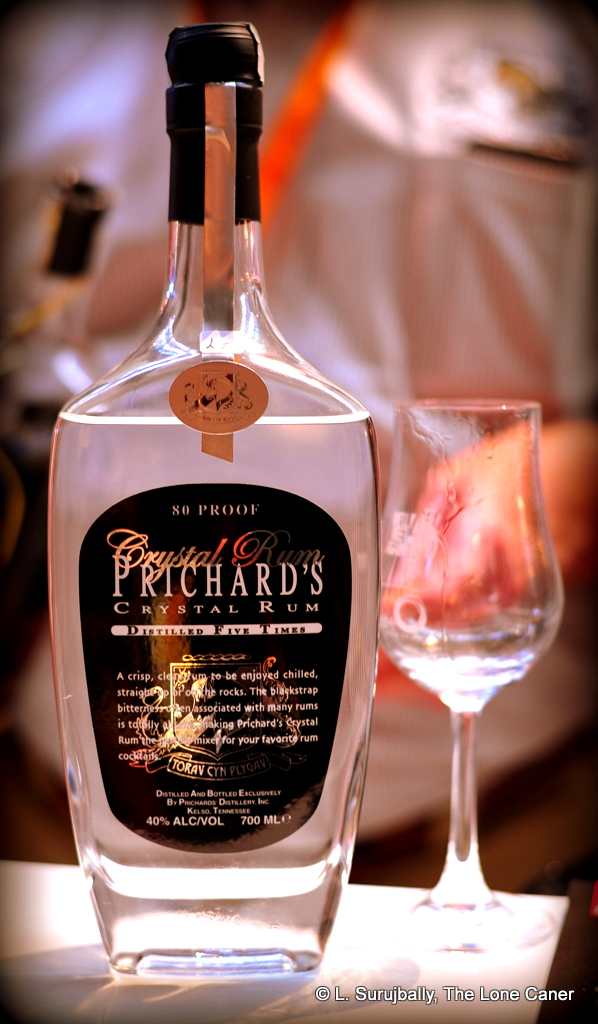 Neither attempt — to make an ersatz agricole (from molasses) or a white mixing agent to take on the more established brands — really works.

Prichard’s is that outfit from Tennessee which has been quietly and busily putting out rums for nearly twenty years, ever since Phil Prichard decided to make rum in whiskey country.  And while it is now common for new entrants to the market to sell white unaged rum from their stills to cover startup costs and provide cash flow while they wait for more favoured stocks to mature, Mr. Prichard didn’t do anything of the sort, and so his white rum – called Crystal – came later to his company’s portfolio (the first review I’ve seen is dated around 2007).

White rums (or “clear” or “silver”, or “blanc”, pick your moniker) come in several varieties, to my mind: agricoles (of which clairins are a subset), cachacas and filtered white mixers, with a new field of unaged pot still whites beginning to gather a head of steam. The question to me was which target the Crystal was taking aim at, and if it succeeded at any. The evocatively named rum is apparently distilled five times using the same sweet Louisiana molasses as the Fine Rum, which is a major selling and marketing point for the company; it is unaged and comes straight from the barrel (though I’m curious – if it was utterly unaged, what was it doing in a barrel in the first place?).

Anyway, one thing I remarked on right away after pouring it out, was a certain clear crispness to the nose.  No real complexity here: green apples and vanilla for the most part, and remarkably sweet to smell: the origin molasses were detectable in spite of the filtration. The vanilla was really quite overpowering, though, even if  some cream and saltiness emerged at the back end…overall, nothing too difficult to tease out.

Even at 40% it kinda grated on the palate: it was sharp, too raw – that was the lack of ageing making itself felt.  It wasn’t precisely light either, and the initial clarity of the nose dissipated early, to become a slightly heavier, oilier drink.  When it opened up, other, less appealing tastes stepped up to show themselves off – still a lot of sugar and vanillas, yes, but also harsher iodine and metallic notes, with some crackers and brie teasing the senses without ever taking centre stage. And it was oddly dry as things wrapped up, with those vanillas and fresh-cut green apples returning to take a last look around before disappearing in a short finish. 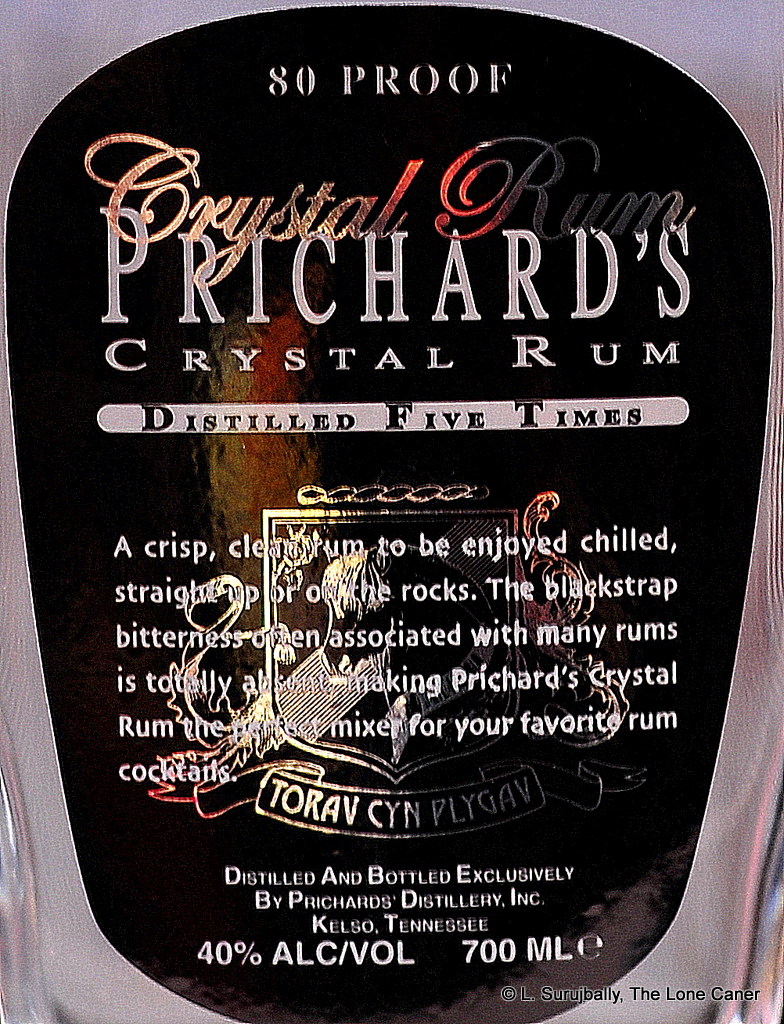 I review all spirits as if they were meant to be had neat – right or wrong, that’s my cross to bear in an attempt to use the exact same methodology to evaluate every rum I try.  To have different techniques in evaluating different rums based on any idea of what a rum should be used for (sipping drink, cocktail ingredient) is to introduce a bias, if not outright confusion.

So by the standard of whether it works as a neat rum, then, the Crystal doesn’t succeed (and even Prichard’s website doesn’t imply otherwise and plugs it as a mixer).  The very slight acidity of the fruit I tasted, mixed up with the lingering molasses, the vanilla, the jarring metallic notes, creates a discordant taste profile which destroys the sipping experience.  As a cocktail ingredient, then? Probably much better.  Not with a coke though – something sharper is needed to take the vanillas off, so I’d suggest ginger beer, lime, Angostura bitters, something in that direction. Prichard’s own website gives some examples.

Since I’m not into tiki or cocktail culture, such white, bland, filtered rums don’t do much for me, and that’s why in over five years I’ve reviewed almost none (I’ve gotten hammered on them quite often, mind you).  This one’s okay, I guess: it’s just a sweet-molasses-based silver, lacking sufficient complexity or blending artistry to make it as a solo drink. My low score should not be seen as a blanket indictment, then, since its failure as a neat sample does not invalidate it as a cocktail ingredient where it may shine more. I’ll leave it to experts in that field to argue the case for the Crystal, which unfortunately I myself could not and cannot make.