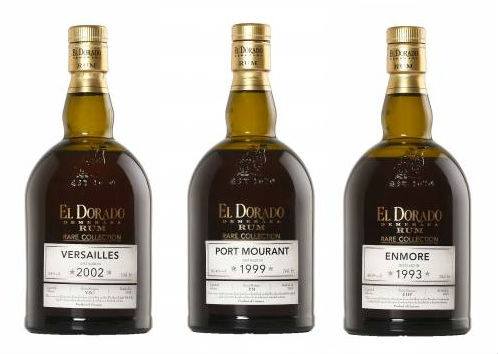 “I hope for them that the rums are good,” muttered Cyril darkly, as a bunch of us exchanged comments on the newest DDL offerings.  We should have been happy, but we weren’t, not really.  Few of us rum watchers were.

Back in December 2015, I read the tea leaves spectacularly wrong and suggested that DDL would not be issuing single-still Velier-style full proofs any time soon.  A month later they did: an Enmore 1993, Versailles 2002 and PM 1999.  I’m actually kinda surprised nobody ragged my tail about my utter inability to forecast what might even have been a foregone conclusion after the age of Velier’s Demeraras abruptly ended. So yeah, I munching a big crow sandwich right now.

Still: if you’re not deep into rums, perhaps the way the blogosphere erupted at the news of DDL’s full-proof “Rare Collection” might have taken you aback. A link to an article on Velier’s site went viral almost immediately on the FB pages of la Confrere, Global Rum Club, Ministry of Rum; even some blogs made mention of it. People who loved Velier’s Demeraras, and who snapped up indie bottlings of Guyanese rums for ages, were happy as a Caner who fell into the vat, that DDL had finally started to “tek front.”

But as time went on, it became clear that there were several issues with the three bottlings named above, and all of them pointed to what I maintain are deficiencies in DDL’s strategic (or marketing) arm.  They misread the public sentiment and displayed no real current knowledge of what drives purchases of upscale “super-premium” rums.  They came at the wrong time, at the wrong price, with too little information and with the wrong fanfare.

There was absolutely no forewarning at all (see footnote 1).  The picture and a brief notation in Italian went up on the Velier website (it has now disappeared) and that was it. And not even in time to make the Christmas season, where traditionally liquor sales peak.  As of this writing (January 20th) they are still not represented on El Dorado’s own website (although the deceased Mr. Robinson remains as a valued member of the team). DDL’s Facebook page has nothing, and questions I raised in private messages to them went unanswered.  Wow. Who on earth is in charge of getting the message out over there?

Along with the lack of warning, there was no mention of three key points that anyone selling a rum about which there is great anticipation should reasonably consider:

So essentially, until the Danes at Romhatten got their hands on a set and started writing about them (the PM received a 96 rating), few people knew where they could be had.  Most online stores still don’t carry them. It was later established they would not be sold in North America. And when it was understood that they averaged out at €290 a bottle in Denmark and Germany, whereas most independent bottlings of the same ages cost between a €100-200 on the primary market, the grumbles got louder.

Leaving out production costs and taxes, two things drive a bottle’s price way up – age (to some extent, though I have paid an arm and a leg for a seven year old from 1980), and more than that, rarity.  The two together create monsters like the Appleton 50 year old ($4500/bottle) for example.  One of the reasons a Velier Skeldon 1978 pushes prices past the thousand euro mark on the secondary market, is because there are so few out there.

However, DDL has not marketed the rums with indie-bottler-level pricing to titillate the market and grab initial market share and establish their own reputation for great full proof rums, separate from that of Velier; they gave no hint of how many bottles were issued; they advertised not at all, and to add insult to injury, are staying mum on the fora where they can engage their fans and the general public. All of this suggests that we are being asked to pay very high prices for an unproven product of uncertain commonality. If a hundred bottles had been issued that would be one thing….ten thousand would be quite another matter.

Consider this key point also – Luca was the recipient of a decade of goodwill for his full proof lines, aided and abetted by issuing rums that were very very good.  The man had an enviable track record, made almost no dogs, and had no dishonour or disrepute attached to his product (like DDL got when hydrometer tests began to show the inclusion of unreported sugar to their standard aged rums), and as a result, people were willing to buy his products blind, almost at any price, knowing they would get something that had a good chance of being an excellent drink and a worthwhile investment. And to his credit, Luca provided all the info up front, and never priced his rums to the point where this kind of essay became necessary.

DDL maybe felt that “if we issue it they will come.”  Given the explosion of interest in the new line, they were certainly correct there, and they themselves have many decades of goodwill of their own to tap into, deriving from the El Dorado line of rums (if not the Single Barrel expressions).  So I’m not saying DDL makes bad rums (quite the opposite in fact).  And believe me, I’m not pissy because I read the future wrong.  In fact, I have already bitten the bullet, put my money where my mouth is, and bought all three of these releases at those crazy prices.  I look forward — keenly — to reviewing them.

What I am is annoyed with the stumbles of a company for which I have great regard, and which should know better. You don’t issue expensive rums after the holiday season, when purses are scrawny and credit card bills are due. The pricing and the lack of information are sure to piss off more serious rum lovers (and writers) who make purchasing decisions carefully.  One spends twenty bucks on a whim…not three hundred. And think about this also: when bloggers to whose opinions people attend say they will not buy these rums because they are too pricey or difficult to get (as several have already told me), their audience gets turned off too, and sales will inevitably diminish. If this happens and DDL believes there’s no market for full proofs, well, then, what do you think they will do? Cancel the entire line, maybe?

So yeah, I’m a little miffed with DDL’s new rums, much as I applaud the fact that they’re issued at all.  Only time will tell whether the price they’ve set is justified.  In the meantime, they’d better start providing us consumers with more information, not less.  And those rums had better be damned good.