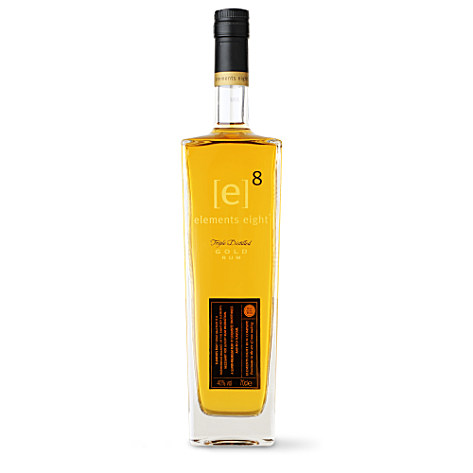 I’d seen this trapezoidal bottle once in a while on the occasional shelf in Calgary, but  I’d never been interested enough, or seen it in sufficient quantity – let alone heard anything about it – to decide whether it was worth a buy or not.  It was an interesting surprise when a very helpful gent from Co-op named Dan Ellis (may the ice in his glass never melt) sourced the thing out.  Now granted, I had been making sneery remarks at the paucity of his rum selection (as opposed to the Scottish drink) so the honour of his stores certainly came into play here.  But I’m happy he bothered.

A Single Digit Rum does not usually inspire me to treat with any degree of reverence and a blend even less so, but in this case, the styling of the bottle and its comparative rarity (and, it must be stated, price – I’m as much of a snob as anyone at times, sorry), made me take more than usual care in checking it out. I was…intrigued.  And in retrospect, I’m glad I took the time.  The nose seemed fairly straightforward on the getgo – a clear, intense light gold rum, very delicate (Oh God, was this another friggin’ Doorly’s? was the first thought through my mind), but with a slight hint of peaches and citrus, and definitely apple – it reminded me of my favourite (and very expensive) Riesling. My wife, who loved that New Age bottle to pieces, rudely snatched the glass from my hands and watching her little button nose try to extract scent from the glass that swallowed it whole was almost as entertaining as her attempts to translate her thinking into English.  We both tasted the oak, but she noted that there was a hint of dried forest leaves dampened by a summer rain too.  And after we stood it for a bit and it opened up, there was the molasses and burnt sugar revealing itself around the skirts of the first aromas like a shy girl hiding behind her mommy. A girl with some spirit because there’s no getting away from the slight medicinal tang to the nose which spoils what is otherwise a really good nose.

On the tongue and in the mouth, the Elements 8 Gold changed its character again: it grew up, took off its braces and flirted without shame, flicking up its skirt and laughing.  Not assured enough to be mature, still young enough to have some rawness to it, but no longer in its girlhood, it bucked in coltish adolecence across my taste buds, coating the palate with soft oiliness.  The thing is, there is no caramel or toffee taste in this thing at all – a first for me.  It’s not sweet and has a deep, rich burn going down, like a well aged cognac.  And the body is excellent, medium heavy, and maintaining that odd …cleanness which I really liked. But the finish is fast — our tomboy hasn’t learned to make a kiss last yet, so while she is fine as peaches and cream, she needs a little polish to make her into a world beater that men will stampede over each other to taste.

Elements 8 is a premium rum made in the St Lucia Distillery, but care has to be taken in distinguishing it from the actual products of that distillery (for example, the Admiral Rodney, or the Chairman’s Reserve brands) – the [e]8 organization works closely with the distillery while not either owning it or being owned by them.  The Elements 8 Rum Company is a UK enterprise run by two gentlemen, one of whom, like me, is a Caribbean infused German (don’t ask).  The founders of Elements 8 saw that rum, like whiskies, vodkas, gins and tequilas, could reach upscale quality and prices by dint of differentiation, innovative distillation and blending, product design, clever marketing and word of mouth.

Elements 8 is an instructive study in how to raise expectations with glowing advertising. Unlike the Kraken, which simply had fanboys going ape over it (unnecessarily so, in my opinion), this one had quality written all over its commercial messaging. Supposedly eight elements of production are married in a holistic manner to produce a rum modestly referred to as being of surpassing quality: environmental (St Lucia boasts a unique micro-climate which imparts its own character to the rum but then, so does every other island), cane from Guyana – I was told it was molasses not the actual sugar cane (one of the ads, which touted the cane  as being “hand selected” had me doubled over in laughter), water from protected rainforest habitats, three differeing yeasts, distillation, tropical ageing, blending and filtration, all in harmony. The rum is distilled in three different stills: a John Dore double retort copper pot still for the heavy, flavourful components, depth and finish; a Vendome Kentucky Bourbon copper pot still which gives the rather unique flavour profile; and a steel columnar still for the lighter components.  Since each still is charged with three different washes (from the three yeasts), we have nine blend components (actually, ten) which are blended and aged for a minimum of six years in oaken barrels that once held Buffalo Trace bourbon.  Not bad.

All right, so I tasted, I researched, I drank, then added an ice cube, and after it all, tried it as a mixer.  My conclusions?

Well, forget the mixing part. You get an interesting ginger taste with coke, but it isn’t really worth it: the [e]8 Gold is dense and viscous enough not to need the enhancement.  The nose, as I said is clean and complex, rewards time and care, and is very attractive except for that last bitchy smackdown of medicine (some care in the distillation or ageing, perhaps an additive or two might mitigate that).  The taste is something else again. I’m not sure rum lovers who like their caramel and sweetness will appreciate the slightly salty tang of a rum that is more like a cognac. If you can get past that, the smoothness of the finish and the overall richness of the blend make this quite a unique drink, one that, like Bundie or the Pyrat’s XO, can be identified blind with no doubts whatsoever.  Just not entirely a rum the way I expect one to be (this may be a limitation of mine, not the rum…get a bottle and make your own determination).

So it’s not quite my thing – maybe I’m not yuppie enough, or just like my sweet rum taste more than something made and designed for the bars of the upper class – but in way I feel a little sad, too.  The nose had real promise, really set you up for something special, and at the end I felt like the geek who got to kiss the head of the cheerleading squad, only to find she couldn’t kiss as well as my expectations had been led to believe she could. I’m left with all excitement and no true satisfaction.

I’m hoping that in the years to come, Elements 8 will find a way to marry the traditions of the older rum distillers with the new wave innovations of this century, to come up with something truly spectacular: the fact that they are attempting to produce a premium white rum speaks at a fair amount of determination to think out of the box.  I’ll  not hesitate to buy anything from their line I see going forward.

Note: I’m indebted to one of the founders of [e]8, Andreas Redlefsen, who was kind enough to answer all my questions on his organization, its history, outlook and methods.