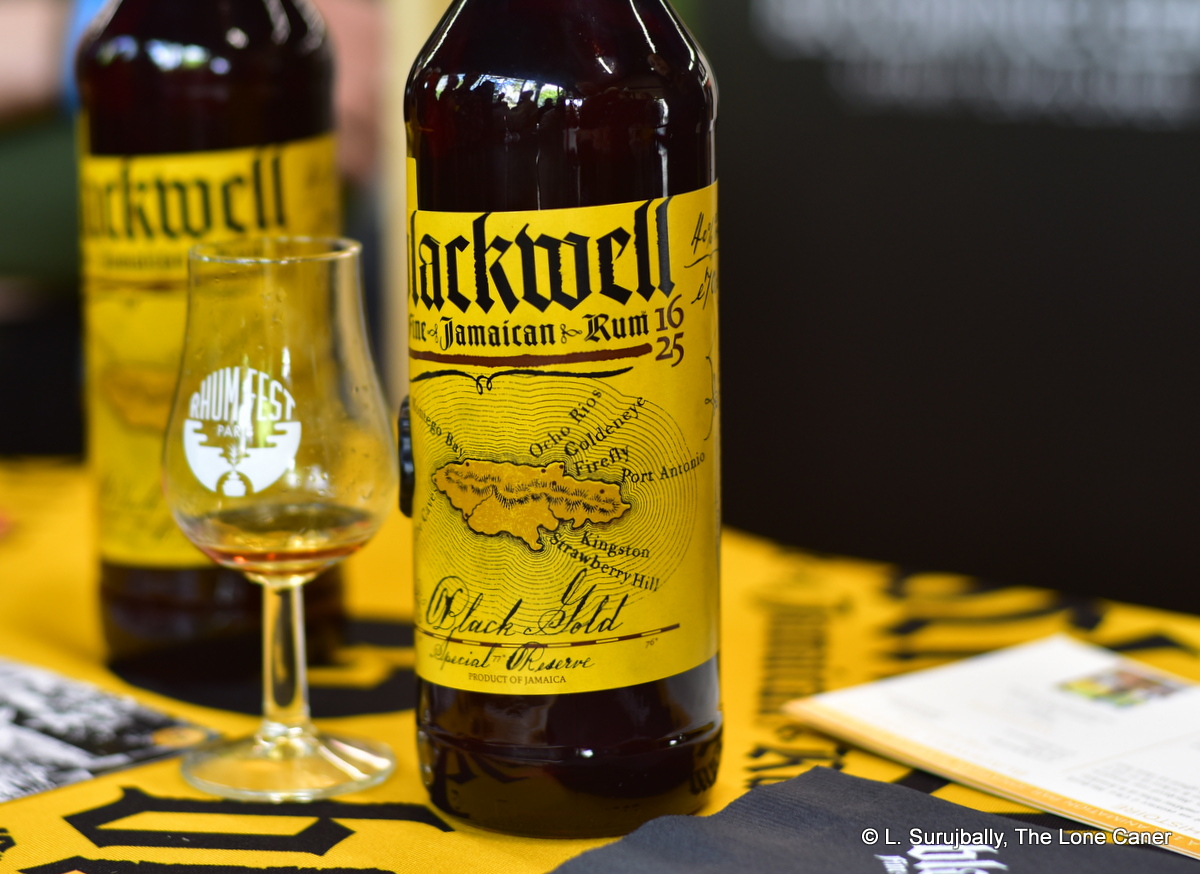 The Blackwell Fine Jamaican rum is the result of another one of those stories we hear these days, about somebody with good intentions, oodles of spare cash, and some street cred in another creative field of endeavour (music, movies, TV, writing, master of the universe, Wall Street, take your pick), deciding they can make [insert product name here] just because (a) they always liked it (b) they have eaten / drunk / smoked / worn / read / watched / experienced it for many years and (c) they want to immortalize their own preference for said product.  “How difficult can it be?” you can almost hear them asking themselves, with a sort of endearing innocence. When that kind of thing is done well and with focus, we get Renegade. When done with less, we get this. 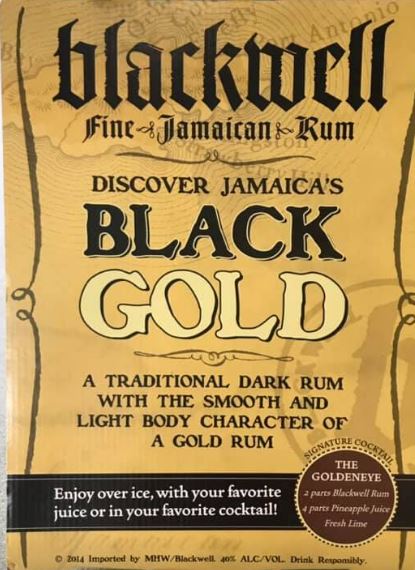 With all due respect to the makers who expended effort and sweat to bring this to market, I gotta be honest and say the Blackwell Fine Jamaican Rum doesn’t impress. Part of that is the promo materials, which remark that it is “A traditional dark rum with the smooth and light body character of a gold rum.” Wait, what?  Even Peter Holland usually the most easy going and sanguine of men, was forced to ask in his FB post “What does that even mean?” I imagine him nobly restraining the urge to add an expletive or two in there, because colour has been so long dismissed as an indicator of a rum’s type or an arbiter of its quality.

Still, here’s the schtick: it’s a 40% ABV throwback to yesteryear’s mild rums, a blend of pot and column still rums from that little hoochery J. Wray, and no age statement: it has indeed been aged (in ex bourbon barrels), but I’ve heard 2-4 years ageing, one guy at the 2019 Paris fest  told me “around five” and in a review from back in 2014, The Fat Rum Pirate noted it was “only aged for 1 year”. We’re going to have to say we don’t know, here. Though I question whether it’s important at all, since everything about it suggests it is not meant as a sipping rum, more a cocktail ingredient, and some rough edges and youthful notes are tolerated characteristics in such a product.

An inviting dark red-amber colour, the first sharp and hot notes out the glass are caramel, molasses, light vanilla, not much like the younger Appletons, any of them. There’s a wisp of seaspray whisking a single olive into your face, some raisins, black cake and cinnamon – but funk, rotting bananas, spoiling fruit?  Nah, dem ting gaan AWOL, don’ go lookin’. To be honest, as something that trumpets the fact that it’s a Jamaican rum, it seems to be in no hurry to actually smell like one.

The palate is equally indeterminate, and its unique characteristics may be youthful sharpness and jagged edges, to say nothing of its overall rough feel on the tongue. Even at 40% that’s no fun, but once it relaxes (which happens quickly) it becomes easier – at the cost of losing what tastes it initially displayed into a vague melded mist of nothing-in particular. These were fruits, dark ones, black cake, molasses, cinnamon, lemon peel, fading fast into a rough and hurried finish that was sweet, with some licorice, bananas, lemon peel and a couple of  raisins. Frankly, I thought it something of a yawn through, but admittedly I say this from the perspective of a guy who has tasted growly old bastards bottled north of 60% from the New Jamaicans. Anyway, it reminds me less of a Jamaican rum than one like Cruzan or Gosling’s, one of those blended every-bar-has-one dark mixing rums I cut my teeth on decades back. 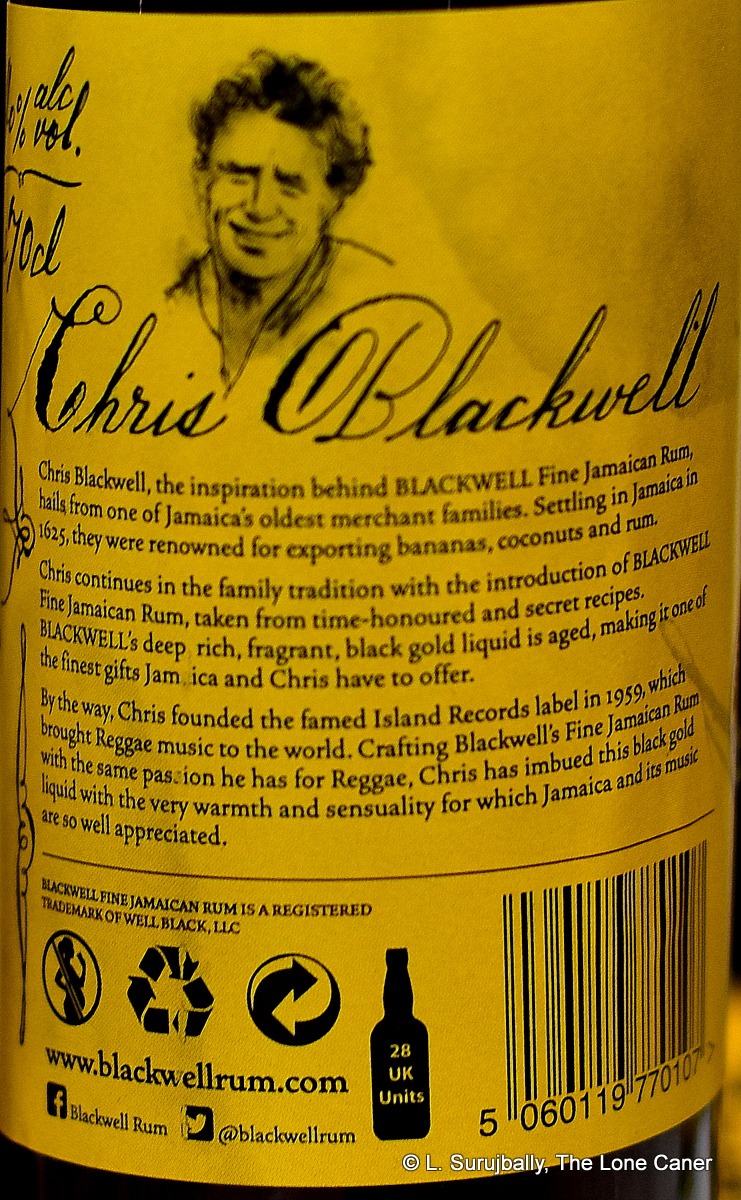 With respect to the good stuff from around the island — and these days, there’s so much of it sloshing about —  this one is feels like an afterthought, a personal pet project rather than a serious commercial endeavour, and I’m at something of a loss to say who it’s for.  Fans of the quiet, light rums of twenty years ago? Tiki lovers? Barflies? Bartenders? Beginners now getting into the pantheon? Maybe it’s just for the maker — after all, it’s been around since 2012, yet how many of you can actually say you’ve heard of it, let alone tried a shot?

The real question is, I suppose, what other rum-drinking people think of it. I may be going too far out on a limb here, but my personal opinion is that Not much is the most likely answer of the kindhearted, and Nothing at all is the response of the rest. Me, I’m with those guys.