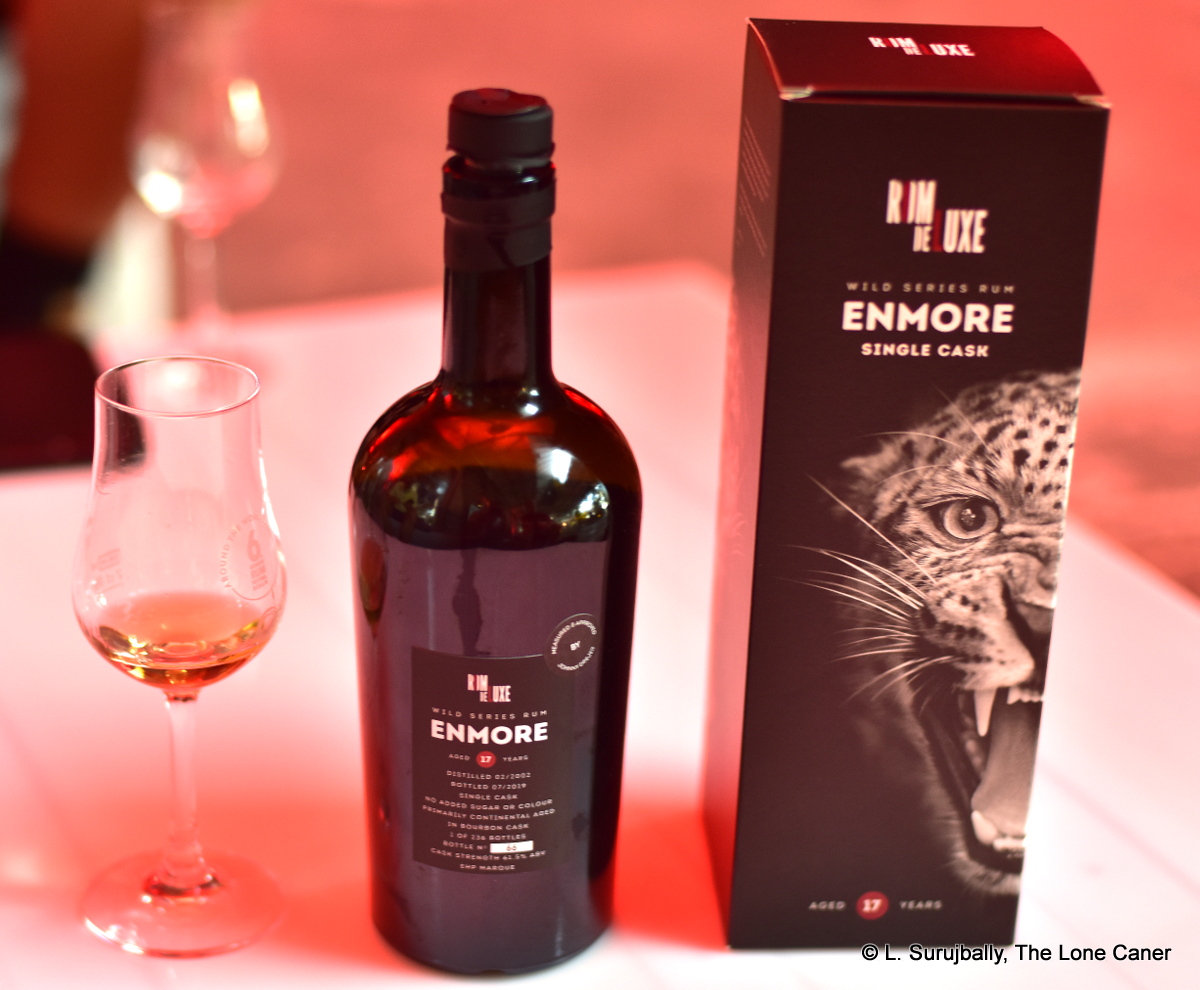 On the first day and at the opening hour of the 2019 Berlin Rumfest, a motley collection of scruffy rum folks met at the back of the hall. Alex Sandu (the young Oxford-based Romanian barman who’s now making a name for himself on the Rum Barrel site) was talking with me about what it takes to manage and maintain a rum site. Indy and Jazz Singh of Rumcask and Skylark Spirits drifted by and sat down, and we all sighed rapturously with the memory of a rum session we had had at Lebensstern rum bar the evening before. Nicolai Wachmann, anonymous rum ninja from Denmark, having left us earlier to go look for junk food outside, rejoined us while still furiously chomping at the semi-masticated remains of his fifth burger, and we all amused ourselves shouting cheerful and childish insults at Gregers Nielsen, who was running the 1423 stand a few feet away. This is the way we soberly conscientious rum chums keep the flag of Rumdom flying high. People must know we take our duties seriously. 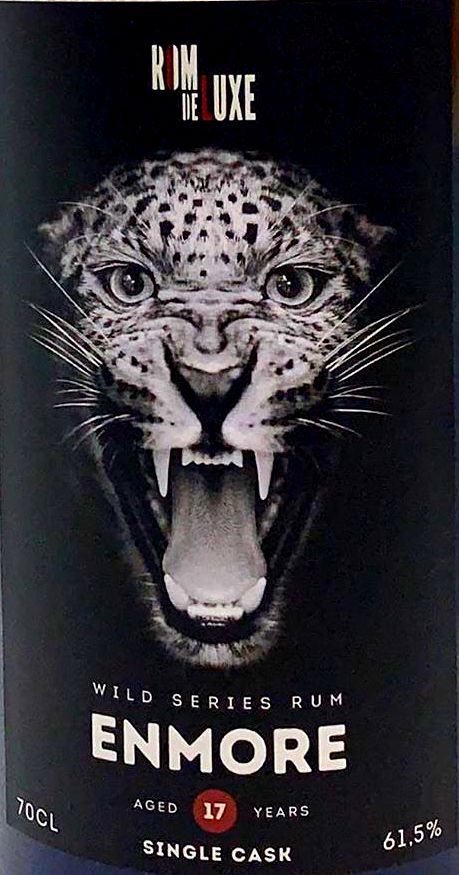 Things calmed down when Johnny Drejer approached, though, because in his fist he carried a bottle a lot of us hadn’t seen yet – the second in Romdeluxe’s “Wild Series” of rums, the Guyanese Enmore, with a black and white photo of a Jaguar glaring fiercely out. This was a 61.5% rum, 17 years old (2002 vintage, I believe), from one of the wooden stills (guess which?) — it had not formally gone on sale yet, and he had been presented with it for his 65th birthday a few days before (yeah, he looks awesome for his age). Since we already knew of the elephantine proportions of the Wild Tiger Release 1, we all immediately tried to elbow each other out of the way in our hurry to thrust our glasses at him, and demanded our rightful shares. And to his credit, Johnny, gentleman to the last, shared generously without hesitation or charge before hastily retreating to more civilized areas of the ‘Fest where rabid aficionados would not assault his immaculate person or pinch his birthday prize, and might remember he was actually only 50.

Now, 61.5% might seem like a lot, and indeed — if you’re not ready for it — it will try its best to take your face off. But nosing it with no more than the usual care suggests that it really is quite civilized…creamy, even. Certainly one can inhale rich aromas of pencil shavings, butterscotch, sawdust and licorice, all standard for Enmore distillate. I can’t say I sensed much in the way of florals or citrus except as a brief background hint; most of the secondary wave consists of black bread, dark fruits, brie, cereals, almonds, anise and crushed walnuts. Maybe a whiff of mocha if you strain.

All this is fairly common, even boilerplate. It’s on the palate that it rises to the occasion and shows some more chops. Now the label notes it was primarily continentally aged so some tropical ageing can be inferred; it’s just shy of hot on the tongue, extremely robust, and very tasty indeed…yet also not rough or sharp. You can taste unsweetened chocolate, anise, blancmange, salted caramel and coffee grounds to start with, and as it relaxes and opens up and you get used to its bold profile, musky, dark fruits like raisins, prunes, not very sweet but with a lot of body. I like the damp sawdust and licorice, the way I always do in an Enmore-still rum, and the long, fragrant finish was pleasant to a fault. Johnny, who had measured the strength of the rum and was mentioned on the label, had gotten himself a pretty nice dram.

Romdeluxe in Denmark is – or started out as – more a commercial rum club that makes private label bottlings and runs promotions, than a true independent bottler — but since they have issued several releases, I’ll call them an indie and move right on from there. Their “Wild Series” of rums has evinced a lot of attention, not just because of its variety but because of the beauty of the stark black and white photography of the large cats with which they adorn their products. 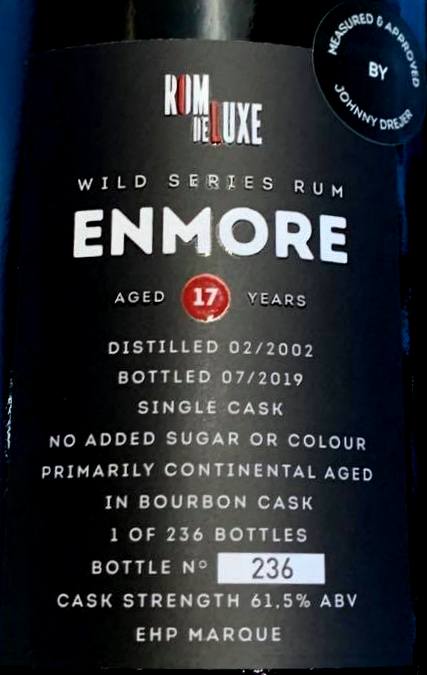 So far there is a tiger (R1 Hampden, Jamaica), jaguar (R2 Enmore, Guyana), puma (R3 Panama), black panther (R4 Belize), lion (R5, Bellevue, Guadeloupe) and leopard (R6 Caroni, Trinidad). I don’t know whether the photos are commissioned or from a stock library – what I do know is they are very striking, and you won’t be passing these on a shelf any time you see one. The stats on some of these rums are also quite impressive – take, for example, the strength of the Wild Tiger (85.2% ABV), or the age of the Wild Lion (25 years). These guys clearly aren’t messing around and understand you have to stand out from an ever more crowd gathering of indies these days, if you want to make a sale.

Still, perhaps because I’ve had so many of rums from the Enmore still, my impression is that this one doesn’t ascend to the heights. It’s a completely decent rum and at that strength you’re getting flavour and a reasonably complex profile. However, it isn’t really unique, and won’t wow your socks off – originality is not its forte, and it seems, rather, to be a restatement of much that has gone before. So it’s easy to like and appreciate, but conversely, leaves no lasting imprint on the mind. A month from now, like just about everyone who was there that afternoon sampling this thing, you won’t recall many memorable characteristics of the rum itself, or much that made it stand out…except perhaps for the fact that it was nice. Oh yeah, and that boss design. If that’s what makes you buy it, then I guess its work is done. Me, I’m saving for some of the others.