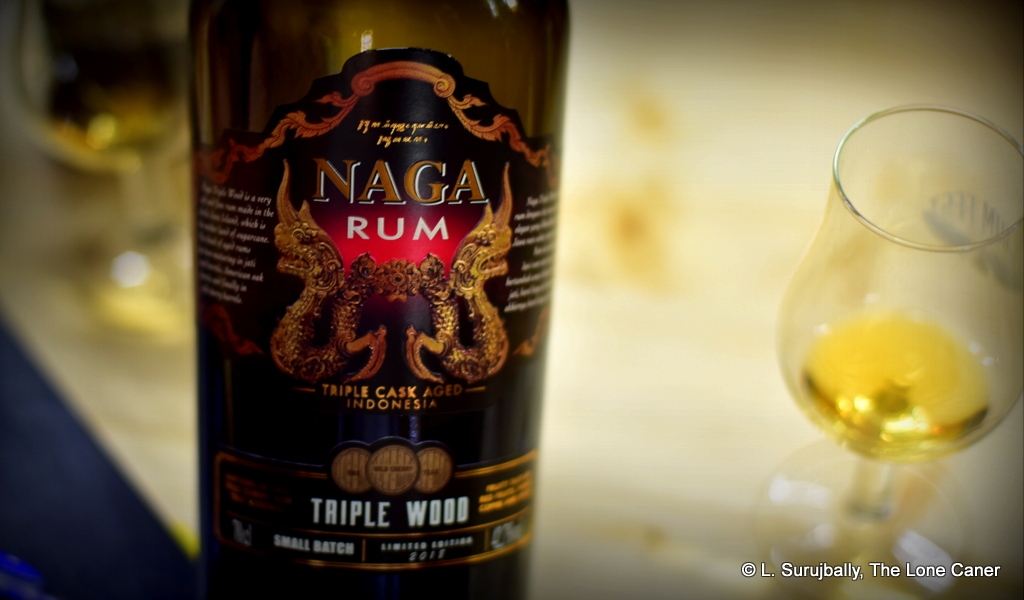 Indonesia is the region where sugar cane originated and gave rise to the proto-rums of yesteryear, which have their genesis in arrack, a distillate first identified by the Dutch and Portuguese in the town of Batavia (now Jakarta, the capital). After being practically unknown to the larger rum drinking public for a long time, arrack and local rums are now slowly being shown to western audiences, most notably from By The Dutch and their Batavia Arrack, and the little company of Naga which produced the rum we’re looking at today.

Based in Indonesia, Naga is a rum company formed around 2016 by Sebastien Follope, another one of those roving, spirits-loving French entrepreneurs who are behind some of the most interesting Asian rums around (Chalong Bay, Issan and Sampan are examples). While small, the company has several rums in its eclectic portfolio, though they lack any distillation facilities of their own – they are buying from a distillery on Java on the outskirts of Jakarta, which cannot be named.

This particular rum is called the Triple Wood for good reason – it is aged in three different kinds of barrels, and is an extension of the “Double Cask Aged” rum we have looked at twice before – once under that name in 2018, and once as the “Java Reserve Double Aged rum” a year later. The triple wood is similarly a molasses-based rum, column-still distilled, aged for three years in barrels made of teak (also called jati), four years in ex-Bourbon and one more year in cherry-wood barrels – it is, therefore, eight years old. Since the company was only formed in 2016 and this rum came on the scene in 2018, it is clear that the first ageing and part of the second was done at the distillery of origin (or a broker, it’s unclear). 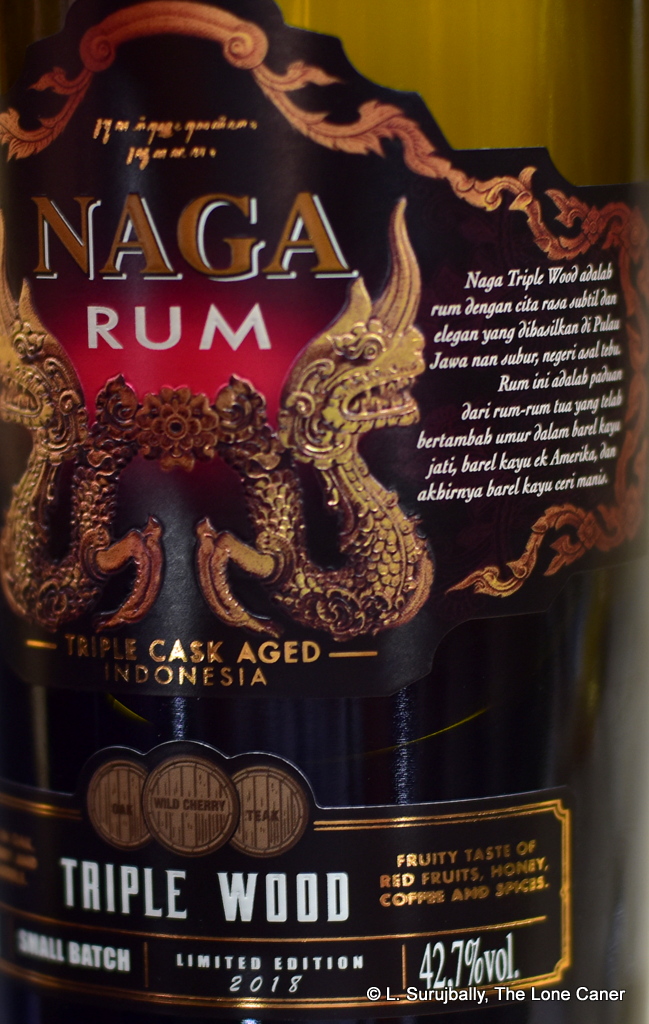 Does this multiple wood ageing result in anything worth drinking? Yes it does – the extra year seems to have had an interesting and salutary effect on the profile – though at 42.7% it remains as easy and soft as its siblings. The nose, for example, is a nice step up: cardboard, musty paper, some dunder of spoiled bananas skins, plus strawberries and soft pineapple or two and brine (which, I swear, made me think of Hawaiian pizza). Caramel and bitter dark chocolate round things off. It’s a relatively easy sniff, inoffensive yet solid.

The palate is goes on to be warm, soft, and somewhat sweeter. Initially, given its puffed cloudy vagueness, you’d think it’s simple and amorphous, but actually it just keeps improving over time – the rum unfolds like a small origami flower, gradually – even shyly – presenting floral tastes, molasses, toffee, nougat, breakfast spices, licorice and some watery background of melons and pears. It’s easy and very relaxing to sip, because the flavours don’t come at you all at once, but kind of stroll past doing a slow ragtime. That low strength, much as I usually prefer something stronger, really is probably right for what that taste is, but it must also be admitted it makes for a weak finish: clean and easy, just not much more than some light flowers, strawberries and bubble gum, fanta, light molasses, and a bit of musty and dust-filled rooms.

I quite liked the rum and enjoyed its low-key, tasty nature, so different from the more aggressive high-proof rums I’ve been seeing of late – after all, one doesn’t always a need a massive overproof squirting dunder, alcohol and pain in all directions. And arrack, this rum’s progenitor, is an interesting variation on what a rum can be (as an example, fermented rice is usually added to the fermenting molasses – see other notes for more details) which is something worth taking note of and these times of dominance by famed Caribbean distilleries. There’s no question that it’s a somewhat different kind of rum, more representative of its region than of any “standard” kind of profile – but for those who are okay trying something different, it won’t disappoint.