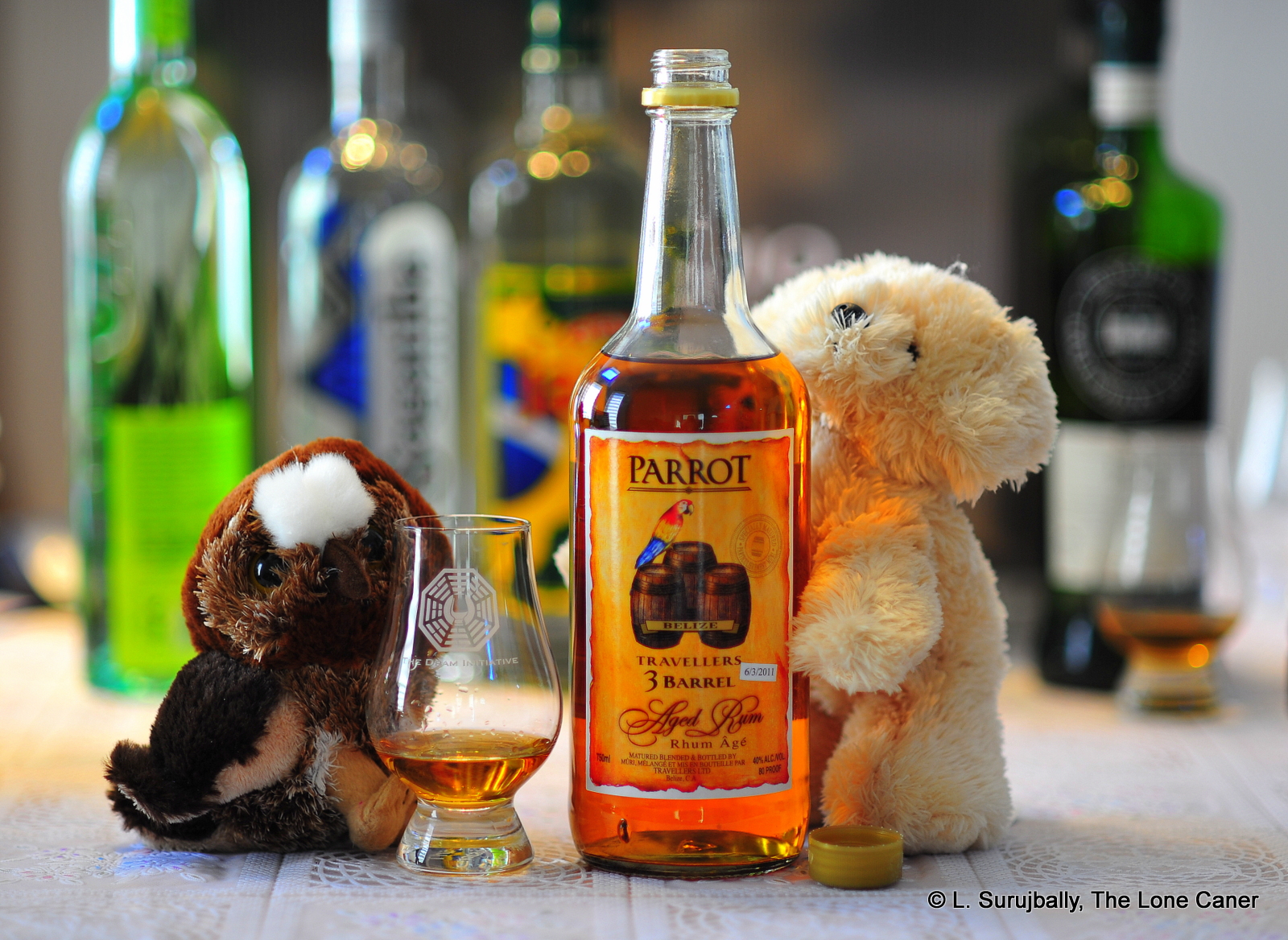 Located in Belmopan (capital of Belize), Travellers is a distillery which traces its origins to 1953 when Master Blender Senor Omario Jaime Pedomo opened a bar he named Traveller’s as a nod to the rum sales made to people travelling to and from Belize City. The company currently uses molasses with natural fermentation (both source of the former and duration of the latter are unknown to me at this time) and double distills the result in a triple column continuous still, for a supposedly smoother, lighter taste. Like many other likker outfits that are big in their own country (DDL comes to mind) they also produces liqueurs, brandies, gins, wines, and vodka, mostly for the local market.

Given that I enjoyed the other rums made by them, it’s odd how long this Belizean hooch escaped my grubby little paws and maybe says something for my purchasing priorities, or where I’ve been buying. It’s the mid-range companion to the quite interesting 1-Barrel and 5-Barrel expressions (the numbers refer to the years of ageing), which may not have scored in the stratosphere, but were tasty, workmanlike rums by any standard. If I had to stratify them, I’d say they were a kind of mix of the softer Bajan and Spanish styles, but that’s just me. 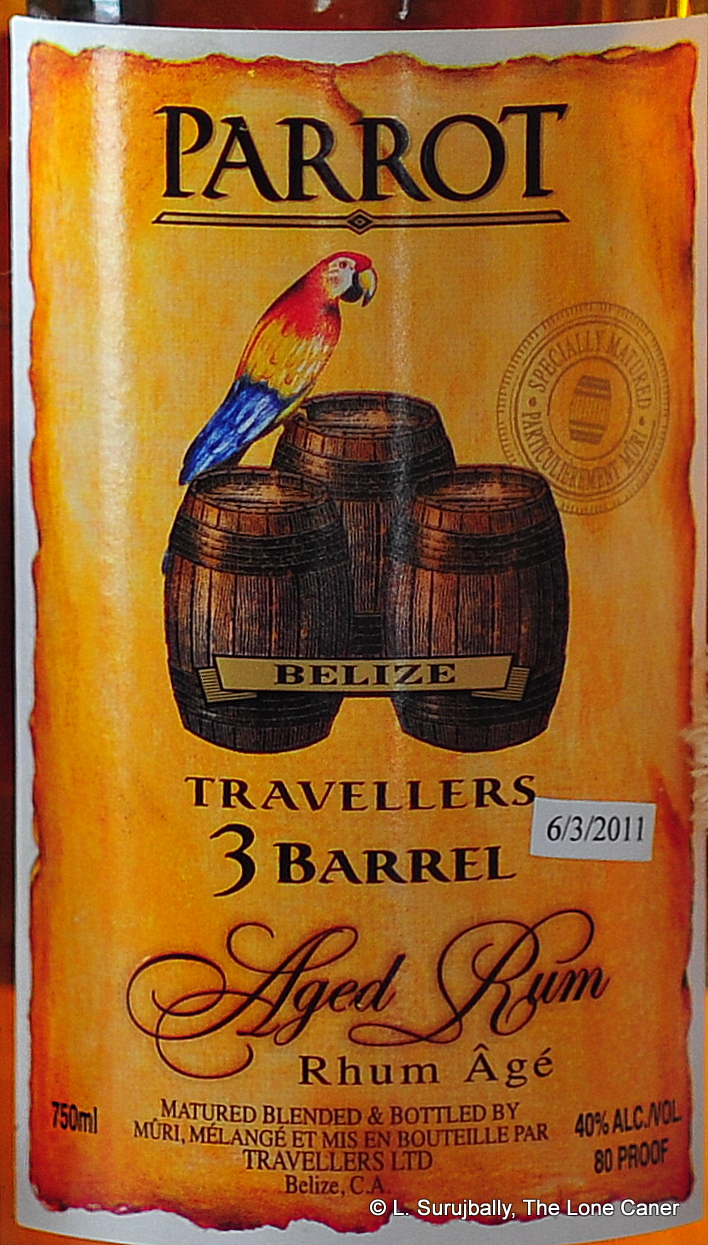 The 3 barrel also evinces a peculiarity of the Traveller’s design philosophy – every one of their three products sports a different label, this one with that “parrot” moniker on it which was absent in the other two, and the five even went with a different bottle shape entirely. It doesn’t really matter, not does it impact my enjoyment, it’s just a curious divergence from the norm of consistency, and I wonder whether it’s deliberate.

Anyway, moving right along: a light orange-gold rum aged three years, distilled at 40% for the North American market (I’ve not seen any Europeans review it, which suggests it’s either attracting zero attention there or simply not available). A quick sharp jab of turpentine and wax flared briefly on the nose, and then was gone, followed by wood, sawdust, salted caramel, Haagen-Dasz toffee ice cream and vanilla. Only barely could some light fruity notes be discerned, maybe cherries, maybe apricots — in either case they were overripe. It was an interesting smell, overall, especially in how it developed, but admittedly somewhat schizophrenic between sweet and salt and fruity.

The rum was medium bodied in the mouth, a little sharp, because the ageing had been brief enough to just take some of the edges off a rawer, more jagged profile, not all. In a peculiar reversal of the way flavours usually develop, it started off with large, dominant flavours of butterscotch, caramel, crushed walnuts and toffee, plus a minor key of cinnamon, apricots and faint citrus, maybe orange peel…and crushed apples bleeding juice before being made into cider. The finish was perhaps the oddest part of my experience with this rum – it was short and the initial smells that I noted did an Alcatraz at the beginning, were back here: wax, paraffin, some turpentine and furniture polish, as well as sweeter, shyer notes of fruits, more caramel, more butterscotch…there really was too much of this.

On balance, the Parrot 3 Barrel showcased rather more potential than actuality. Digging out my initial tasting notes for the 1 and 5 barrel, it’s clear this falls right in the middle, the tastes of the former being tamed a little and being more developed, while not quite at the level of the latter. Something about the overall dominance of the toffee and caramel and vanillas was vaguely off-putting, and didn’t allow the subtler flavours to come through as well as they might have.

So although it’s a well made drink, I think it’s a bit of a yawn-through — still not in the ballpark of either the 5-Barrel or the Don Omario’s 15 year old, and yet lacking the 1-Barrel’s unashamed, almost joyous assertiveness and youth. Like a middle child not knowing which one of the siblings to hang out with, this rum uneasily tries to bridge the divide while balancing precariously in the centre. That it succeeds at all (and it does, more or less) and provides an enjoyable experience, is quite a feat under such circumstances