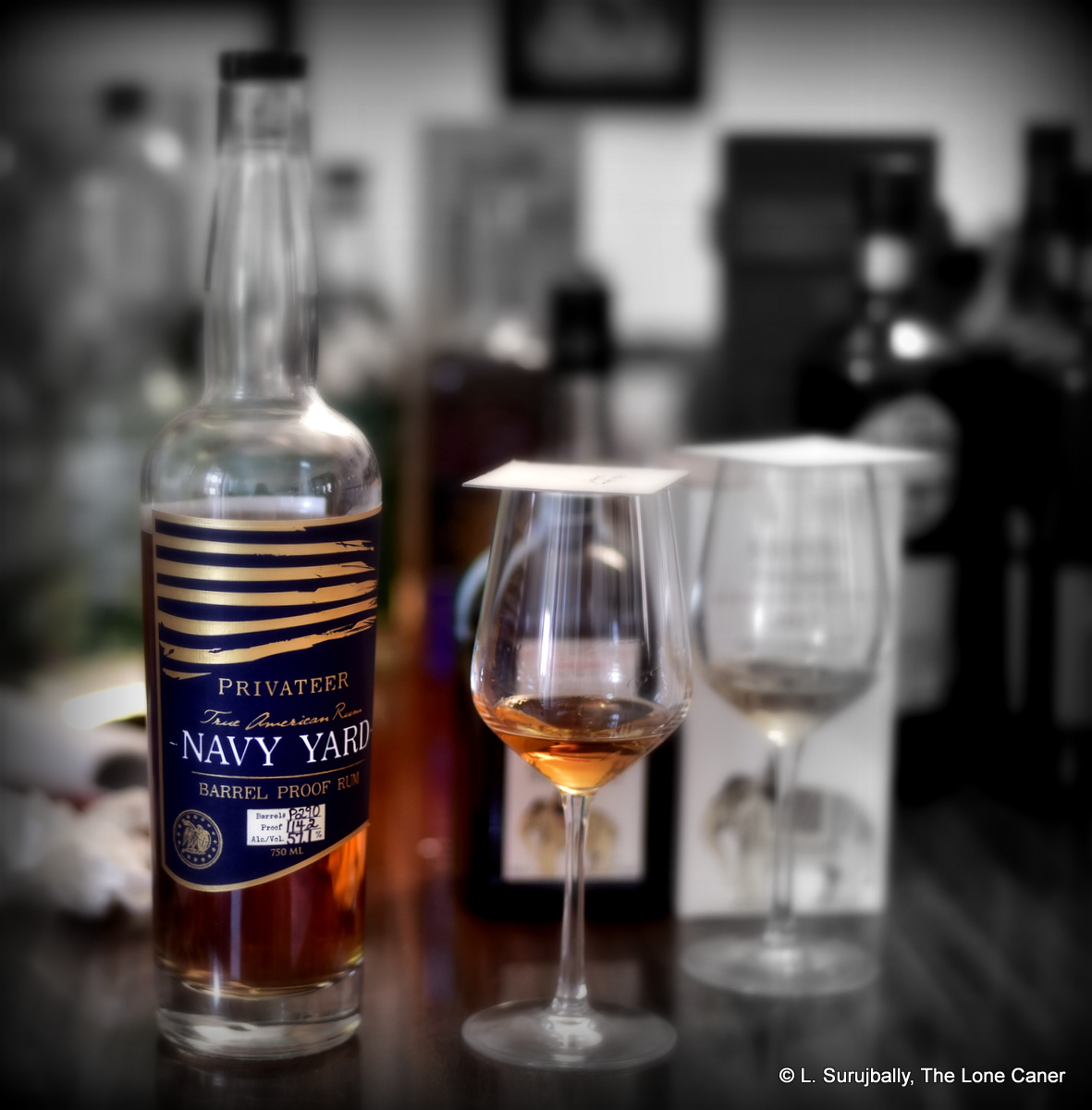 Much of the perception of small and new companies’ rums is tied up in their founders and how they interact with the general public. Perhaps nowhere is this both easier and harder to do than in the United States – easier because of the “plucky little engine that could” mythos of the solo tinkerer, harder because of the sheer geographical scale of the country. Too, it’s one thing to make a new rum, quite another to get a Je m’en fous public of Rhett Butlers to give a damn. And this is why the chatterati and online punditocracy barely know any of the hundreds of small distilleries making rum in the USA (listed with such patience by the Burrs and Will Hoekenga in their websites)…but are often very much aware of the colourful founders of such enterprises.

That said, even within this ocean of relative indifference, a few companies and names stand out. We’ve been hearing more about Montanya Distillery and master blender Karen Hoskin, everyone knows about Bailey Prior and the Real McCoy line, Lost Spirits may have faded from view but has great name recognition, Koloa has been making rum for ages, Pritchard’s and Richland are almost Old Stalwarts these days, the Eastern seaboard has its fair share of up and coming little rinky-dinks…and then there’s Privateer and its driven, enthusiastic, always-engaged master blender, Maggie Campbell, whose sense of humour can be gauged by her Instagram handle, “Half Pint Maggie.” 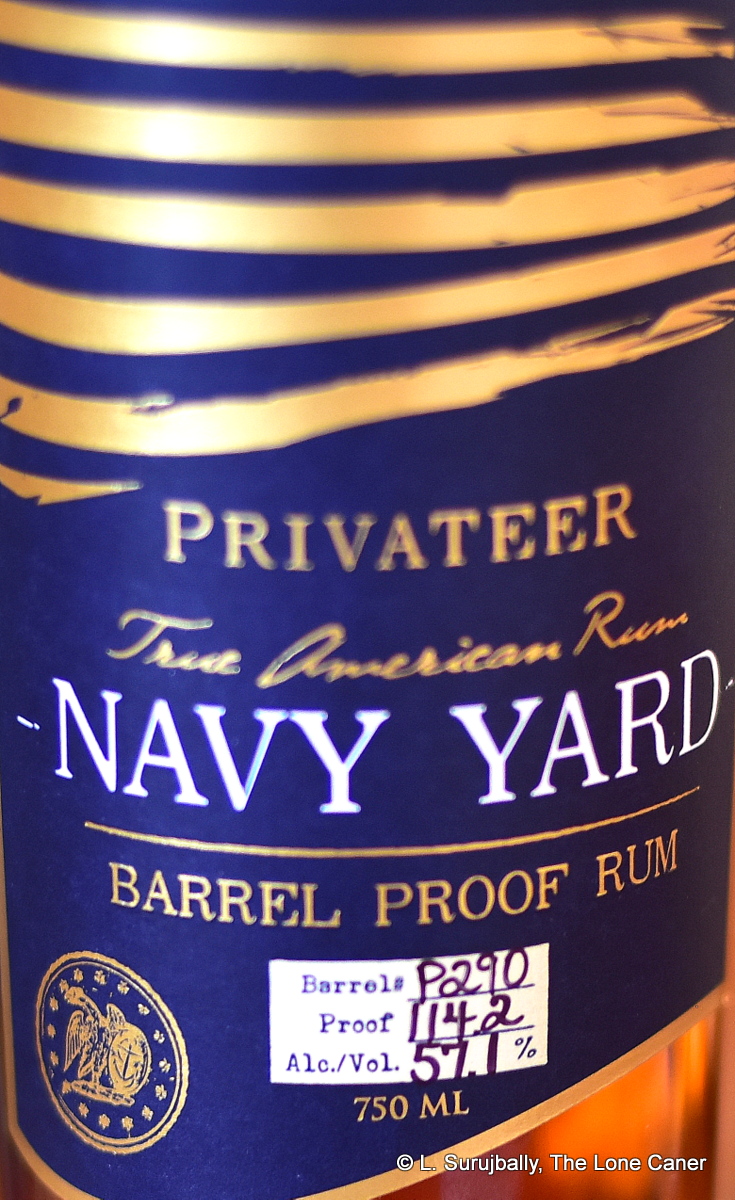 Privateer was formed by Andrew Cabot after he walked away from his tech-CEO day job in 2008 and decided to try his hand at making a really good American rum, something many considered to be a contradiction in terms (some still do). In 2011 he opened a distillery in an industrial park in Ipswich, Massachusetts but dissatisfied with initial results sniffed around for a master distiller who could deliver on his vision, and picked a then-unemployed Ms. Cambell who had distilling experience with whiskey and brandy (and cognac), and she has stayed with the company ever since. The rum is made from grade A molasses, and is twice distilled, once in a pot and once in a columnar still, before being laid to rest in charred american oak barrels for a minimum of two years. The company’s ethos is one of no additives and no messing around, which I’m perfectly happy to take on trust.

So, all that done away with, what’s this Navy Yard rum, which was first introduced back in 2016, actually like?

Well, not bad at all. Each of the three times I tried the rum, the first thing out the door was sawdust and faint pencil shavings, swiftly dissipating to be replaced by vanilla, crushed walnuts and almonds, salted butter, caramel, butterscotch, a touch of the molasses brush, and the faintest tinge of orange peel. What is surprising about this admittedly standard and straightforward – even simplistic – profile is how well it comes together in spite of the lack of clearly evident spices, fruits and high notes that would balance it off better. I mean, it works – on its own level, true, dancing to its own beat, yes, a little off-kilter and nothing over-the-top complex, sure…but it works. It’s a solid, aromatic dram to sniff.

The mouthfeel is quite good, one hardly feels the burn of navy strength 57.1%…at least not initially. When sipped, at first it feels warm and oily, redolent of aromatic tobacco, tart sour cream on a fruit salad (aha! – there they were!) composed of blueberries, raspberries and unripe peaches. Vanilla remains omnipresent and unavoidable, but it does recede somewhat and tries hard not to be obnoxious – a more powerful presence might derail this rum for good. As it develops the spiciness ratchets up without ever going overboard (although it does feel a bit thinner than the nose and the ABV had suggested it would be), and gradually dates and brine and olives and figs make themselves known. The rather dry finish comes gradually and takes its time without providing anything new, summing up the whole experience decently – with salted caramel, vanilla, butter, cereal, anise and a hint of fruits — and for me, it was a diminution of the positive experience of the nose and taste. 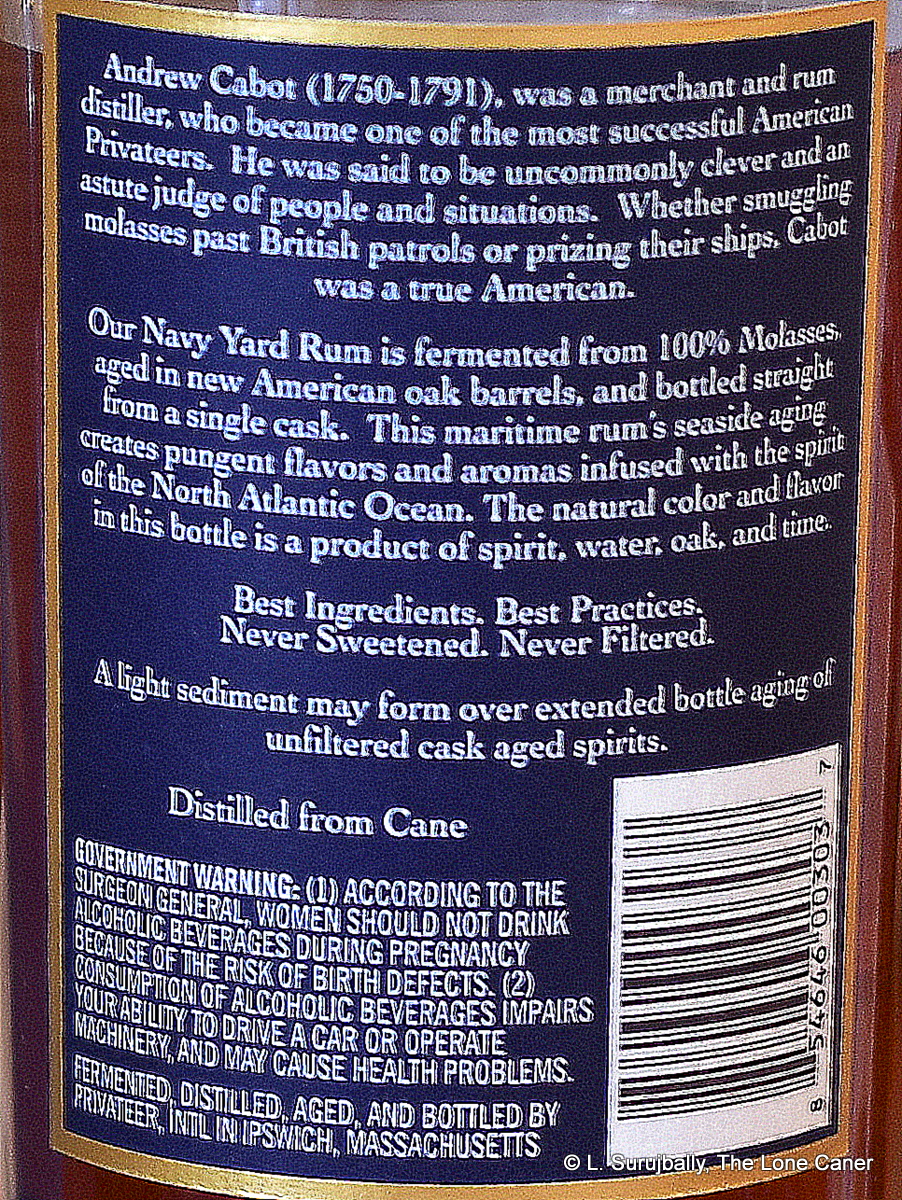 Overall, it’s a good young rum which shows its blended philosophy and charred barrel origins clearly. This is both a strength and a weakness. A strength in that it’s well blended, the edges of pot and column merging seamlessly; it’s tasty and strong, with just a few flavours coming together. What it lacked was the complexity and depth a few more years of ageing might have imparted, and a series of crisper, fruitier notes that might balance it off better; and as I’ve said, the char provided a surfeit of vanilla, which was always too much in the front to appeal to me.

I’ve often remarked about American spirits producers who make rum, that rum seems to be something of a sideline to them, a cheaply-made cash filler to make ends meet while the whiskies that are their true priorities are ageing. That’s not the case here because the company has been resolutely rum-focused from eight o’clock, Day One – but when I tasted it, I was surprised to be reminded of the Balcones rum from Texas, with which it shared quite a lot of textural and aromatic similarities, and to some extent also the blended pot/column Barbadian rums with which Foursquare has had such success (more Doorly’s than ECS, for the curious). That speaks well for the rum and its brothers up and down the line, and it’s clear that there’s nothing half-pint or half-assed about the Navy Yard or Privateer at all. For me, this rum is not at the top of the heap when rated globally, but it is one of the better ones I’ve had from the US specifically. What it achieves is to make me want to try others from the company, pronto, and if that isn’t the sure sign of success by a master distiller, then I don’t know what is.

After I wrote the above, I wondered about the discrepancy in my own perception of the Navy Yard, versus the really positive commentaries I’d read, both on social media and the few reviews others had written (94 points on Distiller, for example, and Drink Insider rated it 92 with nary a negative note anywhere on FB). Now, there is as yet no reviewer or commentator outside the US who has written about the Navy Yard (or others in the line), partly because its distribution remains there; those who did really went ape for the thing, some going so far as to call it the best american rum, so why didn’t I like it more?

The only answer I can come up with that isn’t directly related to my own palate and experience tasting rums from around the world, is that they are not coming to Privateer with the same background as others are, or I do. The sad Sahara of what is euphemistically called “rum choice” in the US, a resultant of the three-tier distribution dysfunction they amusingly call a “system”, promotes a rum selection of cheap quantity, but so denuded of real quality that when the girl next door makes something so much better than the mass-produced crap that masquerades as top-drawer rum over there, it just overloads the circuits of the local tippling class, and the points roll in like chips at a winning table in Vegas.

This is not in any way to take away from the achievement of Maggie Cambpbell and others like her, who work tirelessly every day to raise the low bar of American rumdom. Reading around and paying attention makes it clear that Ms. Campbell is a knowledgeable and educated rum junkie, making rum to her own specs, and releasing juice that’s a step above many other US brands. The next step is to make it even better so that it takes on better known Names from around the world which – for now – rate higher. Given her fierce commitment to the brand and the various iterations they’re putting out the door, I have no doubt there will be much more to come from Privateer and I look forward to the day when the company’s hooch muscles its way to the forefront of the global rum scene, and not just America’s.

I drew on Matt Pietrek’s deep dive for some of the biographical details, as well as articles on Thrillist, Imbibe and various posts about Privateer on FB. Details of the company, Ms. Campbell and the distillation steps can be found both Matt’s work and t8ke’s review, here. This is one of those cases where there’s so much information washing around that a synopsis is all that’s needed here, and if your interest has been piqued, follow the links to go deeper.