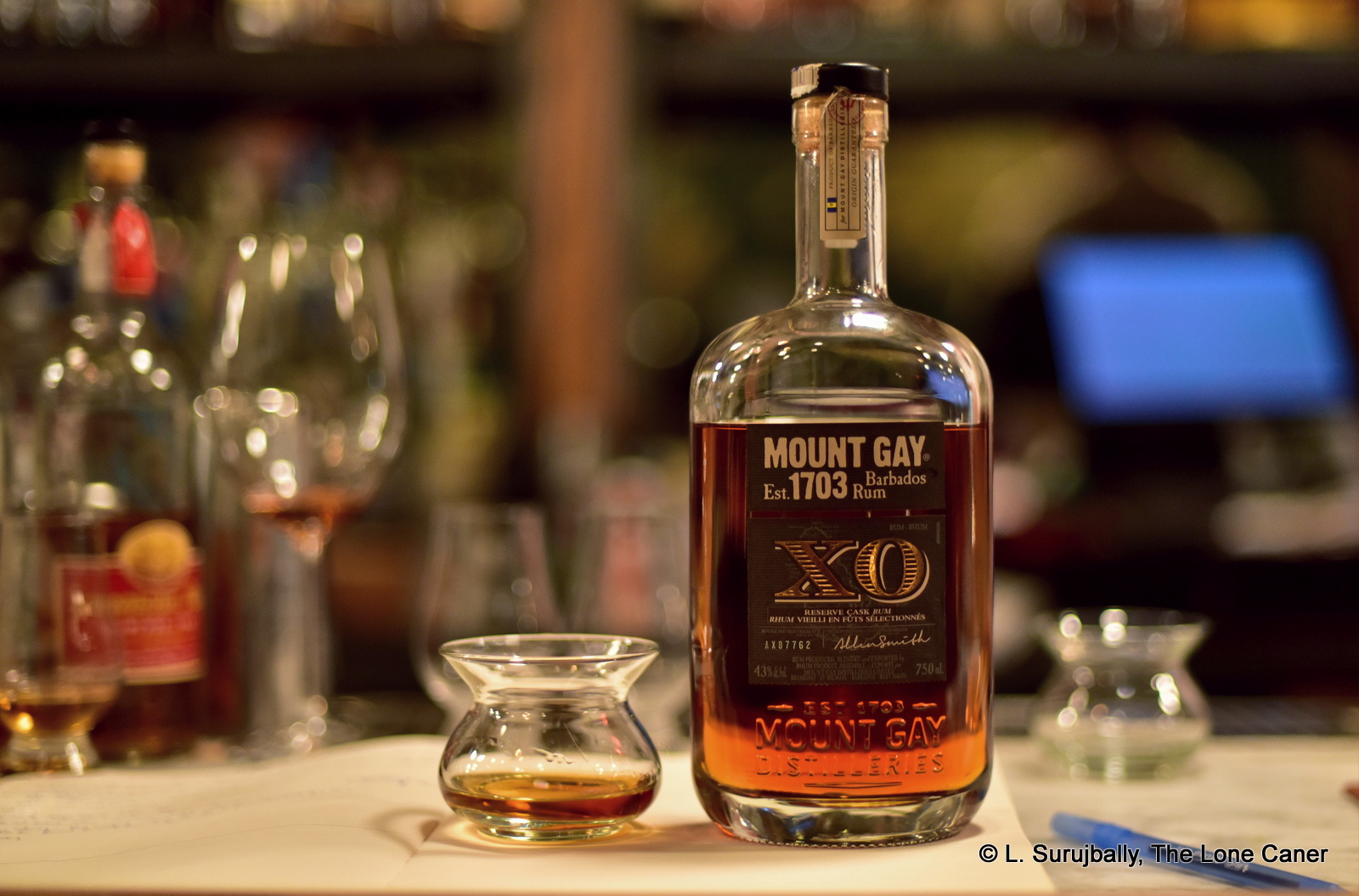 For decades Mount Gay was considered the premium rum of Barbados, and rested its claim to fame, among other things, on being the oldest rum distillery in the Caribbean (there are papers stating its antecedents going back to the mid 1600s). Its flagship 1703 was the halo rum of the island and the XO was perhaps the standard mid-priced high-quality Barbados rum with which everyone was familiar – and certainly Sir Scrotimus’s hating on anyone who didn’t champion that rum didn’t hurt (after all, why else would he be such a dick about it if it wasn’t good, right?). Back when I started writing this was an ongoing situation, and while many extolled the virtues of Doorly’s or Cockspur, Mount Gay was firmly in the driver’s seat as it related to defining the Barbados rum brand.

Now, nearly ten years later, it is Mount Gay which is playing catch up. They, like DDL and many other national-level brands, misread the tea leaves and came late to the party initiated by the nimble, fast-moving independent bottlers – aged, cask strength bottlings, fancy finishes, single barrel or millesime expressions…all this must have caught them so off guard that it wasn’t until 2016 or so that an effective response could be mounted with the XO Cask Strength (a very good rum, by the way).

Be that as it may, even for those coming to the rum scene now with so many other options on the table (Foursquare being the largest and best from the island), one cannot simply ignore the XO. It remains widely available, very affordable, and pretty much the same as it used to be — the 8-15 year old blend has undergone alterations over the years, sure, but the taste remains recognizably the same; the bottle is now the sleek ovoid one introduced some years ago; and in the Caribbean and the Americas it is remains a perennial best seller. Many new writers and emergent rum junkies cut their baby rum teeth on it, even if in Europe most indulgently pass it by in favour of more exciting rums to which they have access. And while its star may be fading in the heat of increased competition, this in no way diminishes what it is – a key rum of Barbados, setting the standard for a long time, almost defining the style for an entire region. All current rums from there to some extent live in its (waning) shadow.

Is it still that good, or, was it ever as amazing as the wet-eyed hot zealots claimed? I didn’t think so back in the day (as I’ve noted, my preferences don’t always run to indeterminate Bajans, really), but as this series grew shape in my mind and the mental list of candidates grew, I knew it was due for a re-taste and a re-evaluation, and Robin Wynne of that fine Toronto bar Miss Things stepped forward to provide a hefty sample a few months ago when I came sniffing around (and as an irrelevant aside, you could do worse than drop into the joint, because it’s a great bar to hang out in and Robin loves to help out with an interesting pour for the rabid). 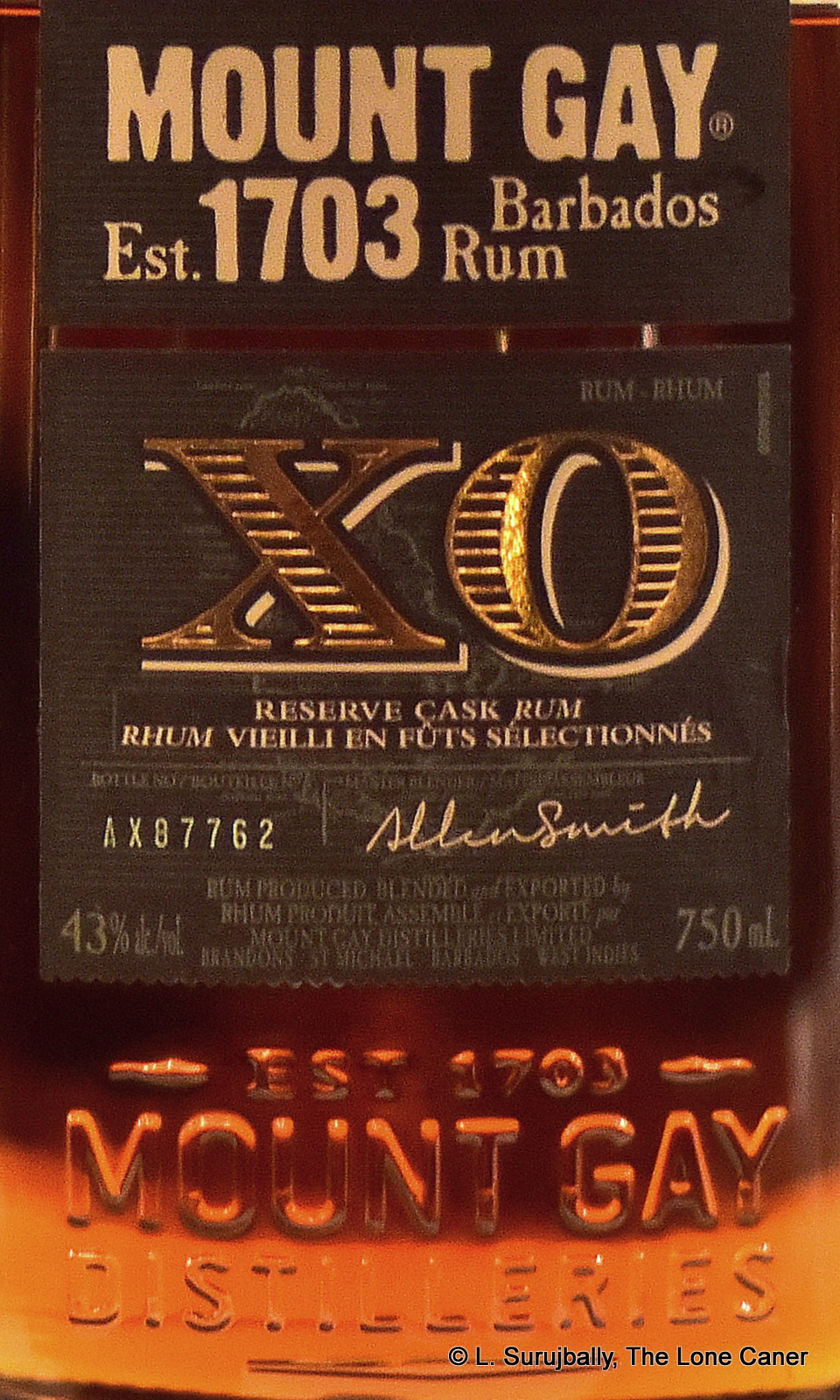 Much of my seven year old mental tasting memory of the 43% rum remained the same: the nose began with a smoky sort of butterscotch and toffee flavour, quite soft and easygoing, underlain with a gentle current of coconut shavings and bananas. Its softness was key to its appeal, I thought, and as it stood there and opened up, some brine, avocado, salty caramel, dates and nutmeg crept out. It was just complex enough to enthuse without losing any balance or being too sharp.

Palate-wise it was also reasonably well put together. Seven years ago I thought it somewhat sharp, but by now, after imbibing cask strength juggernauts by the caseload, I’m a more accustomed to heftier beefcakes and here, then, the XO faltered somewhat (which is a factor of my palate and its current preferences, not yours). Much of the nose returned for an encore: vanilla, nutmeg and a delicious caramel smokiness, more nougat, toffee, and some salt crackers. Bananas, papayas and some cinnamon made themselves known, with a little nuttiness and coffee grounds and molasses providing some depth, all leading to a short, warm and (unfortunately) rather bland finish that merely repeated the hits without presenting anything particularly new. It lacks something of an edge of aggressiveness and clarity of expression which might make it rank higher, but in fairness, its overall quality really can’t be faulted too much.

Anyway, so there we have it. A perfectly well-made, well-assembled, mid-tier rum with really good price-to-value ratio for anyone who wants a very decent rum to add to the shelf, good for either mixing or some sallies into the sipping world. That I remain only mildly enthusiastic about it is an issue for me to deal with, not you, though I honestly don’t know if we can expect off-the-scale magnificence from a Key Rum, since then it would likely fall foul of the Caner’s “3-A” Rule: it must be Available, Affordable, and Accessible. The Mount Gay XO not only ticks each of those boxes but has something else that has never really lost its lustre in all the years – a reputation for consistent quality and worldwide brand awareness. Those attributes combined with its pleasing taste profile may well be priceless, and give it a solid place in the pantheon, as one of those rums which any aficionado should try at least once in his long journey of rum appreciation.

If it wasn’t so pricey and hard to lay paws on (3000 bottles issued), I would have said the Mount Gay Cask Strength 63% should have dibs on this entry. That’s an outright exceptional Bajan rum.