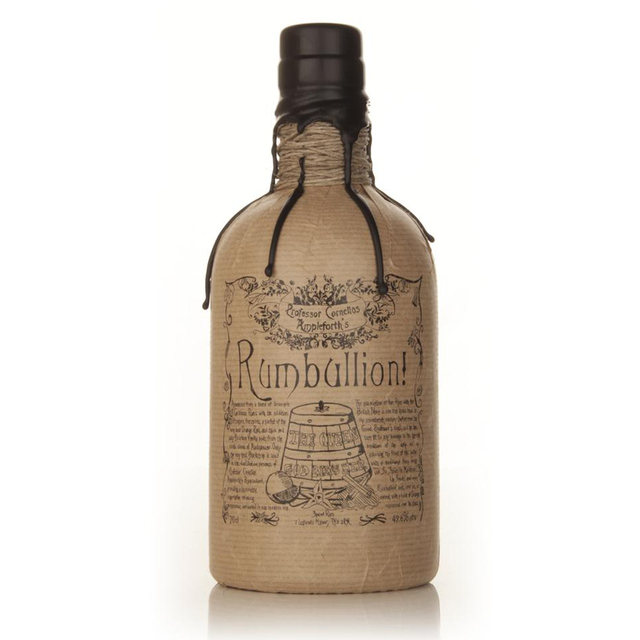 The name is almost Dickensian in its imagery. Professor Cornelius Ampleforth could be straight out of the Pickwick Papers…you know, some chubby, benevolent older fellow in half-specs and a faded waistcoat, with rather limited mental capacity, down on his heels, but possessing a good heart. Whatever – the name evokes a certain good humour and indulgence from us, and at the very least is evocative. That, unfortunately, doesn’t make the Professor’s Rumbullion a rum worth drinking, unless you are into spiced rums and like to have that in your drink (which I’m not and I don’t, so be aware of my personal preferences in this review).

Whether there really is a Professor Cornelius Ampleforth is subject to intense and spirited debate by all the same people who can tell you the middle name of the runner up of the 1959 Tiddlywinks Championship in Patagonia. The UK company which releases the Rumbullion is called Atom Supplies and under its umbrella of e-commerce and business consultancy, also runs the online shop Master of Malt, and the brand is their independent bottling operation.

They certainly have a sense of humour, as evinced not only by the Professor’s name, but the “Bathtub Gin” they also sell. What they don’t have is a desire to tell you anything meaningful – one has to go outside their website to find it’s a blend of unnamed Caribbean rums flavoured with various fruits, spices, and Madgascan vanilla. No countries, no distilleries, nothing else. An informational sinkhole of annoying proportions.

Bottled at 42.6% and darkly coloured within an inch of the Kraken, what we had here was a rum that assaulted the nose immediately with enormous and instant nutmeg, vanilla and cinnamon notes, caramel and toffee and chocolate, all of which rushed and jostled and ran heedlessly together like a mob entering a Black Friday sale where everything is 90% off. It was also rather thick and almost chewy, and while back in 2010 I appreciated the Captain Morgan Private Stock for precisely those reasons (no longer, mind you), here it was simply excessive, and there was no order to any of it, no gradual progression from one series of well-blended, coherent smells to another…and that made the whole experience something of a disorganized mess.

And by the time I got around to tasting it, those spices really became too much, which led to flagging interest, waning ardour and a lot of grumbling and head shaking. So there was cardamom, cinnamon, nutmeg and sweet dark chocolate – these were somewhat better behaved now – to which, with some water, were added scents of cloves, marzipan (I liked that) and candied oranges, at which point the party was over and I was blatted into near catatonia by just wave upon wave of cloying sweetness (quick Prof, pass the insulin!). So yeah, there were additional elements of taste that weren’t bad, just so strong and so much that it was like having seven incidences of coitus in one night – one wakes up the next morning with an utterly blank brain and no desire to do anything meaningful. Even the warm, short fade exhibited this oversweet sense of warm syrup, without adding any new notes – there was the incessant hammer of cinnamon, caramel, vanilla, and to me it was just overkill.

To its credit, as I don’t hide my preferences, the makers don’t hide anything either: it is a spiced rum, it’s trumpeted as such, and they’re proud of it. But as always, it’s mostly marketing that one gets when one checks: a secret recipe (hate those), fancy wrapping and no information on components or ageing, if any. I guess for less than thirty quid we shouldn’t be asking for more. This rum is squarely aimed at the casual imbibers who just want a tasty, tarted up, adulterated drink with a little bit of oomph and no hassle, and so although I acknowledge that spiced rums sell briskly for precisely those reasons, they really aren’t my tot of grog.