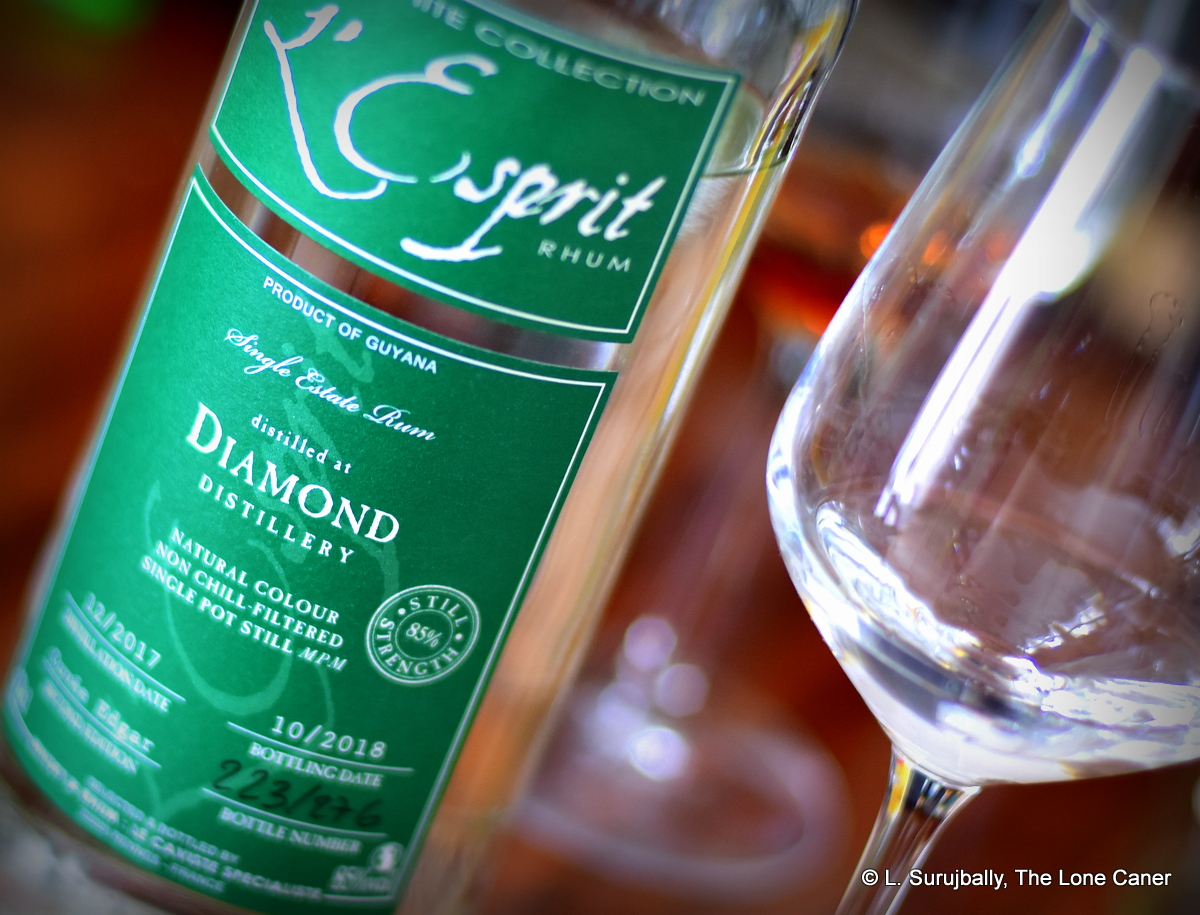 Usually, I don’t worry about not acquiring all those aged, rare or otherwise amazing rums that make the social headlines, since I know that most exceed the reach of my scrawny purse, my ability to beg, or the extent of my nonexistent wheedling skills. Too, after ten years of this, I’ve been fortunate enough to try so many rums that many of my personal unicorns have been tried and written about. Therefore I know it will strike many as rather peculiar that for the last two years I’ve been hunting for two very special rums issued by Tristan Prodhomme – and this one was the one I wanted most

Why? Because L’Esprit, in making the great white shark of the Diamond 2017, did Velier one step better, creating a rum whose stats would make just about every writer reflexively haul out the word “beast” and be correct to use it, whose profile not just encourages but demands adverbial density — and which I’m convinced will stand the test of time to become a baseline for all the makes-no-sense-but-by-God-we’re-glad-to-have-tried-it white rums that will be issued from now until the Rapture. It’s nobody’s unicorn but my own, and I’ve been looking for it since the day it got issued.

The Diamond white was confirmed to me as being a Port Mourant unaged pot still rum; it sat there, dissolving a stainless steel tank between 2017 and 2018, until Tristan, in a fit of madness, joy, bravery or unbridled enthusiasm (maybe all these at once) engendered by the birth of his son Edgar in 2017, decided to commemorate the event by releasing 276 bottles at 85% (this is actually a second edition – there is a first one, with similar specifications) – and I don’t know what happened, but they seemed to sink without a trace. But with the rise of white rums as taste-stuffed forces in their own right, I certainly hope others will get a chance to try something as torqued-to-the-max as this one is.

I’ll get straight to it, then, and merely mention that at 85% ABV, care was taken – I poured, covered the glass, waited, removed the cover, and prudently stepped way back.

Which was the right thing to do because a rapidly expanding blast wave of rumstink assailed me without hesitation. An enormously pungent cloud of wax and brine and tequila notes hit me broadside, so hot and fierce that somewhere in the basement I heard the Sajous weep. It was a massively powerful, sharp and meaty nose, squirting aromas with the cheerful abandon of a construction haul truck which knows nobody is likely to argue with it for the command of the road. Brine, olives, dates and figs and some sort of faintly rank meat was what I got straight off, batted aside by the smells of licorice, light molasses, sugar water and flowers, before bags and bags of fruit took over. Ripe yellow guavas, mangoes, papaya, avocado, overripe oranges, pears…the rum just wouldn’t stop spitting out more and more as time went on.

As for the taste, well, wow. My tongue was battered hard and fast with the sheer range of what was on display here. Being unaged and issued as a white didn’t hurt it or diminish it in the slightest, I assure you, because the integration was so well done that it actually tasted twenty proof points lower. It was redolent of brine. Of salt fish with Guyanese chilis (ask Gregers about those, I dare ya). Of wax, floor polish, olives. Of licorice. Of fresh scallions in a vegetable soup (I know, right?). Only when these dissipated did more regular flavours timidly come out to let me know they existed…flowers, fruits, lemon meringue pie, raisins, pears, oranges, bitter chocolate, cucumbers and watermelon. I had this glass going for two hours and it was every bit as pungent at the end as it had been at the beginning, and the finish – epic, long-lasting, hot, spicy – was similarly strong, diminished itself not one bit, and provided closing memories of sweet soya, brine, swank, pears and other light fruits. It was almost a disappointment when the experience was finally over. And lest you think my own experience is a little over-enthusiastic, Jazz Singh from Skylark got poured a shot of this thing at 4pm, and was still tasting, mumbling and drooling rapturously about the profile five hours later when we shoehorned him into an Uber. It’s that kind of rum.

The best thing about it may well be that it reminds us of the sheer range of what rums are, how over-the-top and off-the-scale they can be, even as so many rum makers try to inhabit the inoffensive centre. There are few indies or producers out there who would dare bottle something this feral as single mindedly as Tristan has done here – only the Habitation Velier whites immediately spring to mind. It’s an unaged white badass that boasts an impeccable pedigree from one of the most famous stills in the world, it has a proof nearly off the scale, and is not for the meek, the beginner, or the careful. One either dives in and takes the entire shot, or not at all — because the Diamond white is a stunner, a slayer, a majestically vulgar shot of pure canecutter sweat, proofed and jacked to the max, and if it’s not one of the best rums I’ve had all year, I can absolutely assure you it will always rank among the most memorable.

I keep score, and the Diamond takes its place among the growliest overproofs ever issued. I’ve tasted the following:

Note: if you are interested in a list of some of the strongest rums in the world, here’s one for you. All of the above rums are on it. 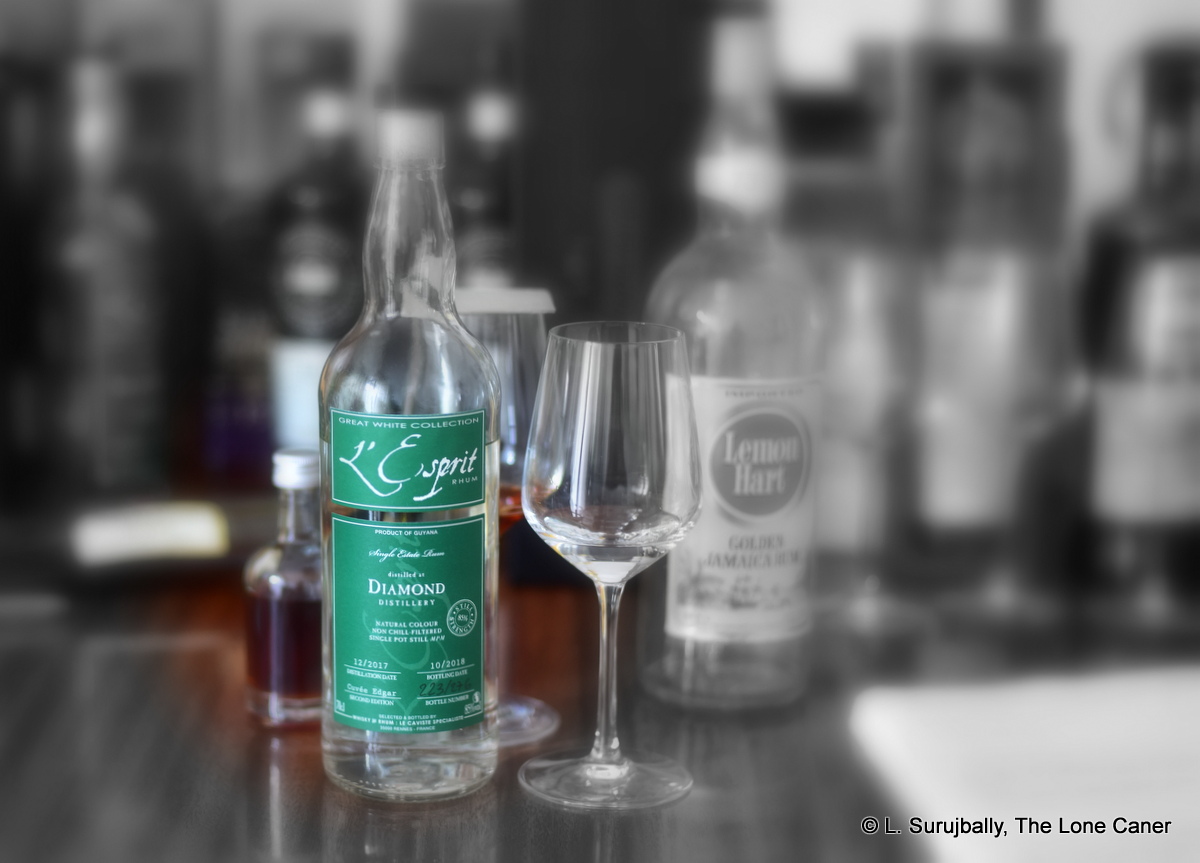