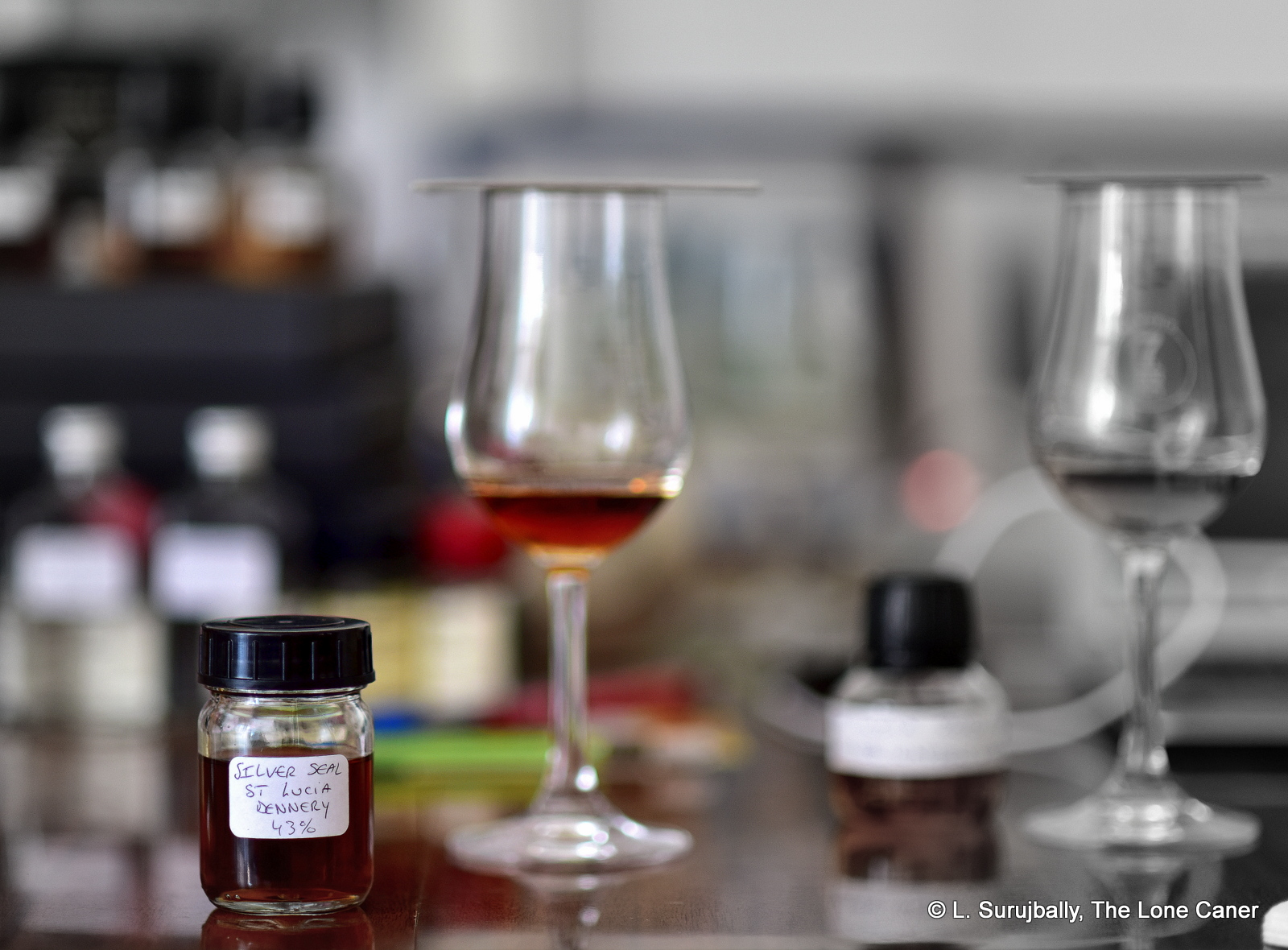 This rum has a very long title: it’s full name is the Silver Seal St. Lucia Distillers “Dennery” Special Reserve Rum, of the “Sestante Collection.” It’s something of a collector’s item these days, though issued relatively recently around 2017, and all the various terms on the label require some background explanation that might derail your interest in the review itself (unless you’re a trivia and history nut like I am and actually, y’know, enjoy this stuff).

Let me just provide some bare bones detail on the rum, get right into the tasting and then you can nod off to the extraneous material beneath that if you’re of a mind. Firstly, it’s a single cask bottling of 600 70-cl bottles watered down to 43% (hence the substantial outturn). It’s a no-age-statement and undated rum which is highly annoying given that it came from a single cask, and demonstrates that much as we like the indie bottlers, some (even the Oldies) still have a ways to go on matters of disclosure from time to time. Since there’s only one distillery on the island, it’s no hardship to deduce who made it.

That’s the easy part. Things get tricky from here: there are few references online about the rum – not a single reviewer I know has tasted the thing, and those that tasted its cousin, the “Superior” like Wes, Serge or Steve, had similar grouches about it, that there was just nothing to go on, and SS was not returning calls. The SS website was and remains completely useless; and as if that isn’t bad enough, there are three separate “Dennery” rums from Silver Seal: the Superior, the Special Reserve with a silver box (600 bottles, 43%) and the Special Reserve from the Sestante Collection with the dark red box (600 bottles, 43%). All display a similarly stunning paucity of information. 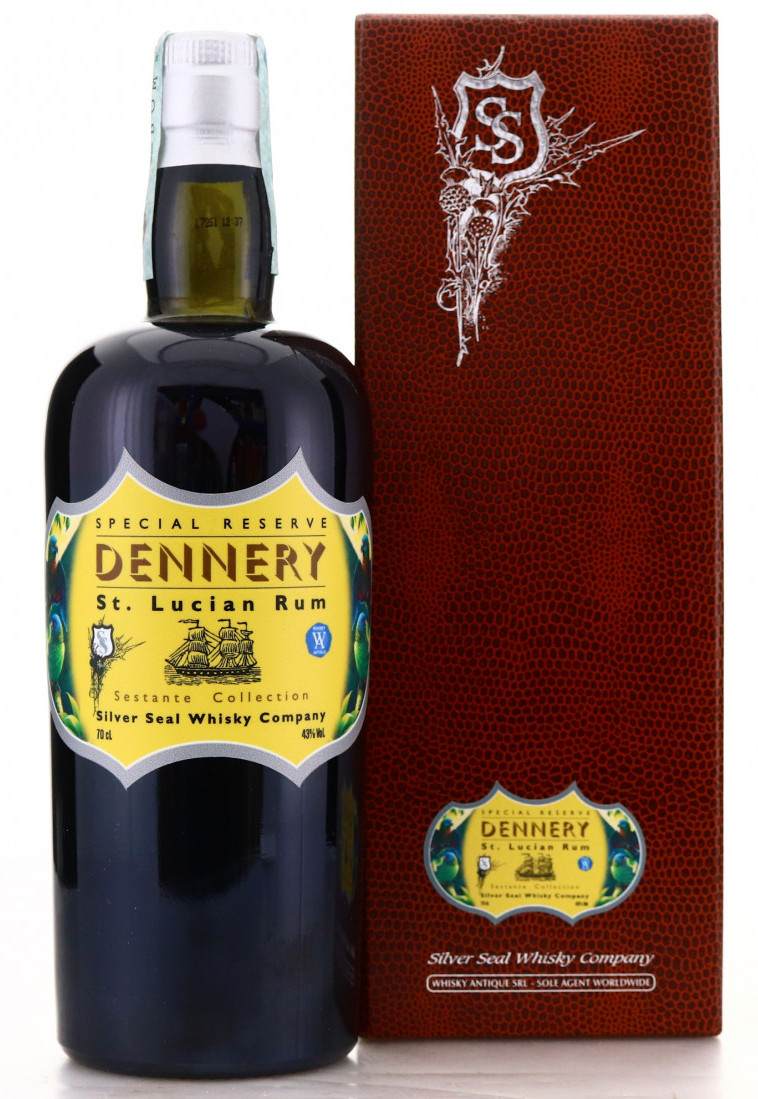 Another peculiarity is how dark it is – it possibly speaks to decades-long maturation, if one is feeling generous and if SS ever bothered to mention it. But probably not. A first sniff and a snoot rapidly dispels any such ur-aged collector’s edition fantasies. It presents immediately with such a deep black licorice note that I remember thinking this was a mislabelled Demerara. It smells of the rich, wet loam of newly turned garden earth after a rain. Thick aromas of licorice, bitter caramel, wood chips billow out, later accompanied by unsweetened chocolates, coffee, then citrus, chocolate oranges, mint, dark cake. It’s very solid and not subtle, and completely at odds with the 1931 series of rums I was trying alongside it. Or, for that matter, with the standard Admiral Rodney.

The palate was similarly odd…yet hauntingly familiar. It took me back to the jungles of Guyana where I worked as a young man fresh out of school, redolent of rotten, moss-covered logs decaying into damp dirt and leaves, under a dripping canopy speared here and there with dappled sunlight, and I literally cannot find another way to accurately describe this remarkable profile. It tasted of old and well-polished leather Berbice chairs, minerals, smoke, compost, unsweetened chocolate and dark fruits, creamy cake and just a touch of brine and lemon peel, leading into a long (for 43%) and dry finish that showed off closing notes of aromatic tobacco, dried prunes, dates and again, that leather.

Unusual? Yeah, it’s unusual. Based onthe writers’ tasting notes it shares a lot of DNA, it would appear, with the Superior — and this is where real info on each of the three releases would have helped us understand the tastes better. It reminded me less of a St. Lucian rum than an over-oaked Versailles from Guyana, and – in a strange way – even the dour wooden mustiness of the Saint James 1885. I’m going to give it points for unusual tastes and an interesting experience that does not fail (in my opinion, too often people mark something down because they expect it to be one way and then it doesn’t conform to the preconceived notion, for good or ill) but take away a few for excessive dark sweet oak and licorice that dominates too much.

So is it a buy? The SS Dennery does occasionally sail into — and out of — various auctions for under £200, so it’s something of a pricey-but-affordable indulgence. And it does have a solid indie name behind it, and tastes and samples well. Yet I can’t find myself recommending the thing. Not because it is too little like a St. Lucian, but because if Silver Seal didn’t care enough to tell us anything concrete about its age or its components or dates or stills, then either they’re too lazy to actually service their consumers in the modern age, or they know damned well what it is they’re peddling and are hiding it. This starving author ain’t buying on either account.

Opinion (adapted from my coment on FB)

I make a lot of noise about prejudging rums based on expectations, and indeed, I firmly believe it is hard to let such notions go when you know you’re tasting a rum this old, from that distillery located in this-or-that particular country. Your experience and background serve to provide background and comparators. As well as, of course, your preferences, biases and likes/dislikes.

But I also believe in the provision of information by the bottler, and to evaluate a special edition – which this supposedly is – one has to know what exactly is special about it: is that the age? provenance? distillation? great harvest from a special year? fancy barrels?

None of this is provided by Silver Seal, and yet within that limitation, the rum is quite nice (though a rather startling divergence from what we understand to be St. Lucian rums). But the opinion on “just the profile” is now harder to contextualize because that’s the only data point there is. Is it as good as other rums that old, other rums that come off of that still, that strong, that year? There’s simply no way to know that or discuss it, and as such I find myself not recommending it for the buy unless you really want to get it and have the free coin. Which I don’t and I don’t.