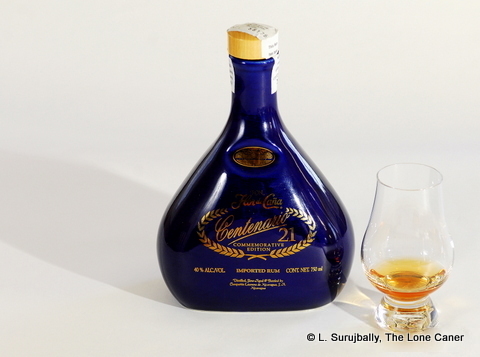 A better than average presentation, for a rum that supercedes its age

The Flor de Caña 21 is a good example of ensuring you know what you’re buying before you fork out your hard earned pieces of eight. I’m being redundant here (most other online reviews make mention of this), but I note the matter because all other Caña products have their age statement clearly and unambiguously front and center: 4 yr old, 5 yr old, 7 yr old, 12 yr old, 18 yr old. You can hardly avoid that: it’s on the front of the bottle and if you miss it, you aren’t paying attention in your hurry to peruse the price information. But the veinte uno doesn’t habla in this manner. The 21 doesn’t refer to the age, but the century for which it was bottled, and it’s actually a fifteen year old, which is noted in small gold lettering on the back. And this may in fact be reflected in the price: I paid ~$70 for it, and one would expect a 21 year old to be closer to, if not exceeding, a hundred.

Presentation was first rate – while I would have preferred a box or a tin for something this aged, I could live with the blue bag and the matching opaque blue bottle, since I’m a sucker for originality (and recall, the brilliant 18 year old doesn’t even have the bag, let alone a box). The rum itself pours into the glass in a tawny amber colour; it presents slow fat legs, for which I’m beginning to run out of amusing metaphors to describe: let’s liken it on this occasion to a Bourda fishwife’s plump gams.

The nose in this thing is, quite frankly, outstanding. It’s deceptive as well, because it starts out as a caramel-molasses scent, very smooth and hardly stinging your schnozz at all…and then morphs into a clear, clean floral and herbal scent that is delicate and assertive at the same time (I know no other way to express this lovely nose – most dark rums are either medicinal or overwhelm with burnt sugar and molasses, but not this one). In fact, I liked this so much that I spent an inordinate amount of time dipping my beak into it just to revel in its pleasures.

The body is medium (the bottle says full-bodied, but I’m not entirely convinced of that), just enough sweet mixed with just enough flavour and alcohol. The profile on the tongue is something else again: rich, caramel and sugar undertones, bound together by molasses and – once more – that unique hint of clean flowers, just faint enough to draw attention and balance out the muskier sugars, yet not so much as to overwhelm. The balance really is quite good. The 21 exits in a smooth and gentlemanly fashion, with barely a sting, and yet here’s a bit of a letdown: the finish is shorter than one might expect. An excellent nose and taste and coating on the tongue and throat, you understand: just short, as if the gentleman was visiting a house of ill repute, and now, having completed his business, wishes only to put on his hat and depart the premises with all due dispatch. 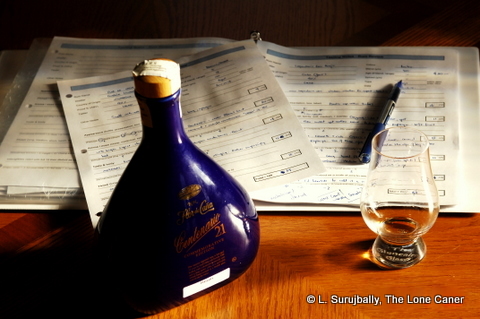 Flor de Caña (flower of the cane) rum is made in Nicaragua, and is one of the most consistently good dark rums I’ve ever had, at any age (I simply adored the 18 year old). The Compañía Licorera de Nicaragua was founded in 1937, though workers of the San Antonio sugar refinery had been distilling their own festive hooch for local celebrations for maybe half a century before that. The success of the distilling company led to expansion and to exporting rums to other countries in Central and South America by the late 1950s. Following on the heels of the trend established by DDL in 1992, they began to issue aged premium rums (though stocks were surely laid down before that…after all, when was the 18 year old I had in 2009 put into a barrel?). And since 2000, these rums have been recipients of numerous awards for excellence. No argument from me on that score.

It’s an overworked and abused cliche that 20% of Americans can’t find their own country on a map, but this is surely not an issue with anyone who knows his rums. Within the subculture, the great spirits of the small nations in the Caribbean and South America stand out as beacons of light and pride for their makers…and none of us who ever taste one of these great drinks is any doubt where Venezuela, Guatemala, Guyana or Nicaragua is. We know the nations, we know the geography and we know the history. We know of and care about, above all, the premium products of these small states, and what makes them special. In increasingly disconnected, fragmented world, rums like the Flor de Caña 21 are almost like national symbols in and of themselves: they have the power to bring us together and educate us beyond their fleeting, ephemeral tastes.