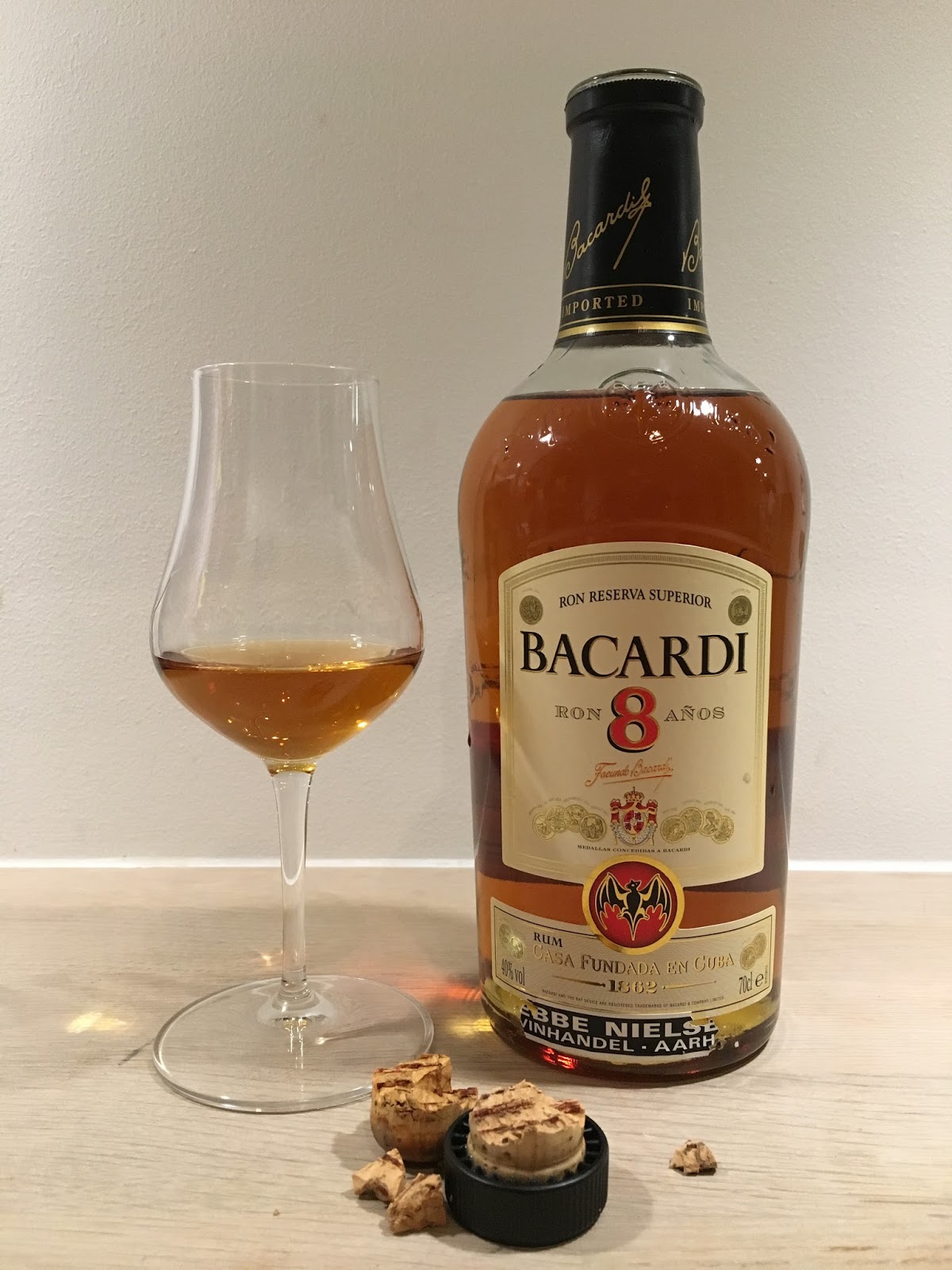 A tentative foray, a single spy, sent into the camp of the premium rums, perhaps to scout out the territory for further invasions to come (we can hope). Capture one and be surprised by its low price and overall quality. If Bacardi can make this one, I don’t know why they don’t come charging into the high-end market in force.

Maybe it’s just me, but I sometimes find stronger notes and more positive tastes at the middle and lower end of the price and snoot scale; more premium rated rums can get their cachet from age statements, distillery snobbery and the supposed excellence and uniqueness of their maturation process…but don’t consistently please (or awe) the drinker any more than a regular rum could (sometimes even less). A lesson that does not seem to have been lost on the subject of this review: the 8 year old Bacardi.

Observe this brand. It’s the best selling rum in the world. It smartly moved its operations to Puerto Rico and then to Mexico in the pre-WW2 years to take advantage of favourable tariff regimes with the US, and created a marketing campaign which made it the pre-eminent tropical drink of its time. A series of extremely capable family members (some of them in-laws) kept the voting shares and quality control up to scratch into the modern era. And yet, it is considered fashionable today to bash the brand for its commonality and staid middle-of-the-roadishness.

Part of that is its utility. The damned thing can be used for anything. You can cook with it, drink it, mix it, use it as a base, an ingredient or a mixer. It has no real character except its lack of one. It’s bland. It’s like the a ’40s jeep or ’50s Land Rover or ’70s Toyota. It’s the faceless English banker, the anonymous Japanese salaryman of rums. It is, succintly put, often seen as boring. But my lord, does it ever sell. The gold, the black, the white…they can be found everywhere

The 8-year old is something else again. Bacardi blends for the most part, but they’ve taken the time to put together this tawny golden blend of rums aged eight to sixteen years old and aged in used white oak barrels that once held sherry. This might account for a softer and more candied nose than one might expect from what could be seen as just another young rum. It’s a tad sharp, yet not so medicinal as others I’ve had. I’ve always meant to try it for that alone.

Tasting is a surprising delight: the slight sting to the nose disappears entirely, and a body of some substance makes sipping this without ice a definite must-try. It’s not as sweet as other rums, and the arrival on the throat is more like a dry, rich brandy, or the Bruichladdich Renegade rums. It’s got a solid flavour profile, with traces of vanilla, nutmeg and light fruity undertones, perhaps peaches. More to the point, it has real body, not some kind of anorexic thinness reminiscent of its cheaper cousins further down the scale. And the finish is excellent, with a slow deep burn, not a sting: this rum is more like a decent whisky, I judge, with just enough sugar in it to keep me liking it. A lot. I’d sip it straight with no problems, on ice without doubt, and as a mixer in any situation.

Bacardi 8 does not try for superiority (although the packaging is quite decent for its price and age…I particularly liked the cork stopper). It really is a good mid ranger, and in its own way, defines what a good rum could be if it doesn’t hanker after any kind of pretentiousness. A superstar it’ll never be: as an all rounder, it may be one of those undiscovered steals that those who patronize the low-end rums feel is a find all their own, and they’d be right to think so. You wouldn’t be wasting your thirty-plus bucks if you dropped them on this quietly impressive product.