So what exactly are pot stills or columnar stills, batch vs continuous stills, steam distillation, freezing distillation or fractional distillation in the production of rum (or that other scottish drink)? And which one leads to better rum? I mean, I’ve made mention of “used the original pot stills” in my Pusser’s review, and in “Classifying rums” I noted that useage of pot- versus columnar-stills is to some extent geographic in nature and affects the output. And there’s something traditional and evocative about the terms. But what are they?

All stills (the word derives from old middle english ‘distilling’) are descendants of the ancient alembics, which were simple devices to capture vapours and condense them. The word alembic comes from the Arabic, and the supreme richness of the irony that a people opposed to alcohol inventing the first stills is one of those things that makes history worth reading, to me. Those who remember their high school chemistry (or like me, simply like blowing up chem labs with weird concoctions), will recall that alcohols vapourize at a lower temperature than water — all stills are based on this fundamental property . (They also freeze at a lower temperature, which is why freeze distillation can be used in colder climes to produce alcohol by skimming off the unfrozen alcohol settling on the frozen water beneath it).

A pot still is a simple closed container containing the ‘wash’ or ‘wine’ or ‘mash’, to which heat is applied. Most are metal – copper supposedly gives the best results because of chemical interactions that enhance taste and also removes sulphur compounds – but I’ve heard of glass, clay and even wooden ones being used. Vapours arising at the top of the ‘pot’ as the boiling point is approached are drawn off via a tube or coil, which is run through a colder liquid, thereby condensing the alcohol rich mixture. This mixture is about 25-30% alcohol by volume, and all alembics or moonshine stills usually stop here. However, more sophisticated pot stills take this primary result – the so-called ‘low wines’ – and run it into a secondary pot still for a second run, which produces a colourless ~70% ABV resultant. Moonshiners add ‘thumper kegs’ or ‘doublers’ to their stills to get precisely this effect. This is then drained off into casks or barrels for the final maturation period, and the ageing here produces the brown colours associated with rums or the scottish tipple.

A pot still is a good example of batch distillation: the pot is charged with one batch at a time, and when it is done, another one is introduced. It was and remains, therefore, comparatively energy inefficient and time consuming: but its prime disadvantages were its expense and the fact that each batch would taste different, and so quality see-sawed widely.

Several doublers can be added in series, each draining off the high proof alcohol mixture into the next thumper keg, boiling that, creaming off the higher proof vapours and sending that into the next keg in line, and so on. This is, however, very energy inefficient, and it was discovered that putting pots one above the other is more practical, faster and resulted in higher volumes, and a constantly circulating wash that could be recharged without pause. This is the basic principle of a columnar still, in a continuous distillation cycle. 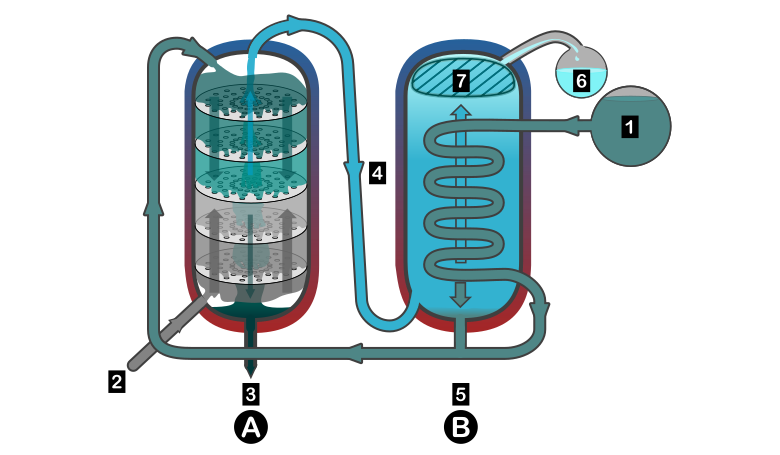 A columnar still is a more complex series of vertically arranged pot stills, where, instead of real pots, there are varying levels filled with packing or ‘bubble plates’ in one of two columns. The wash (sometimes known as ‘distiller’s beer’) is injected into this column, called an analyzer (A) and falls, while hot steam is introduced at the bottom (2), and rises. The rising hot vapour, low in alcohol, starts to condense as it rises to the cooler upper layers; since the temperature of each of the higher layers is successively lower then the one beneath it, the vapour in equilibrium with the falling liquid is successively richer in alcohol (this has to do with partial vapour pressures and is more mathematically complex than I need to discuss: but the physics is sound).The highly enriched vapour is then taken off and drained (4) into the rectifier (B). The more volatile alcohol vapours rise to the top and are drawn off and condensed. The remaining impurities and ‘lower’ alcohols condense by using the cooler wash itself (1) to liquify it. The impurities are removed by filters and other reagents, and the resultant joins the wash at stage 5, and is recycled into the analyzer.Because the vapours may have several different kinds of alcohols at (7), each with its own condensation point, the condensing vapours can be drawn off at any level in the rectifier, each giving a different fraction of alcohol (I have simplified the process for ease of expression), or strength: this is why the process is also called fractional distillation, andexactly the same process is used in petroleum refining to produce differing kinds of products from a single feedstock source (there is of course catalytic cracking as well, but doesn’t apply to likker and so I decline to go further in that direction).

This is the great advantage over pot-stills, because while a typical pot still can get a mixture that is 40-50% alcohol on a first or second pass, the columnar still can have a vapour alcohol content of close to 96% with less energy input. As well, feedstock (the wash) can be introduced continuously since enriched vapour is drawn off automatically on a constant basis. Columnar stills benefited because they offered speed, immense capacity, greater economies of scale, significantly lower unit rate costs and more consistent quality…but they did cost more, and so required a greater capital outlay of the kind only businesses could muster.

All of this is fine and dandy, I can hear the rummies and scotch-lovers grumble, but which one produces the better end product? After all, pot-stills have a long and noble tradition and are still used (Pusser’s, for example). Quality control and chemistry have improved to the point where pot stills can make consistently high-tension hooch that isn’t noticeably different from one batch to the next.

Most light rums are produced from continuous stills, and are highly purified and blended, perhaps even aged for a few months, or charcoal filtered, in order to produce a smoother palate. Heavier, darker rums are traditionally made in industrial-sized pot stills, which are less efficient and have carry-overs from congeners (additives both intended and not, such as caramel, esters, phenols or a “peat taste”). But there’s no hard and fast rule, as far as I can tell.

Most Caribbean islands and the South American mainland use columnar stills, with Guyana, Martinque and Barbados utilizing both kinds. Bundie is distilled in Australia using column stills, as are all Asian rums made in Thailand and the Phillipines.

Speaking for myself, I can honestly say I have no preference. The distillation method, to me, is less important than that of the ageing the end product undergoes, and the additives put in. The older rums have been the best I’ve had so far, with honourable mention going to that famous working class tipple, the EH5. The purpose of this article has not been to rank one method against the other, but simply to explain what they mean, and while some detail has been omitted in the interest of clarity, I hope that’s what I’ve managed to achieve here.