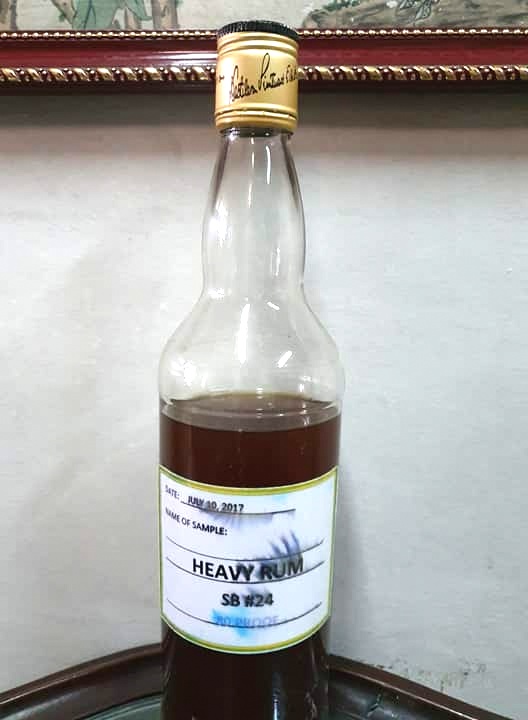 I should begin by warning you that this rum is sold on a very limited basis, pretty much always to favoured bars in the Philippines, and then not even by the barrel, but by the bottle from that barrel – sort of a way to say “Hey look, we can make some cool sh*t too! Wanna buy some of the other stuff we make?”. Export is clearly not on the cards…at least, not yet.

But most of it is blended with the same company’s middling rum called the Very Old Captain, which wasn’t “very” anything, not all that old, and had nothing to do with a Captain. The reason why I review it — in spite of this kind of limited availability — is because the title pushes two of the buttons that appeal to the lizard brains of all modern rumistas — “Single cask” and “Pot Still.” And, even with its rather indifferent ageing and milkmaid-level strength, it shows that when they want to, companies over there can in fact do more than just issue nonsense like the Don Papa 7 year old, or play with labels the way Tanduay did with their “1854”.

Limtuaco makes some supposedly decent rums, mostly column still, from molasses. The Captain mentioned above is one, and there’s 8 and 12 year olds that look quite interesting, but all the background reading I’ve done on the company (which has been around since 1852) says that they have a pot still, and they use it – not for really strong and stern bastards of power and originality in their own right, but to make more flavourful rum that they then use to blend with everything else…sort of like a locally made DOK wannabe.

Still, if we expect dunder and funk and sweaty fruits oozing out of the glass when we pour it, well, that’s not going to happen. In point of fact, it noses with a standard profile, if a weak one. It has some briny notes, an olive or two, mostly reminding one of sucking a maggi cube; and some really faint rubber action, some acetones, nail polish, baking spices, sorrel drink, even a bit of molasses and ginger. Which is nice, but the fruits that would balance off the firmer notes are missing.

That said, I liked the nose somewhat better than how it tasted. It presented as dusty and dry, and very very light – it didn’t glide or flow across the tongue, it breathed on it (and not for long, either). There was a panoply of easy-going fruitiness here – guavas, watermelon, papaya, a red grape or two and another olive, and overall the strength did not permit anything more forceful and distinct to emerge. The finish continued this downward spiral by being practically nonexistent – it was sweet it was thin, it was watery, there were some pears and papaya sprinkled with salt, and it was over before you could say “where’s the pot still?” in Togalog.

And that’s pretty much the problem. A pot still, that simple batch apparatus so beloved of Rum Geekdom, is supposed to give off some distinct flavours, at any strength. Too little of that was in evidence here, and the ageing – however minimal – did not seem to have had much of an effect. In fact, I was told that the ex-bourbon casks were not that great to begin with (and really well-used), and the colour derived from an over-enthusiastic hand with the e150.

But if nothing else, what this over-the-counter, oddly-distributed, standard-proofed rum-for-blending-only shows, is that there is some potential here, and that Limtuaco really should try to do better with what they have to work with. I honestly didn’t think it was a complete wipeout — it was just not a stellar product, and if they ever got better barrels, put some decent ageing on it and dispensed with the caramel colouring, then we wouldn’t be confusing it with a cheaply-made and indifferent booze sold by the gallon on some small tourist-trap local island. Then we might think it’s a real rum…one worthy of searching for, and buying.