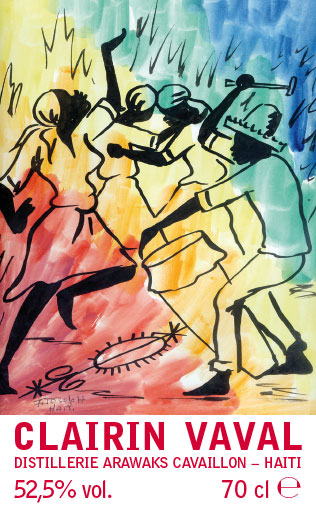 Full of get-up-and-go instilled by the momentous encounter that was the Sajous, I sprang for both the Casimir and the Vaval (plus a Sajous of my own) at the first available opportunity. Because come on, originality and going off the reservation in the rum world are vanishing ideals, and it’s not often that a rhum is so amazingly, shockingly off-base that it’s in another ballpark altogether.

Such a rhum was the Clairin Vaval, produced by Fritz Vaval of Haiti in his charmingly old school column still — made, if you can believe it, with leather trays and a condenser made from old petrol cans. Luca Gargano of Velier, while gaining greater fame for his own rums and his push for a clearer classification system for the spirit, was the man behind the attempt to bring the Haitian clairins to a wider audience a couple of years ago. Good for him for using his bully-pulpit for such a cause. Because while the clairins are not to everyone’s taste, I can tell you with some assurance that they are among the wildest, angriest and most rip-snorting rums available…and also, to my mind, ferociously, laughingly good. You can almost imagine the Fritz’s fiendish giggles in your mind, as you gaze at your glass the first time you try the Vaval and give vent to a disbelieving “Putain mais c’était quoi ça?”

By now I was more familiar with, and expecting, the initial salt wax nose-bomb, so after experiencing that (I hesitate to say enjoying, since that might stretch credulity to the point of disbelief), I paid rather more attention. There were fusel oil and kerosene backbones to this colourless liquid, mixed in with gherkins, vinegar and garlic (really!). The pungency of the rhum was as ripe and randy as the Sajous, and only grudgingly gave way to vanilla, sugar water, freshly sliced cucumbers and a sort of clear lightness of watermelons and maybe pineapples – very very light fruit, being hammered home by strong overtones of an unaged pot still product.

The palate was much the same, just more of it. Oily and salty and somewhat rubbery on the first attack, with sweet water backing it up. Very strong and almost sharp, of course — it was 52.5% after all — but not raw or pestilentially fierce, not seeking only hurt. Rather, it was thick and warm and almost fatty. Once the first tastes move on and it opened up (helped with a little water), billowing and very heated tastes of breakfast spices, white sugar, olives, fresh-cut grass, a flirt of vanilla and some more of that kerosene made themselves felt. Dynamically, assertively, full-throatedly so. You kind of have to breathe deep after each sip when sampling this rhum. The finish was long and not a bit dry, closing the show with some lemon zest and an odd hint of pickles with all the various leaves floating around in it. Trust me, the flavours linger for a hell of a long time on this one, and you almost want it to.

That was some drink. It was only as I tried it in concert with the other two that its own individuality became more clearly discernible – on its own, or tasted apart, they might all seem quite similar, but they’re not, not really. Each is as distinct as an adjacent piano key note. Like the Sajous or the Casimir, I would not recommend this unreservedly to the larger population of the rumworld; I would however suggest that if you can, give it a try, very gently, just to see where rum could go if it really felt like it. Because these gents from Haiti may be the last surviving remnants of microdistillers who make rhum in a totally old fashioned, organic way and you could argue that you’re seeing what rhum was like in its infancy when you try one.

There’s something about clairins that defies easy description. They’re so pungently, tartly original, so immensely weird, and yet so absurdly tasty, all at the same time. The nose is enough to swat away an angry bear, sure, but that taste…oh man. There I was at 2am, on a cool, crisp October night on a balcony in Berlin, switching from one clairin to the other, making my notes, enjoying the heat, revelling in the tastes, and I felt something unusual, and you know what? It might have been happiness.