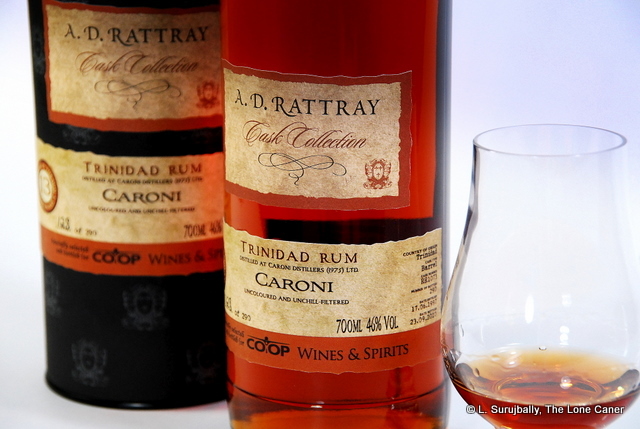 I wrote the full review for Michael Streeter of the RumConnection website in December 2010, and here is the summary :

The price is reasonable, the colour, body and nose are lovely, and the taste is unique, if a bit harsh: if the rum fails at all, it’s in the decision not to mess with it – this has led to the prescence of oak maintaining an influence not all will appreciate. Are other similarly aged rums better, tastier, smoother and more complex? Yes, absolutely. But I also think that the Caroni is one of a kind, a rum lover’s secret discovery – a sort of prime number of a rum, which is indivisible by anything other than you and itself.

The website link to Rum Connections is here and here is the full text:

Why the bottle of A.D. Rattray Cask Collection 13 year old Caroni rum (bottle 128 of 290) states it is “made exclusively for Co-Op” (a grocery chain) on the label is a mystery to me1. This is especially the case since I have been able to find it on sale in at least two other countries, and the labels on neither have any such mention. I can only conclude that this is a distribution issue, not a matter of commissioning or purchasing some kind of exclusive bottling (which both other merchants in Calgary — the Kensington Wine Market and Willow Park – indulge in).

The selling point of a rum like this one is never just the rum itself, but exclusivity, limited bottle-outturn, and rarity. Like the Appleton 30 (1440 bottles) and the English Harbour 1981 (5774), this is an extremely limited edition of 290 bottles, emerging from a single cask. As if this were not enough, it’s 13 years old and un-chill filtered, as well as having no additives at all – just like the two Cadenhead offerings I’ve tried – and these last two points are the Caroni’s great strength and also (to some) a weakness. Fortunately, and curiously, the price of the rum when I bought it was in the forty dollar range, which seems low ….either it isn’t that exclusive, not that good, or someone is testing the water to see if the price point can be supported for premium limited-edition rums as they are by whiskies.

The name of the rum comes from the Caroni (1975) Ltd sugar company of Trinidad and Tobago, which was established in 1887 and taken over by the government of T&T when it acquired Tate & Lyle’s shareholdings in 1970 (51%) and 1975 (49%) – it went under because it consistently lost money and no buyers could be found, in 2004. This may well be some of their last stock still available commercially as a bottled product so even if the rum is not to your liking, it’s possible that as an investment…well, it’s up to you.

The rum itself was attractively packaged in a black cardboard tin, in which a slim bottle of light amber fitted tightly. Tin foil wrapped around a well-seated cork. It’s a thing of mine that I enjoy the voluptuous sound of a cork popping gently out, so points there. At 46% ABV, I’m was not expecting a gentle nose that tenderly massaged my snoot and beckoned invitingly with soft, caramel-scented breath, and I didn’t get one – but it was not as sharp and medicinal as I feared either. In point of fact, it was, in spite of its lack of “post processing”, rather good. Distinct, and clear, separating early into notes of vanilla, nuts and burnt sugar, with the muskier molasses scent underlying everything. And yes, a claw or two to remind you of its slightly higher alcohol content.

I don’t know how many people reading this have ever seen a sugar cane field burn in the tropics at harvest time, and can speak of the experience (I’m one of them): there’s a kind of deep smell of burning brown sugar that permeates the whole area, and lingers in your nose for days. I’ve always liked it when handled well within a rum’s bouquet, perhaps because of the memories it evokes of my boyhood. After leaving the Caroni to open for a few minutes, that lovely aroma stole around and about the other scents, which gradually became identifiable as faint hints of citrus fruit and notes of cherries, not so ripe as to be cloying…just young enough to impart some sting. I could have gone on smelling that for a lot longer than I did.

The body of the Caroni turned out to be sharper than I personally preferred, and lighter, clearer: definitely a medium bodied rum, hot and spicy on the palate, and a bit dry. This mostly likely comes from the additional spirit of the 46% I was sampling, as well as tannins from the thirteen years of ageing in the oak barrels, which was not mitigated. The lack of additives also played its part: that lack is a point of pride of the distiller, but I’m just not convinced it really works for rums, no matter how much it succeeds for whiskies (rummies like their libations sweeter, as a rule). On the other hand, by eschewing the chill filtering process, all the original oils, fatty acids, sugars, esters and phenols remain in the body, and this was what probably accounted for its somewhat richer taste. Certainly, after the peppery spiciness faded, the sweetness (less than usual but still noticeable) came through more clearly, as well as banana, smoke, leather and – alas! – just a shade too much oak.

The fade is excellent, bar the same issue – the burn is deep and long, and that burnt sugar and caramel taste lingered, and spirit fumes wafted up the back of my throat and just…stayed there. The bitterness of the barrel was unfortunately part of what lingered also, so on that level the Caroni failed for me, but I’m perfectly prepared to accept that others will enjoy that aspect more than I did. As an aged rum, as a sipper, therefore, I must concede I like it above the more expensive offerings from Cadenhead; and as a mixer the Caroni is unique and superb (and the lower price makes it suitable for a better than average cocktail for those inclined that way – though who would do such a thing is unclear). Where I think it falls down is in the thinner body and lack of any attempts to mute the oaken taste, which fortunately is not so prevalent as to overpower everything else, just prevalent enough to make a good rum fall to the middling rank, instead of inhabiting a loftier plane in my esteem (although this may change).

A.D.Rattray, a company established in 1868 by Andrew Dewar and William Rattray, was originally an importer of olive oil and European spirits, which branched out into blending and storage of malt and grain whiskies. Now owned and operated by Mr. Tim Morrison (formerly of Islay’s Morrison-Bowmore distillery, and a descendant of Mr. Dewar), its core mission is to make unusual, exclusive, limited edition whiskies from stock obtained from all the unique whisky producing regions of Scotland. The company would appear to be going with a trend now gathering steam – that of premium scotch makers branching out into other spirits, like rums. I’m all for innovation – I found the Renegade line of the Bruichladdich distillery intriguing essays in the craft, and for all my occasional dislikes of the Cadenheads, I must concede they have tried to take rums in a different direction than the heretofore dominating “sweet and brown” philosophy – and I look forward to seeing what else comes out in the future from such out-of-the-box thinkers.

In summary, the price is reasonable, the colour, body and nose are lovely, and the taste is unique, if a bit harsh: if the rum fails at all, it’s in the decision not to mess with it – this has led to the prescence of oak maintaining an influence not all will appreciate. Are other similarly aged rums better, tastier, smoother and more complex? Yes, absolutely. But I also think that the Caroni is one of a kind, a rum lover’s secret discovery – a sort of prime number of a rum, which is indivisible by anything other than you and itself.

Quite aside from its coming rarity and decent pricing, that’s enough of a reason to give it a shot.

This included, I’ve looked at eight Caronis in depth, most sourced in 2014. They are:

…and a bunch of short-form Rumaniacs reviews, here: