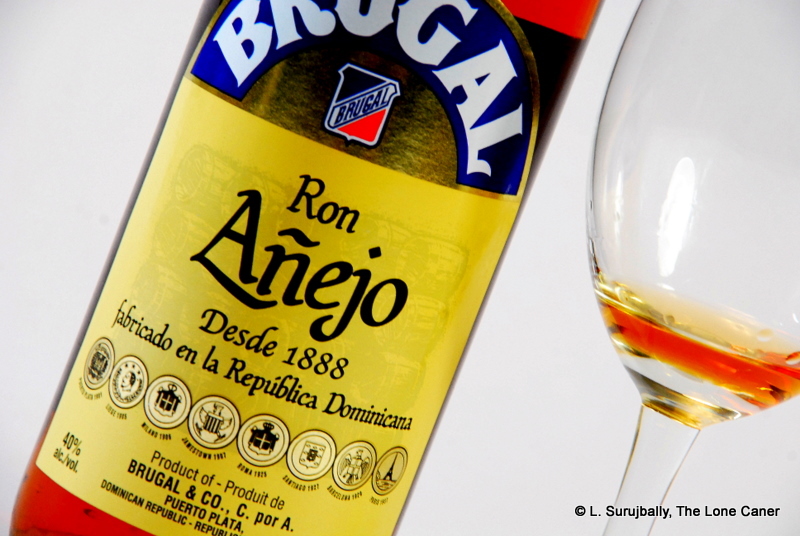 Ron Añejo Brugal is one of two rums from the Domincan Republic which I tasted side by side last Friday. Not to be confused with Dominica, the Dominican Republic is the Spanish speaking eastern half of the island of Hispaniola…the western half is Haiti. Three distilleries known as the Three Bs operate in the DR: Bermudez in the Santiago area, the Santo Domingo distillery called Barcelo, and Brugal in the north coast. Brugal, founded in 1888, seems to be the largest, perhaps as a result of being acquired in 2008 by the UK Edrington Group (they are the makers of Cutty Sark), and perhaps because Bermudez succumbed to internecine family squabbling, while Barcelo made some ill-advised forays into the hospitality sector and so both diluted their focus, to Brugal’s advantage

The term añejo simply means “aged”, and in this case it’s just a question of how long. Given the cheapness of the bottle (~$30 in Calgary Co-op) you can sort of assess that it’s not a double-digit rum, and indeed, after doing some research, I confirmed it to be a blend of rums aged three to five years in the usual used oak barrels that once held bourbon. The rum itself is a solidly mid-tier offering, golden in colour, in an utterly undistinguished, average looking bottle with a white plastic cap (plastic? sigh…). I don’t always agree with the Arctic Wolf in Edmonton on his assessments of rum, but both he and The Bear share this one thing: they despise cheap crap, in particular, bottle caps made of tinfoil or plastic (against this, you have to understand that the Bear in particular hates being dinged for extra crap which adds only to presentation…it gets a bit confusing at times).

All this preamble aside, what’s going on with the profile? Well, if you want me to cut to the chase, the bottom line is that Brugal Anejo is a solid mid-tier rum, with a smooth finish that makes it just barely edge into sipper territory. Stop reading now if that’s all you needed.

In the glass it’s a clear dark toffee colour, which leaves a nice clear film on the side of the glass which gradually disperses into thin legs. The initial nose is sharp and medicinal (did I ever mention how much I hate this?) which, once the rum sits a while, devolves into light vanilla and caramel notes with a clear sweet floral note that I quite liked. Gradually, a second and third nosing will take you back into the comforting arms of the caramel, molasses and burnt sugar flavours, but they are light and clear in a way that is at odds with the heavier, darker flavours of the Guyanese El Dorados (or even the Jamaican Appletons).

The body of the rum is medium light… in fact, it’s almost thin, the way Doorly’s XO was. Be warned: this rum is not sweet, and this means that the overall feel on the tongue is more like a cognac, an opinion reinforced by its overall driness. The lack of sweet translates into something almost salty, like an ocean breeze tang, or something autumnal (which may be the oaken flavours coming through), and it’s intriguing without entirely being something I cared for. And as with the nose, after a moment you can taste the burnt brown sugar flavours coming subtly through on the back end – much more so than the Doorley’s I could not learn to appreciate. On ice Brugal’s is not recommended – the ice will close this baby up faster than a nun’s habit in a brothel – but as a mixer? Hmmm. Pretty damned good.

The delight of this rum is the finish: Brugal is astonishingly smooth. I don’t like the lack of sugar in the flavour profile because this to some extent affects how long the finish lasts and how heavy the rum feels, but even with the short time you feel the rum on the swallow, you get no burn or scratch or bite whatsoever. It’s nothing short of amazing, and for this I gave it a high thumbs up. Overall, this is not quite my kind of rum – I’ve made mention of my liking for heavier, darker and slightly sweeter variations – but I must be honest about it. If your liking is for less sugar than I prefer, then this low priced mid-range likker from the Caribbean will be right up your alley and is absolutely a good value for your thirty bucks. If that’s your thing, go for it.