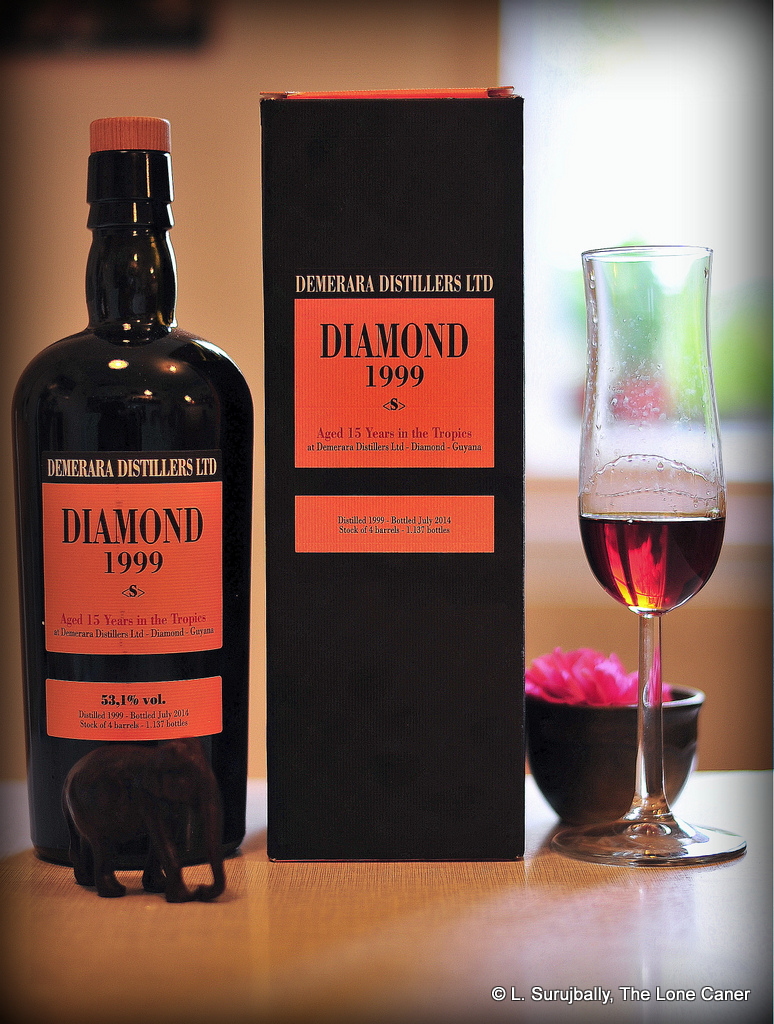 Velier has created a heated, tasty, toasty Demerara rum that in my opinion takes its place alongside the UF30E and the Skeldon 1973 as one of the best rums they have ever made.

More than “42”, here’s the answer some of the great and grand questions of the universe. When asked by the inquiring, “What makes anything you say worth hearing?” or “Why should I sleep with you?” or “Why’s the front door smashed in?”, all you need to do is smile, shrug, and point to this rum.

Velier’s rums sometimes seem similar when described (look how many Caroni rums they’ve put out the door, for example): but their lines are unique, each one depending on its own specific characteristics, closely observed, exactingly made, powerfully executed. Any serious sojourn into the world of rum sooner or later arrives here. And this Diamond estate rum from Guyana is no exception.

As before, Velier adhered to their starkly minimalist presentation, and continued their admirable practice of providing a fair bit of information on the stiff cardboard box: fifteen years ageing in situ, metal-coffey-still distillate set to age in 1999 and bottled in 2014, with an outturn of 1137 bottles from four barrels, and a 72% angel’s share loss. Note that the barrels in this case where charred new oak, which might be an effort to impart more and intense flavours to the distillate, in a shorter time period. 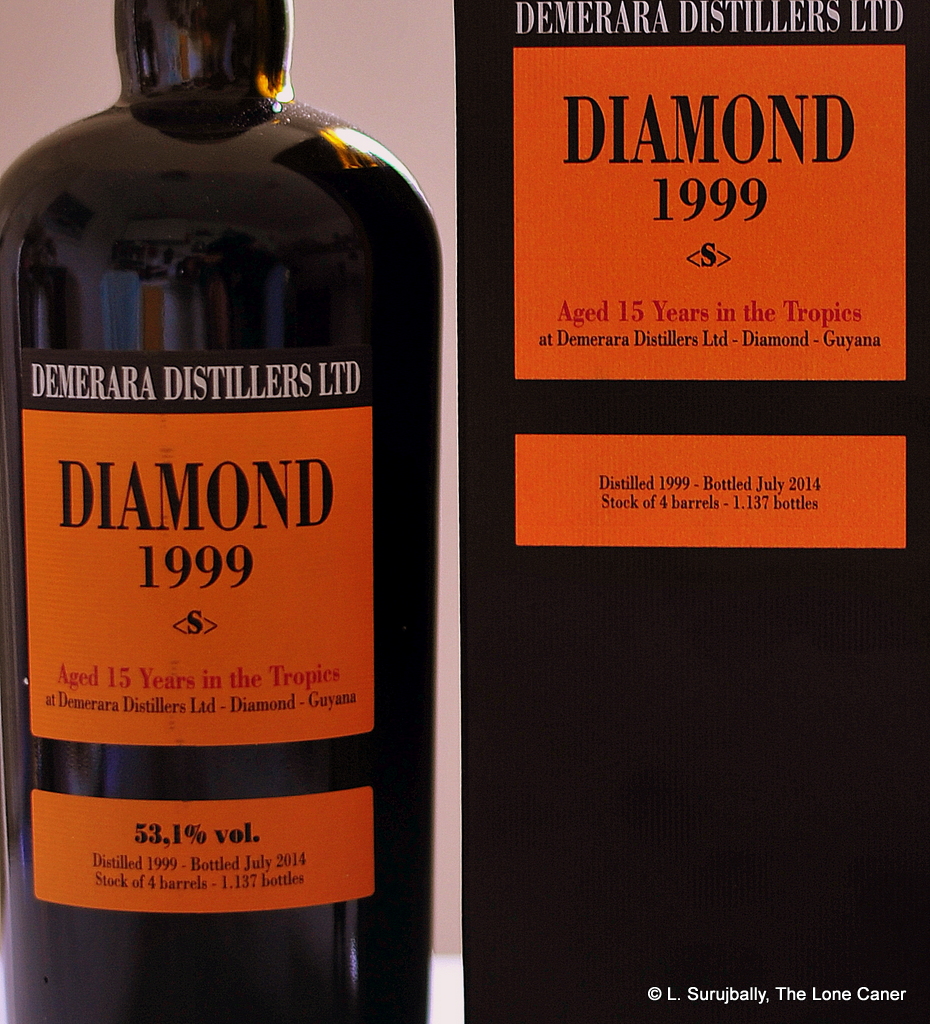 If that was their intention, they sure as hell succeeded. I thought the UF30E and the Skeldon had deep and intense aromas, but they had been aged for a century in rum years, were bottled at greater than sixty percent, and it was to be expected. Here we had a 53.1% ABV rum aged for half as long, and yet the scents just poured and billowed out of the bottle even before I had a chance to tip some in my glass. The dark, smooth and heavy nose (which mirrored the dark, smooth and rather heavy liquid) was immediately redolent of plums and apricots, vanilla and nutmeg. No notes of citrus here, but pineapple, and cloves, then backed up by raisins and some very faint licorice, coffee and a whiff of mocha. It had the rich, plush nasal glissades akin to the soft crumpling of your disposable income, and was the kind of nose one just wanted to continue savouring.

As for the taste, oh man, this dark red-mahogany rum jiggled the jowls and rattled the rump like a revel dancer tramping down Vlissengen Road on Mash day. It was smooth with some spice and heat (both proof and oak showed their biceps here), thick, oily, tarry, full bodied. Licorice, smoke, vanilla (not much), raisins, black grapes, rounded out with lighter floral notes started off, darkly sweet and all-round excellent, displaying a kind of exquisite zen-like brutality I couldn’t help but appreciate. And it didn’t stop there either, but continued providing flavours of dark chocolate, coffee, hibiscus and poinsettias in full bloom, as if you were at some kind of tropical Starbuck’s. I think Velier’s tamping down the volts on this rum was the right decision – I don’t believe that a higher proofage would make this as good a dram as the current strength does…more intense, yes, but not necessarily as memorable. And closing things off, the finish was fittingly long, warm, providing that last fillip of leather and oak, smoke, red wine, licorice and anise. 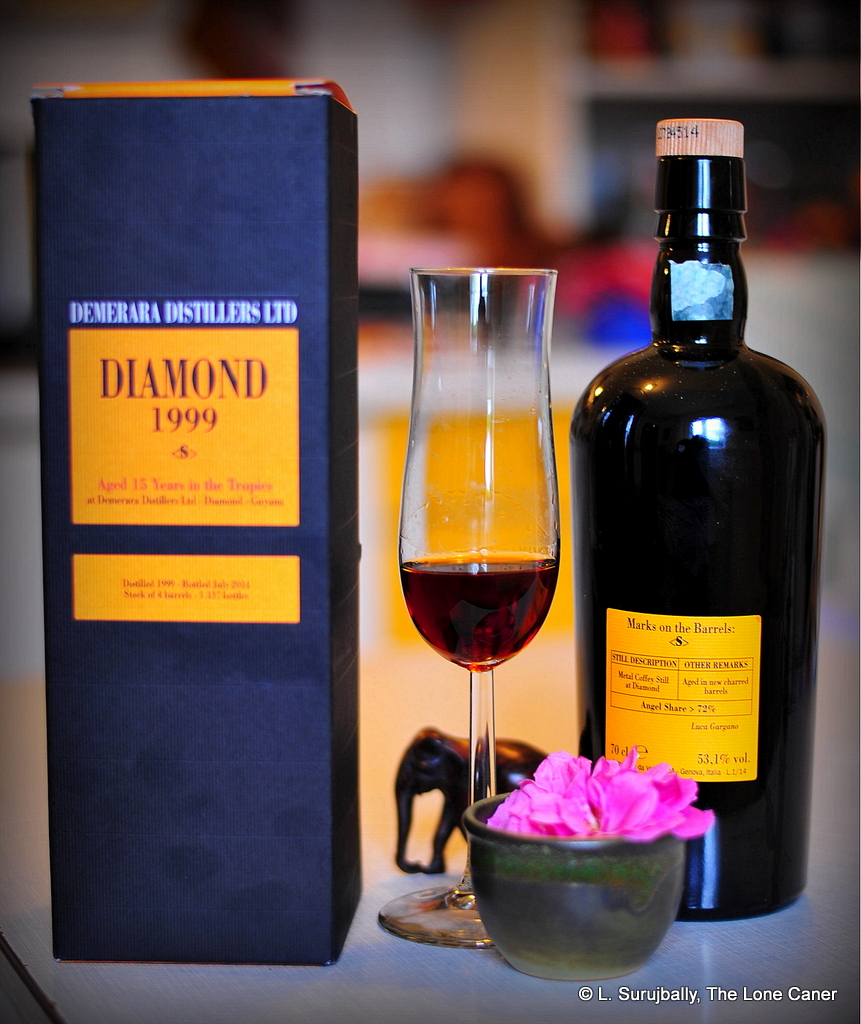 Honestly folks, I was impressed as hell. Just to be sure, I ran the Diamond 1999 past four other Veliers in my stash, and still it stood up damned well. It was somewhat like the Diamond 1996 (but better), and, as with the Blairmont 1991, it developed over subsequent sampling. It rewards re-tasting and comparisons, astounds and amazes, and like my wife, grows better with time and experience. It growls and gurgles and purrs hard love down your throat, never crosses over to malignant sharpness and bite, shows the heights to which rums can aspire when made with verve and flair and daring, and is simply one of the most phenomenal rums I’ve tried in the last two years. If after two minutes of sampling this thing you aren’t jumping around the room rocking your air guitar like my nine-year-old son and looking for online big-hair wigs, carefully peruse the mail from your insurance carrier. It might have “Deceased” stamped on it.

Velier has dropped the “Full Proof Old Demerara Rum” from the labelling for some reason.

The <S> on the label relating to the marks on the barrel is obscure. Marco’s phenomenal essay on the Guyanese distilleries speculated it might be related to the diamond logo <> surrounding the single initial of the plantation’s previous 18th century owner, Samuel Welch. Or maybe that of M. Steele, another 19th century proprietor. The question remains open.

This was the second of four samples Luca Gargano sent to me personally in September of 2014 when he heard I would be in Europe in October of that year. Next time I’m out in the real world I’ll pick up a couple of bottles of my own, I think. Maybe even three or four.