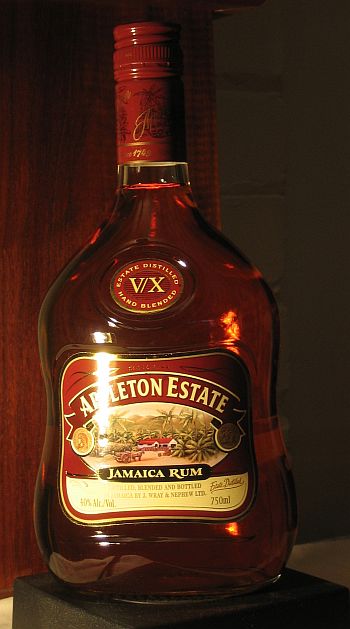 The V/X is an ostentatious shot across the bows of Bacardi – it may be one of the world’s best mixing, use-for-anything rums that you will have no trouble picking up anywhere, but the spicy sting in the tail makes it unsuitable for sipping.

It’s always the same: the cobbler’s kids have no shoes, the accountant doesn’t do his own taxes, and this reviewer doesn’t review a rum he’s been drinking for years. I mean, you’d think by now I would have rounded off the Appleton section by at least attempting a review of the V/X, which may arguably be one of the best known and most consistently purchased rums in Calgary. Some fifty four reviews along, and I still haven’t bothered, even though I have a 1.75L jug in my house at all times for those occasions when I don’t feel like paying attention, or when forty-plus guests arrive and I need something that will go well for everyone, and with which all are familiar.

From the preceding remarks you’ll gather that Appleton’s V/X is pretty much a working man’s drink, a mixer, blue-collar for sure, suitable for those who don’t want to indulge in the more premium lines, don’t have the bling to blow, or simply don’t care. And that’s perfectly fine – hell, do you honestly believe that everyone who likes rum only goes for the top end, all the time? The thing is, the V/X, for what it is, is good. It makes no pretensions to grandeur; does not make any claims to a premium or sipper status, and represents the Appleton Estate well. In this one entry-level rum, you find all the hints, tastes and blending choices which get progressively more pronounced and refined as you go up the scale of the Appletons.

The bottle is the standard bottle with which everyone is familiar. Rounded, thick waisted, fat-battied, well known. The copper-red-brown rum has a medium body, blended from fifteen different rums matured in oak barrels that previously held Jack Daniels (not bourbon). In the glass it lacks real viscosity and demonstrates thin legs that trail rapidly down the sides. I know it’s not much of a sipper, but I follow the usual procedures: and on the nose, after I let the glass stand a bit to open up and the sharpness of the initial sniff wears off, there is the brown sugar and caramel, mixed with that slight perfume of citrus which is the Appleton signature (like bananas on the Mount Gay). The smell is sharp and pungent, and you feel something a bit more raw than the rungs further up the ladder: all pretty much par for the course. On the palate the rum is not smooth (were you seriously expecting it to be? come on, be serious), but the citrus notes balance well with the burnt sugar, caramel and a slightly fruity tang. I’ve heard some people taste nuts, but not me.

What you do get is that slight bitterness from the oaken tannins that so characterizes the Appleton rums, and in this entry level rum, it comes earlier. It continues through to a spicy finish that is more sting than burn (for those who ask what the difference is, a sting is like sharp cat’s claws, short, sharp and painful; a burn is more like a mellow kind of deep, long lasting not-quite-pain which is like a hot cup of tea carving its way into your system), and for this reason, it’s no surprise that Appleton V/X is more mixer than sipper. Some brave souls might like it with just ice, which is fine: it’s more complex the more you stick with it, and for this reason, I want to express my opinion that it’s one of the more underrated rums around. A mixer, yes…but still underrated, like the English Harbour five, for example.

Almost everyone I know in Canada has, at one time or another, tasted the V/X. It is a constant feature at parties (thrown by people of any nationality), and one of those staples of the drinking season one remembers fondly as one moves up the quality scale. Like Bacardi, it is a rum made to please many: it has good body, a unique taste, and is good to mix with just about anything. You won’t want to drink the V/X straight – it’s not designed for that – but in any kind of cocktail (and even just the old standby of rum and coke), it performs superbly, each component of the drink enhancing the other; you can simply stretch out on the veranda, watch the sun set and forget your worries for a bit, with a glass of this excellent bottom-feeder in your hand. And I say that because I do that on just about every Friday evening, and it’s the V/X I reach for the most often when I do.