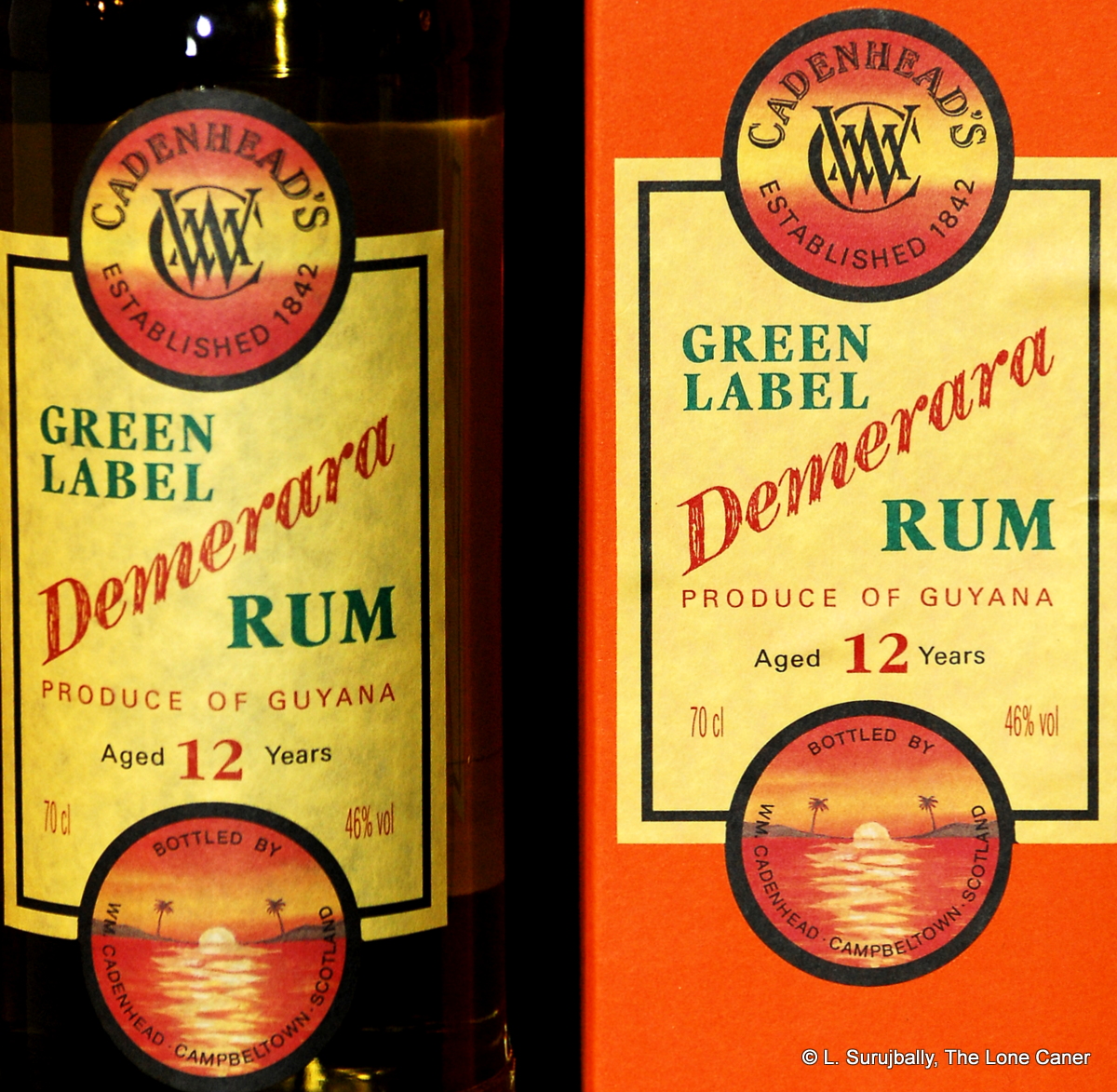 A dry, slightly overproof schizophrenic rum that is just on his side of being a whisky, and not recommended for purist rum mixologists who like their libation darker and sweeter.

Rum is traditionally matured in used bourbon or other whiskey barrels, but this is the first one I’ve ever seen and tasted which was finished in a Laphhroaig cask. Was that an accident? Did it just sort of slip and fall over and said “Oops!” as it boinked into a cask of whisky? I dunno, but Cadenhead Green Label 12 yr old Demerara rum is a rum with an identity crisis, a crazy overproof schizo that doesn’t know what the hell it is, and, like the Green Label Classic we tried way back in February 2009, it does not rank high on our list in spite of the $83 price tag.

The source of this pale yellow rum is rum from Guyana (I wonder if DDL has been sneaking into Scotland again), and part of its claim to fame – aside from the aforesaid Laphroaig casks and some water brought in to bring it down (up?) to drinking strength – is an absolute lack of additives or subsequent processing of any kind to make it a different colour, or adulterate the taste in any fashion. This was also a characteristic of the Green Label Classic we had last year, except in that case it had no age statement. Both are made by the Cadenhead Distilleries now owned by the Campbelltown distiller J.&A. Mitchell and Co., which runs the Springbanks distillery in Argyll, and is primarily a single malt brewer. One is left to wonder whether they are copying Bruichladdich’s Renegade line, or indulging in some experimentation of their own. 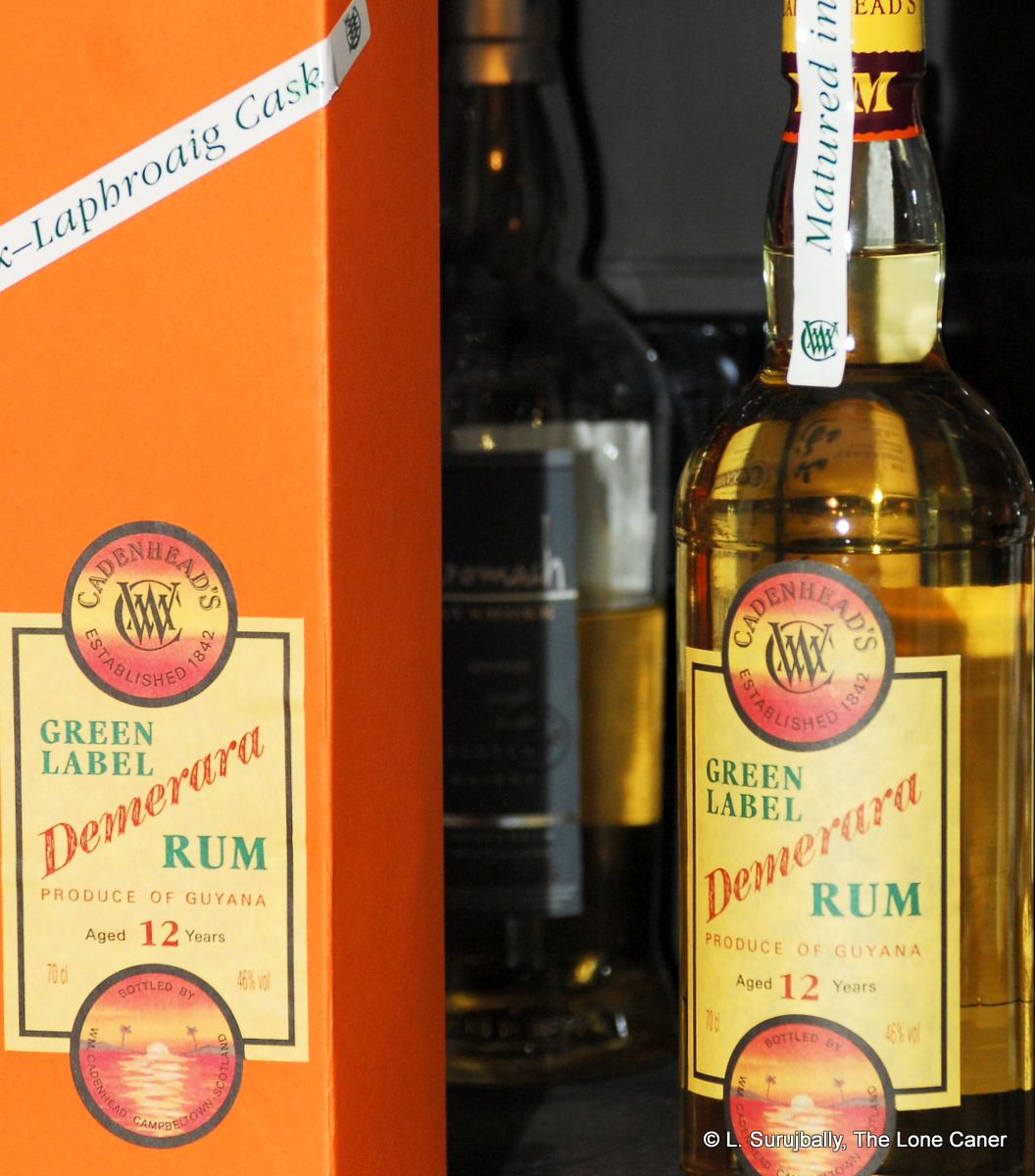 Appearance wise, the Classic was actually better, with a rounded cardboard box; this one was a fairly straightforward design and label of rough paper. A lot of the pale liquid inside was visible, and I imagine that alone would catch many an eye more used to darker hues. The nose is sharpish, not quite medicinal, but not gentle either (the rum is 46% so that’s certainly part of it), and asserts its woody character without apology. I’m not a whisky drinker by habit (I’ve tasted enough to get the rudiments down and one can’t be a member of Liquorature without picking up something about Scotches) and I have no real sense of Laphroaig aside from its peatiness – I imagine that the woody bite I got on the nose hearkens to this. It opens up after a while, revealing a fruity note, leavened by – I swear! – sea salt. Like I said…not a normal rum.

The taste to me is flat out whisky. There is no way I could do a blind test on this and know it was a rum except, perhaps, for the slightly sweet hint to it which is uncharacteristic of whiskies as a whole. It’s dry as hell, as arid as the Sahara, and yet there again was that salty-brine undernote. It burns and stings of oak, finishes in the same fashion – dry and burning – and this is where I question the decision not to do any further processing on it. Aside from some kind of purist’s bragging rights, what exactly has this decision led to? Not a rum, to me, but some kind of bastardized in-the-middle product that isn’t fish or fowl.

The peat-heads in the group were vocally disapproving and dismissive – even contemptuous – in their assessment. “Motor oil.” “Rubber.” “Noses like a Barbie doll fresh out of the plastic,” sniffed the Hippie (how does he even know that smell? I wonder). I don’t know if they actually disliked it, smelled and tasted what they said, or were afraid that rums were starting to approach whiskies in taste and nose and were terrified of the thought, but to my mind the comments were just a shade harsh.

Myself, I must admit to sort of liking it. Oh, don’t get me wrong, it’s not quite my thing, and I wouldn’t blow another eighty bucks to add it to my “special” shelf where I keep the stuff I really like (as opposed to those bottles I buy to review and share) – but there’s an odd underlying harmony to the balance of driness and sweetness in the Green Label 12; and the depth imparted by the slight overpoof nature of the rum added to a profile that I found just intriguing enough not to dislike it outright. Not quite recommended, unless you’re in the mood to buy something really different, but you won’t be entirely disappointed with it if you do.