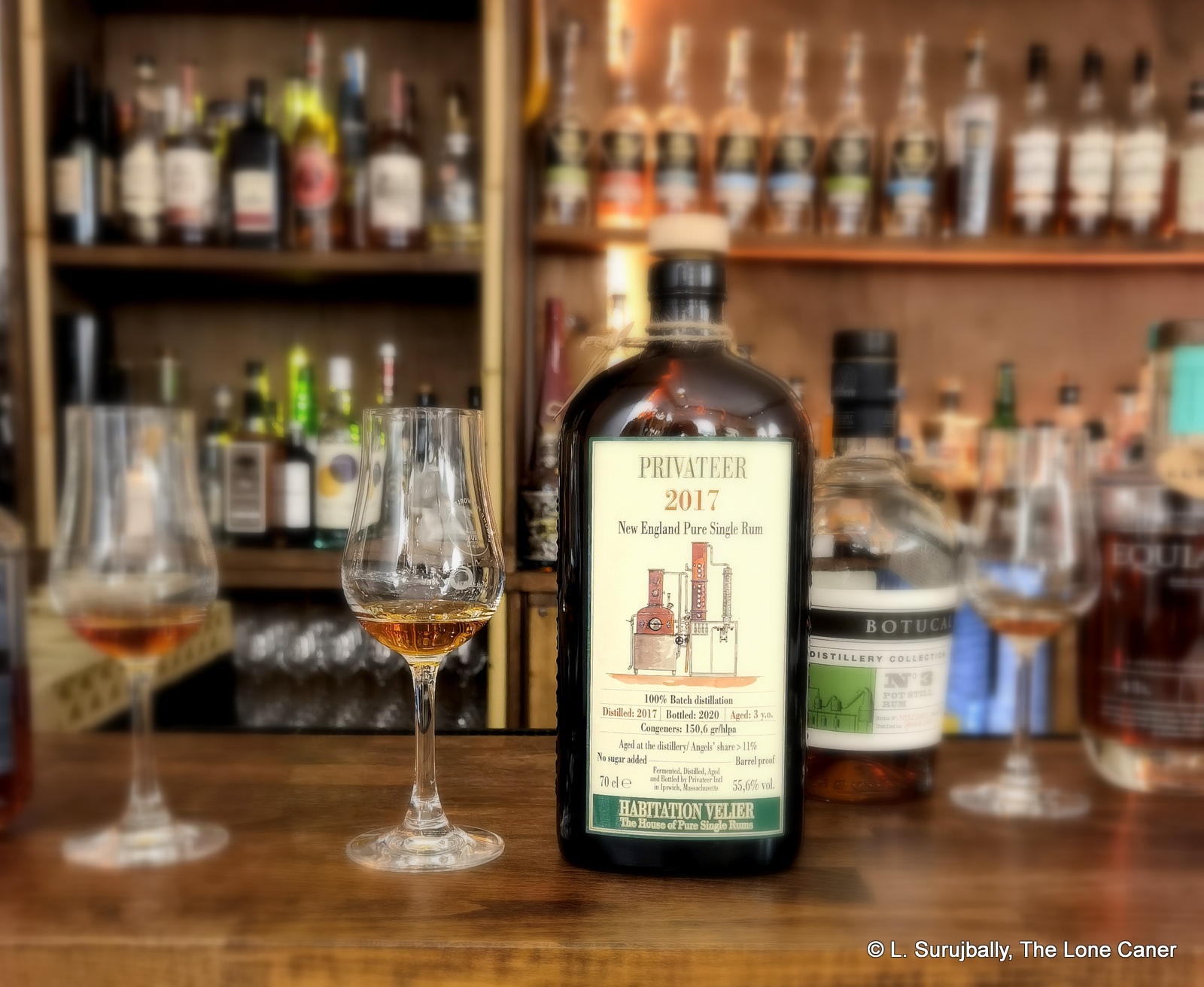 Few in the rum world are unaware of the little rum company in Massachusetts called Privateer, so indelibly has it made its mark on the American rum scene. Maggie Campbell, the former master distiller there (as of late 2021 she is in Barbados working for Mount Gay) put her stamp on the company’s reputation quite firmly via a series of releases with evocative names like Distillers’ Drawer, Queen’s Share, Bottled in Bond and Letter of Marque (among others). And Privateer, like Velier, Savanna, Foursquare and others, had learnt of the value of limited editions, regularly released – they stoked excitement, tickled the collector’s avarice, and if one didn’t please, well, there was always another tweaked edition coming along soon. 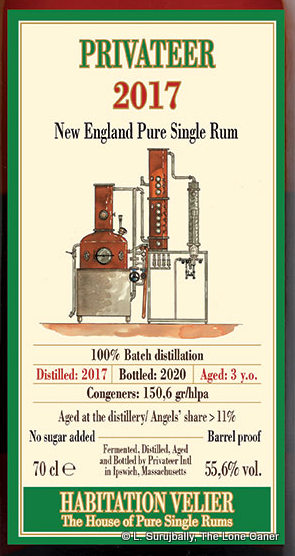 After reaping many plaudits for their rums since opening for business in 2011, Privateer got yet another feather in its cap in 2020 when Velier sourced eight casks from them (three from 2016 and five from 2017). This purchase was for inclusion in the well-regarded and influential Habitation Velier series of pot still rums, and 1197 bottles of a blended 3 YO rum were released at 55.6% ABV in 2020. Whether the intersecting forces of a well-regarded (but young) American rum, pot stills and the imprimatur of Velier were or are enough to justify the price tag it commanded has dominated most discussions about the rum since it became available.

So let’s get right to it. Nose first, as always: it is straightforward with caramel bon bons,m toffee and light molasses, underlain by very light floral hints. Vanilla and lots of tannins and wood sap jostle rudely alongside, and with some effort, after a while, you get some fruity elements – cherries, yellow mangoes (the Indian or Sri Lankan kind with that odd tart snap to the aroma that always reminds me of sharp crackling ozone) and peaches – but it’s something of a thin soup with too much bite, like one of those scrawny rice- eating flea-bitten mongrels from the ghetto that snap as soon as look at you.

The palate is better, perhaps because by now you’re used to things as they are and adjusted. Here we have nuts, peaches, syrup, more vanilla, more tannins (though not as overbearing) and a rum that feels more solid, thicker, more emphatic. Some unsweetened chocolate and bitter coffee left too long in the percolator round out the profile. The whole thing comes to an end with a finish that is satisfactorily long, nutty with sweet/salt caramel notes, and a final touch of fruit to give it some semblance of complexity. 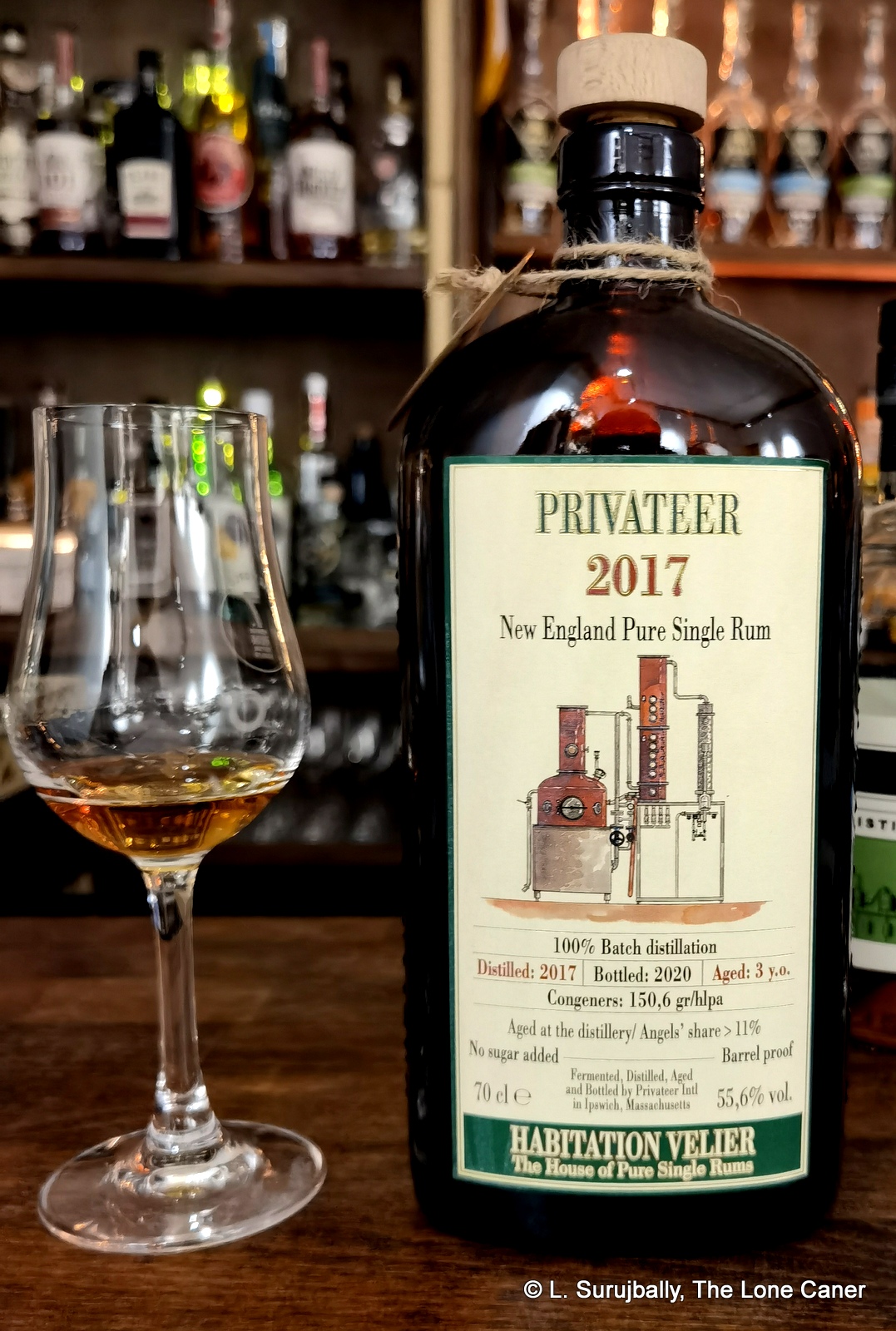 Speaking for myself I think this is a rum that’s still too young, and there’s really not enough depth. The rum has presence, sure, but what in some rums is a good thing (a few core flavours, masterfully assembled) here just feels like an uneasily married series of pieces jumbled together. The strength is too high for what it attempts (not often I say that, admittedly) and the oak is very noticeable. That said, the Privateer 2017 is a rum that many Americans might like due to its better-than-usual quality (for them) and its proximity to a bourbon (which would also draw in lovers of Foursquare) — while others elsewhere would shrug it off for the same reasons.

So far, I have not been completely won over by Privateer in spite of the accolades and social media praises (which is not to say that Maggie Campbell doesn’t earn her coverage – she does). Although their rums are excellent for their milieu where there’s a much lower bar to clear, by the exacting standards of world famous rons, rums and rhums I’ve tried, they still have a ways to go. But then, in making any kind of generalised statements about the company’s products, I do too, so this review is by no means the last word on Privateer’s rums, just my solo take on this one.