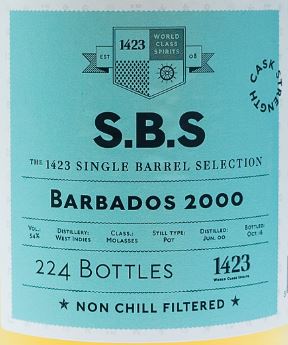 These days, most rumistas are aware of the Scandinavian company 1423 and their upscale rum brand of the SBS (Single Barrel Selections, even though they sometimes aren’t). In the last five years this small Danish outfit has become a much bigger Danish outfit, not just bottling the upmarket connoisseur’s series of the cask strength single barrel releases, but whole blended lines like the Compañero rums, and occasionally horse trading barrels and supplies with other companies (the Romdeluxe R.1 Wild Tiger, for example, was originally a 1423 import).

But back when this Barbadian rum came on the scene in 2016, they were known primarily in Denmark, even though they had already been in the business of bottling and distribution for eight years by then and had had some success on the larger European rum scene. Not surprisingly, they bought and buy barrels from European brokers (like Scheer, of course…after all, who doesn’t?) and perhaps what enthused them about the Bajan barrel were the stats: distilled in 2000 at WIRD, sixteen years old, a solid 54%, enough for 224 bottles, and deriving from a pot still. That last might have clinched the sale, since most of what the drinking public was getting from the island at that point was pot-column blended rum. A pot distillate was something rather more interesting.

The year 2000 delivered quite a few Barbadian rums from WIRD to the indie scene: Serge looked at a Cave Guildive 2000-2015 version in 2017 (87 points), one from Whisky Broker a year later (86). Single Cask Rum has probably reviewed the most, here, here, here and here, with the attendant curiosity of referring to them as originating off the Rockley Still when they likely are not (see discussion below this post). Be that as it may, they were and remain quite unique in taste, and this one was no different. The initial nose, for example, started off very traditionally with papaya, bananas, fresh whipped cream…and some light petrol, diesel on a hot asphalt road, and tar fumes. There were hints of something medicinal, iodine-like and almost peaty notes, but very much in the background (where it belonged, trust me). Resting and coming back suggested we had just gone down the rabbit hole and entered the Hatter’s Tea Party: cookies and cream with some green tea, cucumber sandwiches on white bread (no crusts), delicate florals, light fruitiness and it was all I could do to not to think that this had one of the most completely weird aromas I’d experienced in quite a while — which is not, you understand, a bad thing…just an unexpected one.

Anyway, it must be said that the taste was better behaved. Again there was that fruity line coiling around the slightly heavier creamier notes. Citrus, tangerines, kiwi and pears set alongside vanilla, salt caramel, dark honey and Danish cookies. Also bananas and papayas plus a touch of tart and unsweetened yoghurt, very well balanced. The medicinal, rubber, petrol and tar notes took a step backward here, so that while they could be sensed, they didn’t overwhelm – still, they distracted somewhat, and the integration into the greater whole wasn’t of the best. The finish was fine, redolent of iodine and soya, gherkins and again, all those light fruits and a touch of whipped cream and cookies.

The rum, then, was quite original, and now, reading around the other reviews of that year’s products after tasting mine, it doesn’t seem my experience was unique. This was certainly some kind of pot still action, and while it could have been made better, it wasn’t a bad rum. Last week I remarked on the weakness and flaccidity of a standard strength 8YO WIRD rum released in 2003 at 42%. I always hesitate to put the blame of such mediocrity solely on the level of proof and years spent sleeping — because many other things impact profile, light rums do have their charms, and those who specialize in wines and lower strength spirits can often find much to enjoy there. But when one tries another WIRD that is aged twice as long and nearly half again as strong, from another still, the impacts of age and strength and apparatus are undeniable. The SBS Barbados 2000 is not a top tier rum, it’s still seeking a balance it never finds – but it sure isn’t boring, or forgettable. 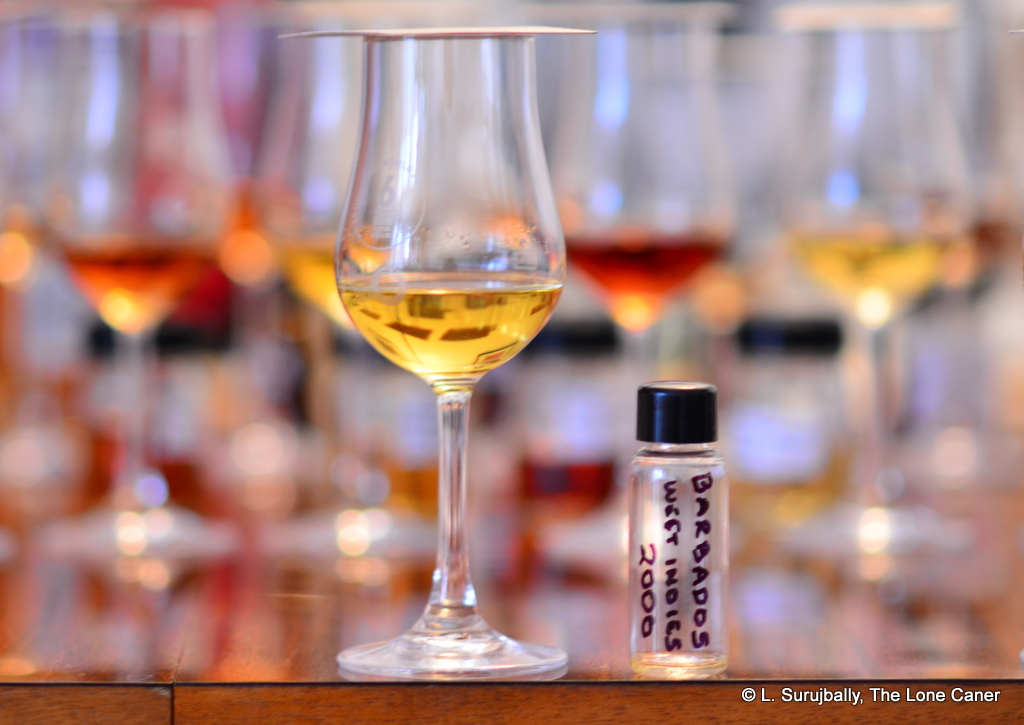 Many producers, commentators and reviewers, myself among them, refer to the pot still distillate from WIRR/WIRD as Rockley Still rum, and there are several who conflate this with “Blackrock”, which would include Cadenhead and Samaroli (but not 1423, who refer to this rum specifically as simply coming from a “pot still” at “West Indies” – one assumes they were still getting their knowledge base up to scratch at that point, and Joshua Singh confirmed for me that it was indeed a “Blackrock style” rum).

Based on the research published by Cedrik (2018) and Nick Arvanitis (2015) as well as some digging around on my own, here are some clarifications. None of it is new, but some re-posting is occasionally necessary for such articles to refresh and consolidate the facts.

Secondly, there is a “Rockley” pot still, which had possibly been acquired by a company called Batson’s (they were gathering the stills of closing operations for some reason) when the Rockley Distillery shuttered — Nick suggests it was transformed into a golf course in the late 1800s / early 1900s but provides no dates, and there is indeed a Rockley Resort and golf club in the SE of Bridgetown today. But I can’t find any reference to Batson’s online at all, nor the precise date when Rockley’s went belly-up — it is assumed to be at least a century ago. Nick writes that WIRD picked up a pot still from Batson’s between 1905 and 1920 (unlikely to be the one from Rockley), and it did work for a bit, but has not been operational since the 1950s.

This then leads to the other thread in this story which is the post-acquisition data provided by Alexandre Gabriel. In a FB video in 2018, summarized by Cedrik in his guest post on Single Cask, he noted that WIRD did indeed have a pot still from Batson’s acquired in 1936 which was inactive, as well as another pot still, the Rockley, which they got that same year, also long non-functional. What this means is that there is no such thing as a rum made on the Rockley still in the post-1995 years of the current rum renaissance, and perhaps even earlier – the labels are all misleading.

Yet, as Cedrik so perceptively notes, even if there is no such thing as a Rockley-still rum, there is such a thing as a Rockley style. This has nothing to do with the erroneous association with a non-functional named still. What it is, is a flavour profile. It has notes of iodine, tar, petrol, brine, wax and heavier pot still accents, with honey and discernible esters. It is either loved or hated but very noticeable after one has gone through several Barbados rums. Marco Freyr often told me he could identify that profile by smell alone even if the bottler did not state it on the label, and I see no reason to doubt him.