Given the backward Prohibition-era-style rules governing alcohol in the US, Americans rightly sigh with envy when they see the rum selections in Europe. To get their favourite rums, they have to use any number of workarounds: bite the bullet and go over in person to buy some; have somebody mule it; come to an arrangement with a local liquor store in their state; or, heaven forbid, courier it – a tricky and not hazard-free process, I assure you.

But occasionally the situation goes in reverse, and it’s the Europeans who grumble at the luck of the Yanks. Ed Hamilton’s little indie operation of eponymous rums is one of these. Although perhaps the most renowned for the 151 Demerara rum (which went head to head with Lemon Hart in the early 2010s and has remained a bar staple ever since), the Collection also includes a Worthy Park edition, a Navy rum, a white rum, a New York blend, even a pimento liqueur…and several years’ releases (from 2004 through 2009) of St. Lucia Distillers’ rums, bottled in between 2013 and 2015.

Today we’re looking at the Hamilton 2007 7 year old rum sent to me by my old schoolfriend Cecil Ramotar, which can be considered a companion review to the 2007 9 year old I wrote about four years ago (but of which I still had a smidgen for comparison purposes…in the name of science, of course). Like its older brother, the 7 YO came off of SLD’s Vendome pot still in September 2007 and set to age in ex-bourbon casks, shipped to the US in 2014 and bottled in January 2015 straight from the cask with additives of any kind. At a snorting, growling 60.4%, which I thought was excessive until I realized that several others in the line were even stronger.

That strength was bolted on to a firmness of profile and a solidity of taste that was really quite remarkable, and smelled, at the beginning, like I had stumbled into a high end cake shop with a fruit stand somewhere in there. There were aromas of honey, marzipan, cinnamon and unsweetened dark chocolate; vanilla and the sort of rich pastry that makes really good cookies. I wandered out back and found the fruit shelf: apples, green grapes, fanta, strawberries, and just the faintest hint of saline solution and olives, all dusted liberally with brown sugar.

Well, the nose might have been good, but taste tells the tale, right? Yes indeed. Again I remarked on its lack of sharpness, it’s lack of raw sandpaper scrape. I mean yes, it was spicy and hot, but it more gave an impression of real heft and weight rather than cutting pain. It was slightly salty and sweet and sour all at once, with the piquancy of gooseberries and unripe mangoes married to riper and more dusky fruits: raspberries and peaches and apricots. Somehow the molasses, salted caramel, brown sugar and creme brulee didn’t up-end that profile or create any kind of crazy mishmash – the integration of citrus, flowers, pastry and cereal notes was pretty well handled and even added some peanut brittle and mint chocolates at the back end, during a nicely long and aromatic finish. 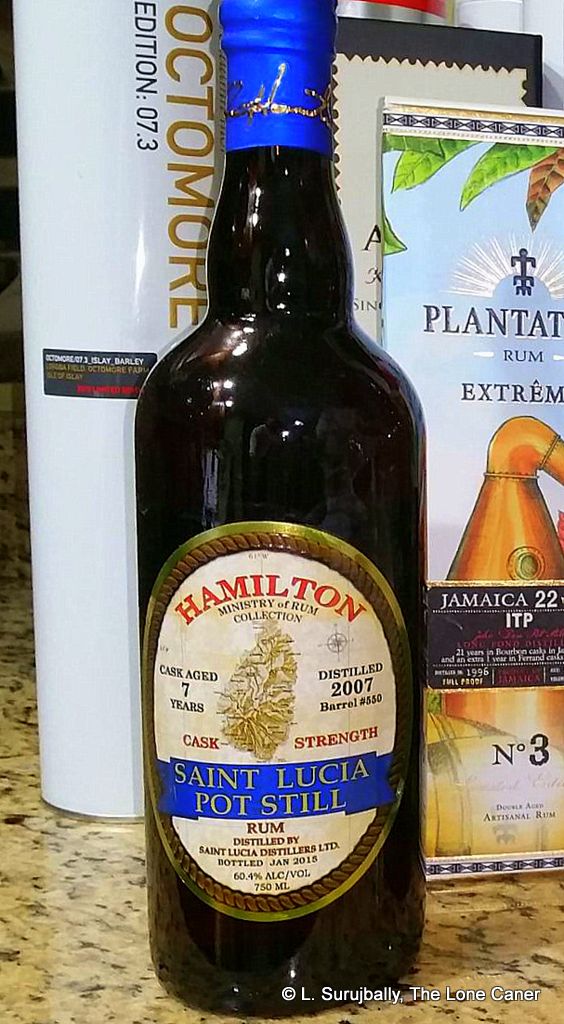 Clearing away the dishes, it’s a seriously solid rum. If I had to chose, I think the 2004 9 Year Old edges this one out by just a bit, but the difference is more a matter of personal taste than objective quality, as both were very tasty and complex rums that add to SLD’s and Ed Hamilton’s reputations. It’s a shame that the line wasn’t continued and added to — no other St. Lucia rums have been added to the Hamilton Collection since 2015 (at least not according to the master list on Ed’s site) and that makes them incredibly desirable finds in that cask strength desert they call a rum selection over there. Worse, only 20 cases of this one were released…so a mere 240 bottles hit the market, and that was six years ago.

Now, in 2021 I think these rums are a close to extinct, akin to the Stolen Overproof Jamaican which was made, sank without a trace and is regarded as something of an overlooked bargain these days. With reviews like this one and for the kind of quality I argue the Hamilton St Lucia rum displayed, it may now be seen as more desirable, but good luck finding any. If you do, I think you’d like it (though see “other notes”, below), and hopefully accept that it’s right up there with the better known rums of the New Jamaicans, Barbados or Mudland. In my mind, deservedly so.