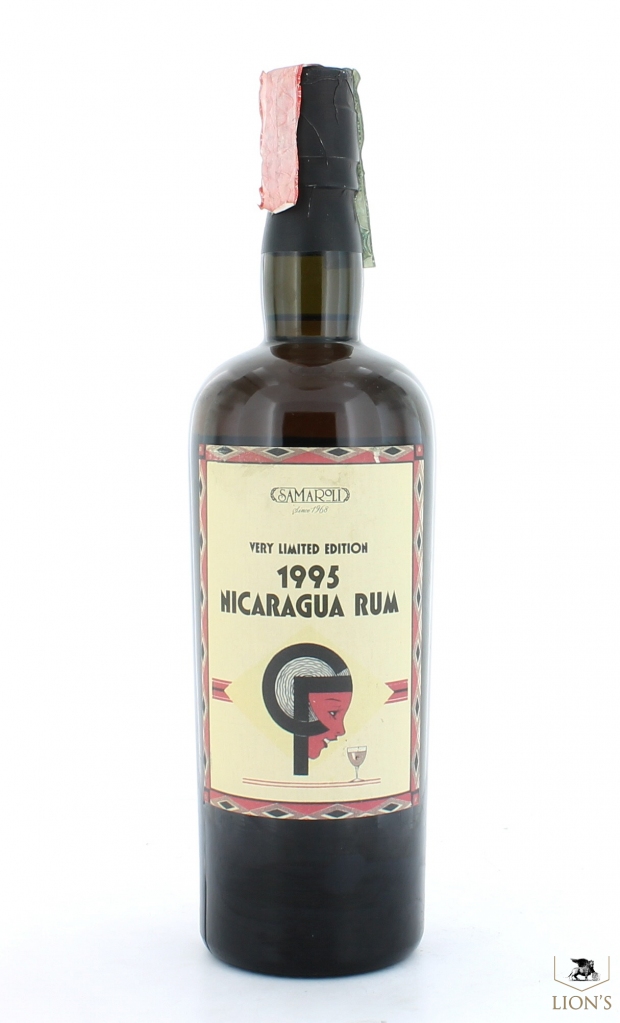 This is a rum that reaffirms my faith in the Nicaraguan rums. Nothing need be added to it, nothing can be taken away. There’s a purity and minimalism of construction here that is almost zen.

The sheer range of flavours emanating from the glass that held the Samaroli Nicaragua 1995 tickled my nose and astonished my mind. Few light coloured rums I’ve tried in the last six years were ever this rich right out of the gate. For a person whose background in Nicaraguan rum trends more to the Flor de Caña range (of which the 21 remains my favourite), this was not only intriguing, but an outright pleasure.

Samaroli is one of the first modern independent bottlers who’s still around (though Veronelli may be older), having opened its doors in 1968. As with many other Italian outfits, they initially specialized in whiskies, but in our subculture, it’s their rum bottlings for which they are more highly esteemed. There’s a certain cachet to Samaroli rums, perhaps because there were among the first to begin issuing limited edition craft bottlings for rum which were more than just by-the-way-we-think-you-might-like-this efforts done by scotch makers. Companies like Secret Treasure, Velier, Rum Nation, Compagnie des Indies are its intellectual heirs. These newer companies seem to grab reviewers’ attention, headlines and market share much more than the old guy on the block, and yet there is Samaroli, still quietly putting out the hits. Maybe it’s Samaroli’s absence from the Facebook or festival circuit. Maybe it’s their comparative rarity – this ten year old 45% rum, for example, only has 378 bottles in existence. Maybe it’s their overall quality – I have not heard a bad thing said about the decades-long rum lines. Still, it ain’t exactly cheap at €160, and that will make a lot of people pause.

All of this crossed my mind as I nosed a more-than-generous sample sent to me by that estimable gentleman from France, Cyril of DuRhum, so a big hat tip to the man.

Usually a light gold rum almost presumes a certain light sparkly diffidence…not here. Smooth thick and slightly heated aromas rose from the glass, firmly providing the initial dusting of citrus and ripe oranges, cinnamon and pepper, around which danced scintillating notes of overripe green grapes. It had a slightly nautical tang to it, of seaspray and brine, black olives…really well put together, not too heated to be unpleasant, not too faint to be unnoticeable. It did take a while to open up, but that wait was worth it – additional scents of caramel and sugar notes sulkily emerged at the tail end, as if doing me a favour. Never mind, still liked it.

Ahh, the taste of this thing….just lovely. It was medium to full bodied in texture, and the various tastes were distinct and separable and came across as sweetly as a series of precise piano notes dropping gently into a pool of silence…something by Mendellsohn, I think, or one of Chopin’s quiet nocturnes. There was absolutely no bombast or fire here, just one pure thing after another…green grapes to begin with, fleshy apricots, followed by a frisson of plums and the zest of tangerines. A little water brought out toblerone, honey and nuts…and oddly, very little brown sugar or caramel. On the other hand, well controlled oak, aromatic tobacco and vanilla rounded things out quite nicely, so no complaints there. The exit was medium long, warm but not sharp, presenting the final tastes of peaches and citrus oil and leather, and you’d better believe I wasted no time in having another sample.

The Nicaragua 1995 is an completely delicious, professionally made rum. Mr. Samaroli has always felt that as flavours increase with age the texture and body fall off, and there’s a sweet spot where age, texture and strength intersect. In this case, ten year ageing and 45% may be just about right for providing a remarkable tasting experience without overreaching. There are some who have no particular liking for Nicaraguan rums (as represented by Flor de Caña, which has gotten some flak in recent years due to its age-statement and labeling philosophy) – to such naysayers, I’d simply say that for depth of flavour and overall profile, for an enjoyable spirit that succeeds on practically every level and can be used for whatever you want, you wouldn’t shortchange yourself by trying this rum if it ever crosses your path.