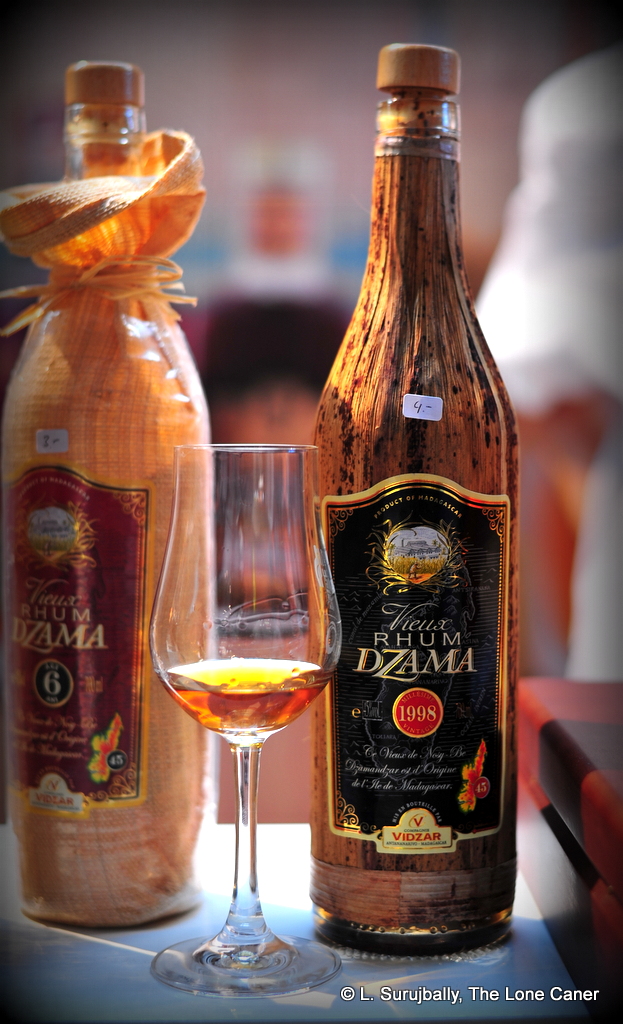 In spite of the prevailing belief that rums are Caribbean almost by definition, it’s axiomatic that many other nations and regions produce them. Over the years I’ve found that the most readily identifiable and distinctive (I don’t say “best”) products, products that have a flavour profile all their own, usually hail from some distant part of the world where climatic and soil conditions are far removed from the norm: consider, for example the Bundaberg, the Old Port, or even the Tanduay. Now sure, flavourings are sometimes added to the mix with the heedlessness of Emeril chucking spices…but not always. Sometimes it’s just the terroire.

Such a one is the Rhum Vieux Millésimé 1998 ten year old, made and bottled in Madagascar from locally grown cane and molasses, offered at 45% in a bottle that is rather amusingly wrapped in a banana leaf (or a reasonable facsimile thereof). This is a rhum that won a gold medal at the International Wine and Spirits Competition in 2012, and is one lovely piece of work.

Take for starters, the initial nose: brown sugar, coffee and mocha, straight off, very smooth and inviting – 45% was a good strength for this rum. I looked at the labelling again with some surprise – was this a spiced rum and they forgot to mention it? Nope. What you got was it. It was followed by vanilla, cloves, nutmeg and a soft background of bananas, all quite unaggressive and easygoing. There was even some vague vegetal note there after a bit, almost imperceptible.

The palate broke little new ground, simply built on that excellent lead-in: more vanilla (not enough to make me suspicious about flavouring, yet I couldn’t dismiss the thought entirely), coffee, burnt sugar, nougat. Fried sweet bananas (I loved those as a kid), nuts, peaches. This rum was lovely, just lovely – soft and warm and exactly strong enough for what it was – a higher proof might have made it too spicy. There was even, after a few minutes and a drop of water, leather and the sweet perfume of aromatic cigarillos. Some ground walnuts rounded out the profile. The finish was surprisingly short, yet still that warmth persisted, and closing notes of white pepper, smoke and those walnuts again.

I’ve remarked before that one rum does not sink a brand, or define it – yet I have to be honest and say that a bad one tends to make me leery about approaching others in the range, while conversely, a good one makes me enthusiastic to do so – that’s human nature. With this excellent rum hailing from a region I’ve not tried before, whose profile is remarkably distinctive and far from unpleasant, I’m pretty stoked to see what else Dzama has in the larder the next time I get a chance to buy one. You could do worse than trying some yourself…and this one would be an excellent place to start.