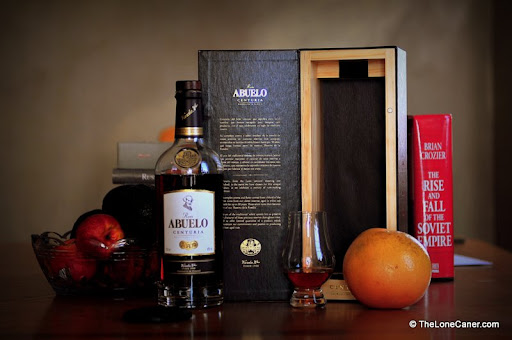 Ron Abuelo Centuria is the top of the line Panamanian rum originating from Varela Hermanos, the outfit that brought the 7 year old and 12 year old to the table, issued in late 2010 to celebrate their Centennial.

It’s said in some places to be solera-system-aged for thirty years in used bourbon barrels and in others that the blend of rums (some aged thirty years) was run through a solera: but one must always keep in mind that in any solera rum, only a small fraction of the resultant is actually that old (the math suggests it can be as little as 5% after less than ten years, and the average age of the blend trends towards seven). I make these remarks not to denigrate the product, just to inject some caution (and reality) into pronouncements regarding its age.

Not that you need to know all that, because taken by itself, this is quite a product. Ensconced in a wooden and cardboard box, in a neat bottle with a decent cork, there’s very little about it that doesn’t work. Except maybe the €155 price tag: considering that only 3000 bottles were made, this may be deemed cheap to some lucky fellows who have more money than I do.

Nose first: cherries, dark chocolate, coffee, walnuts and vanilla came right out of the initial pour of the bronze mahogany liquid. Really quite nice, but I suspect there may be some alien DNA in the Centuria somewhere, because after moving on and settling into a creamy, deep burnt sugar and caramel bedrock, there were some discordant background notes that melded uneasily with the core scents so well begun: salt biscuits and a certain musty driness (without being particularly arid) that just seemed, I dunno, out of place. It wasn’t enough to sink the Bismarck, but it wasn’t expected either. 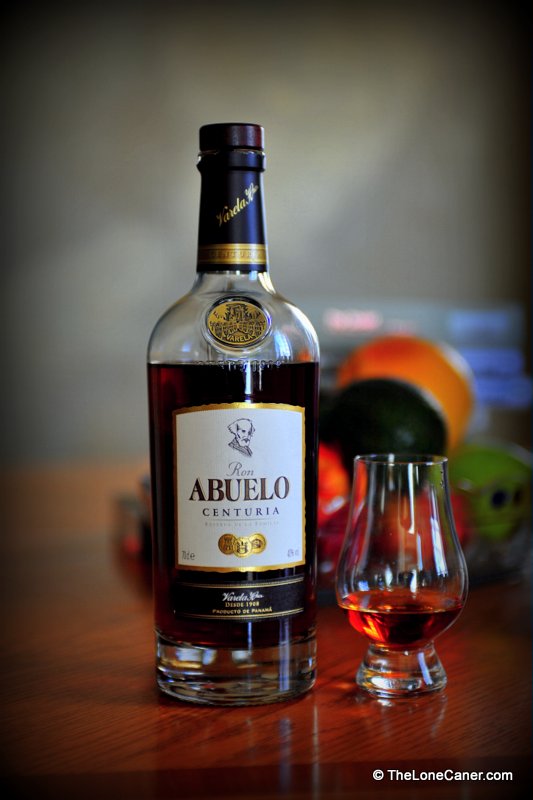 The rum raised the bar for premiums by being phenomenally smooth, mind you. Bitch and bite were long forgotten dreams on the palate, as on the nose: the Centuria may lack the furious, focussed accelerative aggro of a Porsche, but that isn’t its purpose (especially not at 40% ABV) — it’s more a fully tricked-out Audi sedan, as smooth and deceptive as proverbially still waters. Caramel, nougat and burnt sugar flavours led in, followed by a slow segue into a combined smoky, salt/sweet set of tastes reminding one of pecans and dried fruits like dates and figs, not fleshier ones like peaches. In fact, this became so pronounced as to almost dismember the sweeter notes altogether (but not quite,which is to its real credit – great balance of the competing flavours was evident here).

The exit is more problematic: though quite long for a rum bottled at standard strength, there’s something of that buttery caramel salty-sweet tang that doesn’t quite click for me. Yes it was pleasantly heated and took its time saying adios, which is fine — I just didn’t care for the musky, flavours so remniscent of a peanut-butter-and-chocolate energy bar. I should hasten to add this is a personal thing for me, so you may like this aspect much more than I do. And I can’t lie – it’s a damned fine rum, a more-than-pleasant fireplace drink on a nippy night, leading to deep kisses and warm embraces from someone you’ve loved for a very long time. 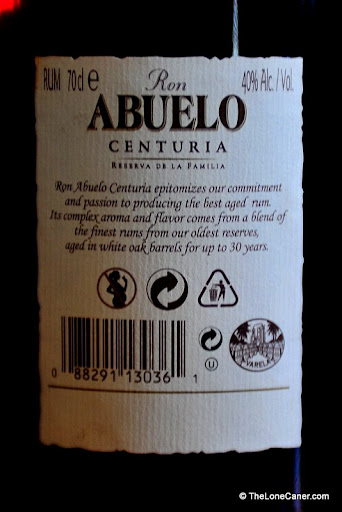 I often make mention, with top end rums that cost three figures and up, about elements of character. What I mean by this is that the complexity of the parts should lead to a harmonious commingling of the whole in a way that doesn’t repeat old profiles, but intriguingly, fascinatingly, joyously seeks a new tier of its own, for better or worse. The Centuria has character for sure, and what that does is make it different, albeit in a manner that may polarize opinion, especially at the aforementioned back end.

Still, this rum would have, as many overpaid management types in my company would say, all the key performance indicators identified, the drivers nailed down and quantified, all the basic boxes ticked. But then there’s the fuzzier stuff, the weird stuff, the stuff that some guys would call “over and beyond” or “elevated performance”, boldly going where no executive has gone before. In this Anniversary edition rum made by a solid company with quite a pedigree, it’s clear that they’ve succeeded (all my bitching about the off-notes aside). This is an excellent sipping rum where components come together really well, are dead serious about their task of pleasing you, and have taken time out to address some real complex subtleties. This is not the best rum of its kind ever made – my own preference on the Panamanians edges more perhaps towards the Rum Nation Panama 21 — but if you’re buying what Varela Hermanos is selling, they sure won’t short change you.